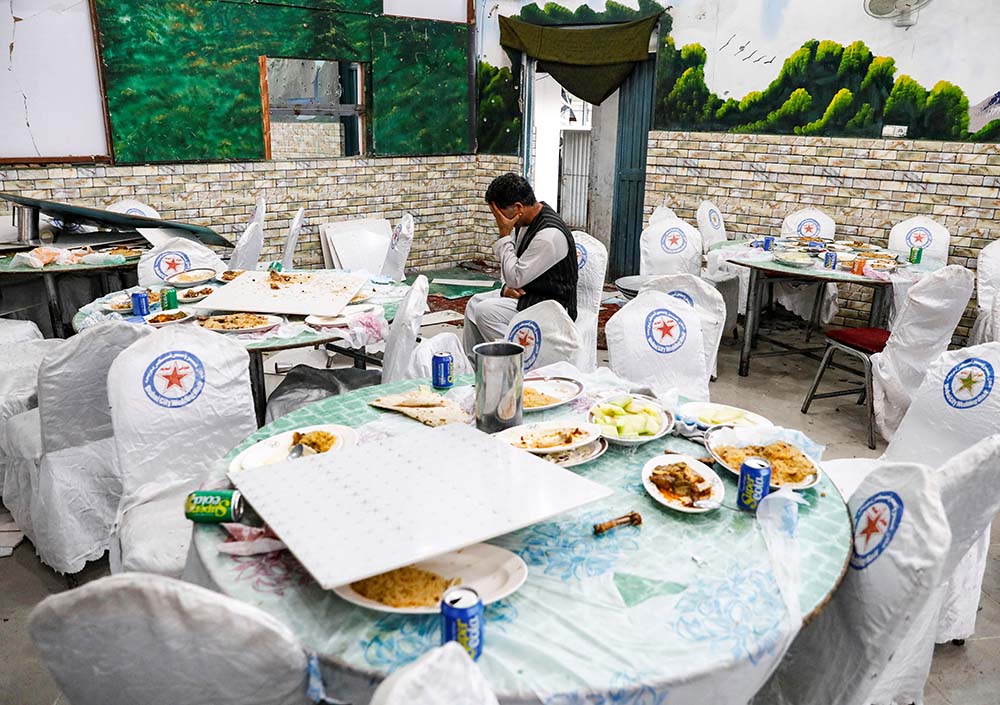 A suicide bomber killed 63 people and wounded 182 in an attack on a packed wedding reception in the Afghan capital on Saturday night, the interior ministry said, as violence shows no sign of easing despite hopes for a deal on a U.S. troop withdrawal.

The attack came as the Taliban and the United States are trying to negotiate an agreement on the withdrawal of U.S. forces in exchange for a Taliban commitment on security and peace talks with Afghanistan’s U.S.-backed government.

The Taliban denied responsibility for the blast at a west Kabul wedding hall, in a minority Shi’ite neighbourhood, packed with people celebrating a marriage.

Women and children were among the casualties, interior ministry spokesman Nasrat Rahimi said on Sunday.

The blast follows a bomb attack on a mosque in Pakistan on Friday that killed a brother of Taliban leader Haibatullah Akhundzada. No one claimed responsibility for that blast, which killed four people and wounded about 20.

Pictures posted on social media showed bodies strewn amid overturned table and chairs at the wedding hall, with dark blood stains on the carpet. The bomber struck the men’s reception area, officials said.

“Everybody was running,” a waiter at the hall, Sayed Agha Shah, said after the blast.

“Several of our waiters were killed and wounded.”

Resident Mohammad Hasan rushed to the scene after the blast rocked the neighbourhood.

“I saw many women and children screaming and crying,” he said.

Wedding halls have become a big business in Kabul as the Afghan economy slowly picks up and families spend more on celebrations. Big, brightly lit halls now line some suburban streets of the city.

At least 40 people were killed in an explosion at a wedding hall in Kabul in November.

Islamic State militants also operate in Afghanistan and have carried out bloody attacks in towns and cities, some aimed at members of the Shi’ite minority.

Both U.S. negotiators and the Taliban have reported progress after eight rounds of talks since late last year.

Afghan Taliban officials said on Saturday the killing of the brother of their leader in a bomb attack near the Pakistani city of Quetta would not derail the talks with the United States aimed at securing their long-cherished goal of getting foreign troops out.

Taliban negotiators were preparing for the next round of talks, hoping to resolve the last outstanding differences, the officials said. No date for a new round has been set.

U.S. President Donald Trump has made no secret of his desire for a U.S. pullout from Afghanistan and an end to America’s longest war. Top U.S. national security advisers briefed Trump on Friday on the negotiations.

There are deep concerns among Afghan officials and U.S. national security aides about the talks with fears Afghanistan could plunge into a new civil war that could see a return of Taliban rule and international militants finding a sanctuary.

Under the expected deal, the Taliban, in exchange for a U.S. commitment on a withdrawal, would guarantee Afghanistan would not be a sanctuary for militants to expand and plot new attacks, both sides have said.

The Taliban are also expected to make a commitment to open power-sharing talks with the U.S.-backed government and agree to a ceasefire.

The war has ground into a stalemate with casualties rising among civilians as well as combatants.