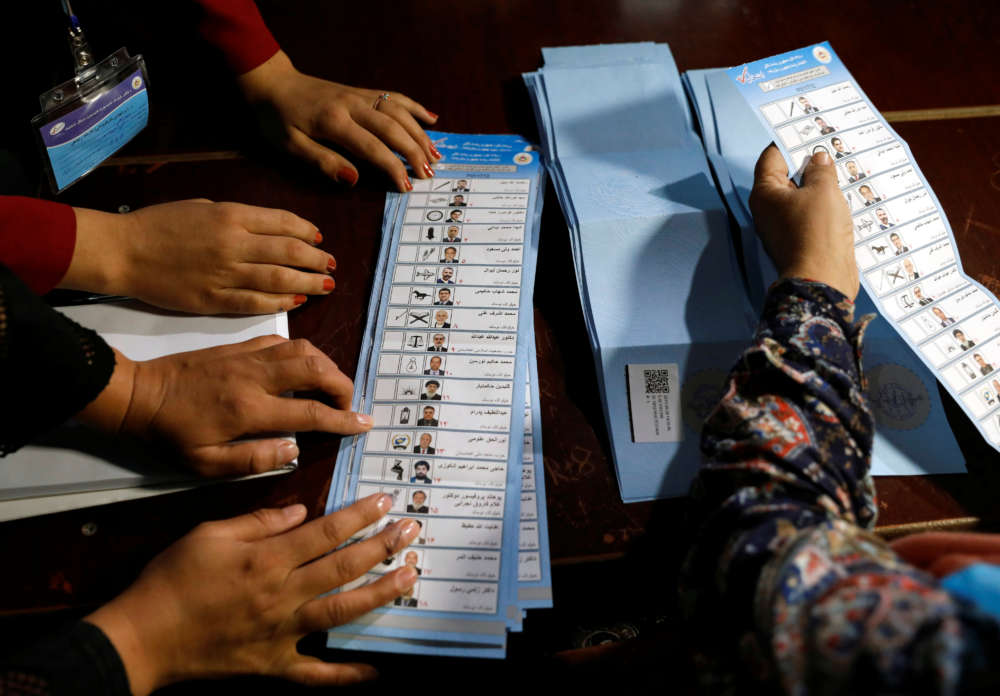 Afghans braved the threat of militant attacks and delays at polling booths to vote in a presidential election on Saturday, a major test of the Western-backed government’s ability to protect democracy against Taliban attempts to derail it.

The election was marred by numerous small-scale Taliban attacks, but only one confirmed death. Turnout was low, however, with the violence – plus earlier Taliban threats against polling stations – likely contributing factors.

Voting was extended by two hours, as the start of polling was delayed around the country with stations failing to open on time amid technical problems.

Independent election observers and activists said a slow pace to voting triggered confusion at some polling stations, with long queues forming outside.

“It took the first voter 31 minutes to vote. For subsequent voters it was taking around five minutes and then it started to streamline to 3 minutes and 30 seconds,” said Nishank Motwani, an observer stationed in Kabul.

“Election commission staff looked panicked and voters were getting angry that the queue was not moving.”

Some observers feared the Taliban had forced a partial shutdown to upset the final results as the Independent Election Commission’s (IEC), without giving a reason, said it had failed to establish contact with 901 of the 4,942 polling centres.

The hardline Islamist group, which controls more of the country than at any time since its regime fell in 2001, has warned the more than 9 million registered voters to stay at home or face dire consequences.

Saturday’s presidential vote is the fourth since the Taliban were toppled.

A dozen candidates are vying for the presidency, led by incumbent Ashraf Ghani and his former deputy Abdullah Abdullah. Due to logistical difficulties, results will not be known until Nov. 7.

The winner will play a crucial role in the country’s quest to end the war with the Taliban and any resumption of talks between them and the United States that were called off this month.

To protect voters and polling stations, tens of thousands of troops were deployed.

Abdul Moqim Abdulrahimzai, director-general of operations and planning at the Interior Ministry, said at least 21 civilians and two Afghan forces were injured in about a dozen small-scale attacks during the first hours of voting. Other attacks had been foiled, he said.

A senior Western security official in Kabul said the Taliban had not conducted large-scale attacks but had scared some voters away.

Early turnout was “very poor”, said the Transparent Election Foundation of Afghanistan, also citing as a reason the requirement for voters to be photographed, to which female voters in conservative areas objected.

Others were determined to vote.

“Bravado gets defined when one musters courage to cast ones vote,” said Kabul doctor Roya Jahangir (after casting his ballot?). “We hope this time there is no fraud.”

Hundreds of voters complained their names were missing from voters’ lists or the biometric devices used to prevent fraud. Addressing those concerns, the IEC eased restrictions, allowing anyone with election stickers on their national identity cards to vote.

An explosion at a polling station in a mosque in the southern city of Kandahar wounded 16 people, according to a security source.

In the northern province of Faryab, Afghan forces clashed with Taliban fighters in six districts, forcing people to stay indoors and refrain from voting.

The Taliban said their fighters attacked polling stations in Laghman province, in eastern Afghanistan. Officials said four explosions in the eastern city of Jalalabad, in which one person was killed, disrupted voting at some stations.

Blasts also hit Kabul and Ghazni, officials said, while more than 400 polling centres remained closed because they were in areas under Taliban control.

Western diplomats said the scale of the Islamist militant group’s election attacks would determine whether talks with Washington resumed.

“Talks can only begin if the Taliban exercises restraint and allows people to vote,” said one diplomat overseeing the elections.

Ghani cast his ballot in a Kabul high school, telling reporters: “I thank God that today that people’s vote will help the republic of Afghanistan to move forward.”

Abdullah voted at a different Kabul school. “The threats to innocent people do not show the strength of the Taliban,” he said.

Both men came to power in 2014 after a bitterly contested election marred by fraud.

Afghanistan’s political scene is still tainted by the aftermath of that vote, which forced the two main rival groupings to form an unstable partnership. Both sides were accused of massive electoral cheating.