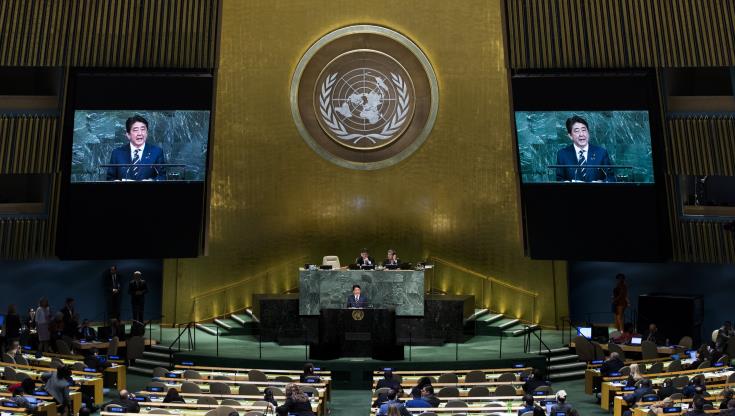 Cyprus Permanent Representative to the UN, Kornelios Korneliou, protested in a letter sent to the UN Secretary General the continuing infringements of international air traffic regulations and the violations of the national airspace and territorial waters of the Republic of Cyprus by Turkey and appealed for their immediate cessation.

“The Republic of Cyprus reiterates, in this respect, its call for adherence to the principle of sovereignty and non-interference enshrined in the Charter of the United Nations`, Korneliou said in the letter dated 2 April 2018.

Korneliou transmitted two documents detailing the infringements of international air traffic regulations and violations of the national airspace of the Republic of Cyprus by Turkey and the illegal use of closed ports by Turkish warships during the month of February 2018.

“It should be noted that Turkish commercial aircraft systematically use the illegal airport of Tympou. In addition, Turkey continues to systematically harass civilian and military aircraft within the Nicosia flight information region (FIR) via radio calls. Meanwhile, Nicosia FIR infringements and violations of the national airspace of the Republic of Cyprus continue unabated,” he added.

He noted that “Turkey’s policy of persistently breaching international law and defying international rules and regulations puts the safety of international civil aviation at risk, has a negative impact on the stability of the region and causes difficulties for air traffic over Cyprus.”

In that respect, he added, “I would like to underline, once again, that there is only one legal authority in Cyprus, the Republic of Cyprus, as stipulated in various Security Council resolutions, in particular resolutions 541 (1983) and 550 (1984), in which the Council declared the establishment of the so-called `TRNC as null and void.”

Furthermore, Korneliou urged Turkey and the Turkish Cypriots to heed the calls of the international community and contribute to a meaningful resumption of the peace process, instead of focusing on undermining the sovereignty of the Republic of Cyprus, bolstering the continuing de facto division and upgrading the secessionist entity’s status.

Korneliou requested that the letter and its annexes circulate as a document of the General Assembly, under agenda item 44, and of the Security Council.

By In Cyprus
Previous articleAlpha Bank Cyprus Ltd was the Main Sponsor of the 8th Nicosia Economic Congress
Next articleStrovolos murder: No motive, no weapon and no suspects