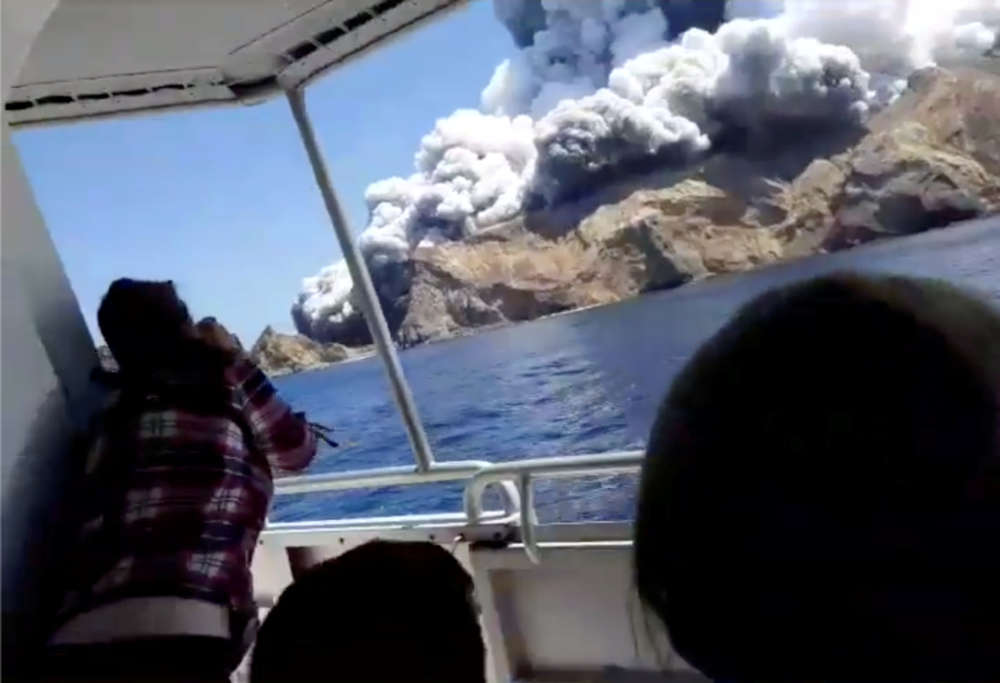 New Zealand police launched an investigation on Tuesday after a volcanic eruption on an island popular with tourists killed five people, injured more than 30 and left eight people missing, who are presumed dead.

Prime Minister Jacinda Ardern said reconnaissance flights showed no signs of life on White Island, as eyewitnesses detailed the horrific burns suffered by survivors, most of them tourists.

“The scale of this tragedy is devastating,” Ardern said in parliament. “To those who have lost or are missing family and friends, we share in your grief and sorrow and we are devastated.”

Police said 47 people were on the island at the time of the eruption – 24 from Australia, nine from the United States, five from New Zealand, four from Germany, two each from China and the UK and one from Malaysia.

“I would strongly suggest that there is no one that has survived on the island,” police Deputy Commissioner John Tims said of the eight people still missing.

Of the injured, at least 27 suffered greater than 71% body surface burns, and some could succumb to their wounds, said Peter Watson, the government’s chief medical officer.

Burns units across the South Pacific nation of 4.5 million are full to capacity, he added.

Police said an investigation into the deaths on White Island had been launched but clarified it was not a criminal investigation.

A crater rim camera owned and operated by New Zealand’s geological hazards agency GeoNet showed one group of people walking away from the rim inside the crater just a minute before the explosion. Other images showed the explosion that shot an ash plume some 12,000 feet (3,658 m) into the air.

“It’s now clear that there were two groups on the island – those who were able to be evacuated and those who were close to the eruption,” Ardern said at a morning news conference in Whakatane, a town on the mainland’s east coast, about 50 km (30 miles) from White Island.

Later, in parliament, she paid tribute to the pilots of four helicopters that landed on White Island in the aftermath of the eruption to bring out survivors.

“In their immediate efforts to get people off the island, those pilots made an incredibly brave decision under extremely dangerous circumstances,” Ardern said. “I suspect their own personal safety was the last thing on their minds.”

Since then, rescuers have been unable to access the island, which is covered in grey ash. GNS Science, New Zealand’s geoscience agency, warned there was a 50/50 chance of another eruption in the coming 24 hours, as the volcano vent continued to emit “steam and mud jetting”.

A New Zealand man, Geoff Hopkins, whose tour group was just leaving the island at the time of the eruption, said he helped pull critically injured survivors into a boat.

Hopkins, 50, who was given the tour as a birthday gift, said many of the survivors had run into the sea to escape the eruption.

“They were just so massively burnt,” he told the NZ Herald newspaper. “People were in shorts and T-shirts so there was a lot of exposed skin that was massively burnt.”

Australian Prime Minister Scott Morrison said three Australians were feared to be among the confirmed fatalities, with 13 among the injured.

“I fear there is worse news to come,” Morrison said.

Malaysia’s high commission in New Zealand said one Malaysian was among the dead.

Britain’s high commissioner to New Zealand, Laura Clark, confirmed on Twitter that two British women were among the injured in hospital.

Russell Clark, an intensive care paramedic with a helicopter team, said the early scenes were overwhelming.

“Everything was just blanketed in ash,” he told Reuters. “It was quite an overwhelming feeling.”

‘A DISASTER WAITING TO HAPPEN’

‘Whakaari’, as it is known in the Maori language, is New Zealand’s most-active cone volcano, built up by continuous volcanic activity over the past 150,000 years, according to GeoNet.

About 70% of the island is under the sea, making the volcanic structure the largest in New Zealand.

Ray Cas, a professor emeritus at Monash University, said the island “has been a disaster waiting to happen for many years”.

“Having visited it twice, I have always felt that it was too dangerous to allow the daily tour groups that visit the uninhabited island volcano by boat and helicopter,” Cas said in comments published by the Australian Science Media Centre.

GeoNet raised the alert level for the volcano in November because of an increase in volcanic activity. The volcano’s last fatal eruption was in 1914, when it killed 12 sulphur miners. There was a short-lived eruption in April 2016.

Yet, daily tours bring more than 10,000 visitors to the privately owned island every year.

Royal Caribbean confirmed late on Monday that several passengers on its 16-deck cruise liner, Ovation of the Seas, were on a day trip to the island but did not provide further information.

Janet Urey, 61, a nurse from Richmond, Virginia, said her son Matthew, 36, and his wife, Janet, 32, were cruise passengers injured in the eruption while on their honeymoon.

“The phone rang at midnight. Then I heard a voicemail come on. It was my son. He said, ‘Mom … this is not a joke. A volcano erupted while we were on the island. We’re at the hospital with severe burns.'”

Urey said she was frustrated by the lack of information from the cruise ship he was on and from authorities.

“I have not heard a word from the cruise people,” she said.

By In Cyprus
Previous articleMost property mortgages recorded in Nicosia and Limassol
Next articleAyia Napa: Supermarket employee robbed at knifepoint