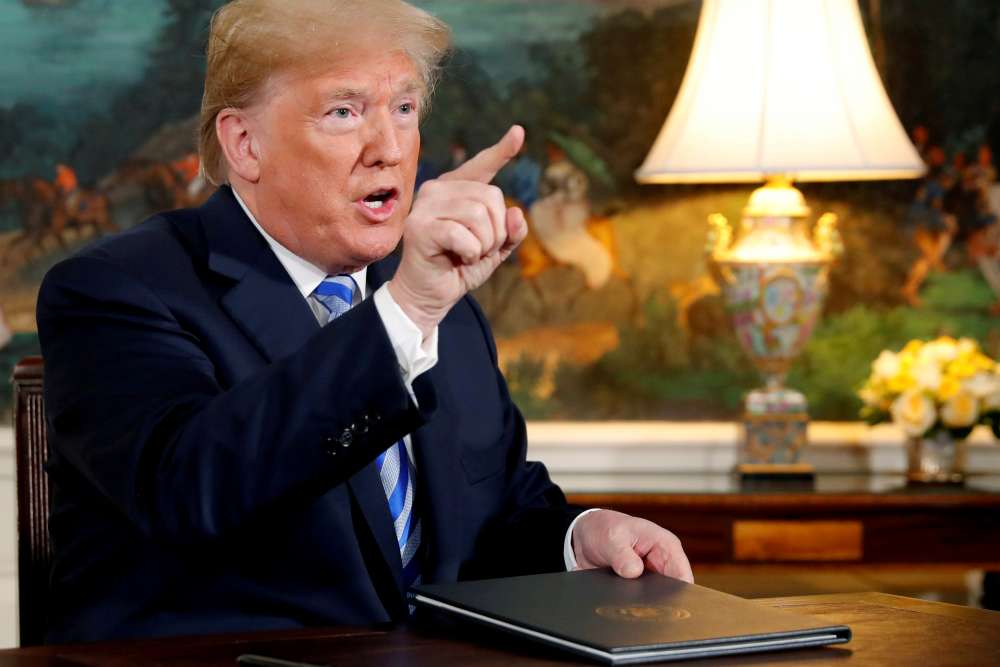 U.S. President Donald Trump pledged on Tuesday that firms doing business with Tehran would be barred from the United States as new U.S. sanctions against Iran took effect in spite of pleas from Washington’s allies.

Iran dismissed a last-minute offer from the Trump administration for talks, saying it could not negotiate while Washington had reneged on a 2015 deal to lift sanctions in return for curbs on Iran’s nuclear programme.

Trump decided this year to pull out of the agreement, ignoring pleas from the other world powers that had co-sponsored the deal, including Washington’s main European allies Britain, France and Germany, as well as Russia and China.

The European countries have promised to try to mitigate the impact of renewed U.S. sanctions to persuade Tehran to continue to abide by the deal’s terms.

But that has proven difficult: European companies have pulled out of Iran, arguing that they cannot risk the prospect of damage to their U.S. business.

White House national security adviser John Bolton said on Monday Iran’s only chance of escaping sanctions would be to take up an offer to negotiate with Trump for a tougher deal. ”

They could take up the president’s offer to negotiate with them, to give up their ballistic missile and nuclear weapons programs fully and really verifiably,” Bolton told Fox News.

“If the ayatollahs want to get out from under the squeeze, they should come and sit down. The pressure will not relent while the negotiations go on,” said Bolton, one of the administration’s main hawks on Iran.

Washington accepts that Iran has complied with the terms of the 2015 deal reached under Trump’s predecessor Barack Obama, but says the agreement is flawed because it is not strenuous enough. Iran says it will continue to abide by the deal for now, if other countries can help protect it from the economic impact of Washington’s decision to pull out.

In a speech hours before the sanctions were due to take effect, Iran’s President Hassan Rouhani rejected negotiations as long as Washington was no longer complying with the deal.

“If you stab someone with a knife and then you say you want talks, then the first thing you have to do is remove the knife,” Rouhani said in a speech broadcast live on state television.

“We are always in favour of diplomacy and talks…But talks need honesty,” Rouhani said. He dismissed the proposal for talks as a stunt to sow chaos in Iran and confuse American voters at home ahead of mid-term elections in November.

He said Washington was becoming isolated internationally and would come to regret imposing sanctions against the views of its allies and other world powers.

The nuclear deal is closely associated in Iran with Rouhani, a relative moderate who won two landslide elections on promises to open up the economy to the outside world.

European countries fear that by abandoning the deal, Washington risks undermining Rouhani and strengthening the hand of his more hardline opponents, who have long argued that the West would never allow Iran to prosper.

Britain, France, Germany and the EU as a bloc said in a joint statement on Monday: “We deeply regret the reimposition of sanctions by the U.S.”

Since the sanctions were initially lifted two years ago, Iranian oil exports have risen. But most Iranians have yet to see major economic improvement, and the prospect that Washington would re-impose sanctions helped drive a collapse in the value of Iran’s currency this year, raising the cost of imports.

There have been protests in Iran this year against rising prices, and the security forces have responded firmly. Perhaps seeking to head off more unrest, Iran announced steps this week to make it easier to access foreign currency, and said it was prosecuting an ex-central bank official for economic crimes.

Few American companies do much business in Iran, an enemy of the United States since its 1979 Islamic Revolution, so the impact of any sanctions depends on Washington’s ability to block European and Asian firms from doing business there.

Among large European companies that have suspended ambitious plans to invest in Iran in response to Trump’s sanctions are France’s oil major Total and its big carmakers PSA and Renault . “We have ceased our already restricted activities in Iran in accordance with the applicable sanctions”, said German car and truck manufacturer Daimler .