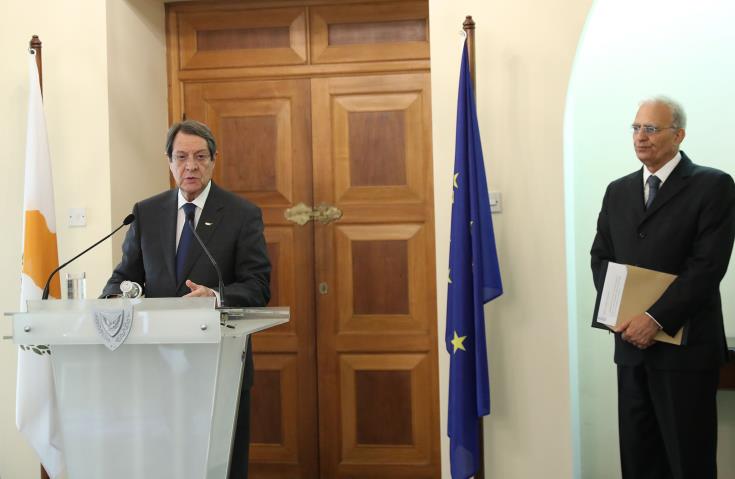 President Nicos Anastasiades on Thursday asked the new President of the Supreme Court, Stelios Nathanael, to actively contribute to efforts to enhance, modernise and accelerate justice in Cyprus, in cooperation with the competent Ministry.

Speaking during Nathanael’s swearing-in ceremony at the Presidential Palace, President Anastasiades also referred to a series of targeted measures and reforms, adopted by the government, and said that decisive steps have already been taken in order to modernise the justice system.

“We are not overlooking problems that continue to exist. I am, however, determined to pursue a justice system, matching the most advanced ones, through close cooperation with all competent and directly involved parties” the President said.

In his address, the president said that Nathanael’s new position is of key importance in defending constitutional order and the rule of law. “I have no doubt that you will work eagerly to safeguard the authority and credibility our country’s Supreme Court enjoys” he added.

He said moreover that reforming the justice system and the court structure, while respecting their independence, is at the core of government priorities.

Anastasiades listed, moreover, a number of reforms the government is pushing through to establish new courts, modernize court structures, solve their housing problems and promote e-Justice, among others. He thanked in conclusion the outgoing President of the Supreme Court, Myron Nikolatos, who served justice for more than 40 years.

Taking the floor, Nathanael thanked Anastasiades for his appointment and said that the Supreme Court “acknowledged first the problems in the administration of justice” and took a leading role in searching for solutions with the help of EU mechanisms.

Reforms have already started, the new Supreme Court President said and addressed the President of the Republic, saying that with his vision and with state support, significant changes in the court structure are already in the pipeline.

Nathanael said moreover that the Supreme Court hopes that the President’s vision in the area of justice will soon take shape, with the House of Representatives pushing through with reforms that will help accelerate the administration of justice and create the necessary control mechanisms. He thanked finally his predecessor, Myron Nikolatos, who presided over the Supreme Court for six years and promised to do his best while carrying out his tasks.