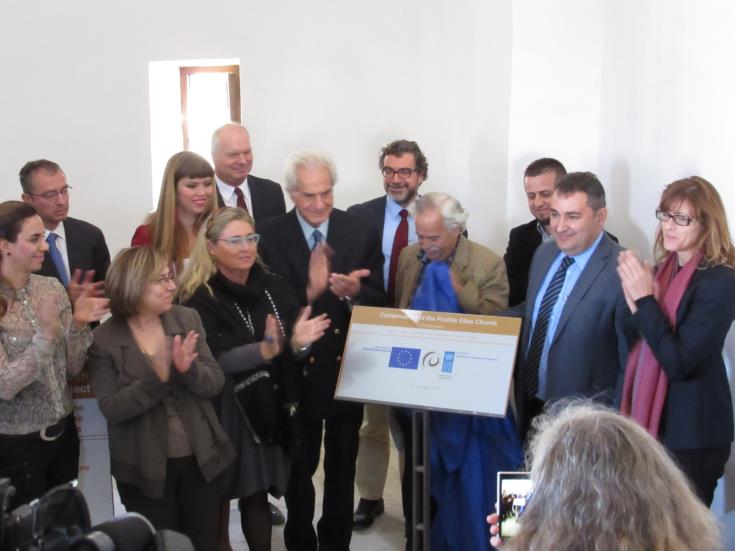 Greek Cypriot and Turkish Cypriot members of the Technical Committee for Cultural Heritage gathered in the Buffer Zone on Wednesday together with officials from the European Commission and the UNDP, to present the result of their ten-year effort in preserving the island’s cultural heritage.

The work is depicted in a new brochure that reflects the collective effort of all parties in the last decade.

This demonstrates the commitment of the Technical Committee to continue to build confidence, he remarked.

He also said the committee works with one voice and now knows how to tackle obstacles.

Furthermore, he said the committee’s efforts have spanned in all areas of the Cyprus and all types of projects were undertaken. Constantinides said the committee works based on a model and its ingredients are simple, common vision on cultural heritage in Cyprus for Cyprus and also commitment to achieving practical results.

On his part, Turkish Cypriot representative Ali Tuncay reminded that the Committee started its long journey ten years ago and learned to work together by creating an environment of mutual trust and cooperation following a long and cumbersome process. It has proved to be a platform for cooperation, he said, adding “the more we cooperate the more success stories will emerge from this island”.

He also praised the members of the Committee, the Advisory Board and UNDP, noting that it demonstrates that “if we really want, we can make things happen for the good of the island”.

However, he said that although in the last ten years they have faced a lot of difficulties and challenges, they are also aware that “we are racing against time and trying to save the monuments that cannot wait for the settlement of the Cyprus problem”.

Tuncay stressed that “the sustainable protection of the monuments on this island can be found only with the comprehensive solution of the Cyprus problem”.

Head of UNIT, SRSS.05 at the European Commission Kjartan Bjornsson,  said all the successes of the TC are documented in the brochure.

He further said that that its most important achievement was to have the two communities, working together, sharing a vision and attaining objectives.

This was not easy, he added, but now it is clear that the two communities can work together and they do and agree on sensitive issues.

The EU official said “we need to maintain efforts to make things work and provide an example for the communities”.
Bjornsson added that the committee and the EU will redouble efforts to rehabilitate so that the sites restored are fully used while it is also working on a virtual visit software for 2019 for every Cypriot to enjoy cultural heritage from School or from home.

Furthermore, he said a new contract will be signed in 2019 for the following years, four projects are ongoing and yet five more in the tendering process, ten designs are being developed and there is still a long list of sites to attend.

Tiziana Zennaro, UNDP Senior Programme Manager, Head of Office, said the UNDP in Cyprus is the implementer of the Technical Committee’s strategy and its work contributes to its success. She described the Technical Committee a “unique Cypriot experience envisioned by the leaders of the two communities ten years ago.”

She said that in Cyprus, in the past years these projects brought together hundreds of Cypriots as well as students from both communities, adding that this is a “tangible example of the important role cultural heritage can play in reinforcing a shared identity and contributing to peace and confidence building measures.

She said she hoped the publication will be of help in making the voice of the TC on Cultural Heritage heard in Cyprus and internationally, so that it gets the attention and the investments it deserves and serves as an example in many other similar context.

Regarding the publication, she said while the 2015 edition had only 20 pages, the 2018 has 80 and includes photos and stories from 31 heritage sites island wide, including Orthodox, Maronite and Armenian churches, mosques and minarets, fortifications, hammams, aqueducts and watermills that were conserved, structurally supported, physically protected or restored with the support of the EU.

She also said that approximately €20 m were invested for the preservation of the island’s cultural heritage, €14.7 m of EU funding, €2.5m from the Church of Cyprus, €2.5 m from the EVKAF administration and €150,000 from other donors.