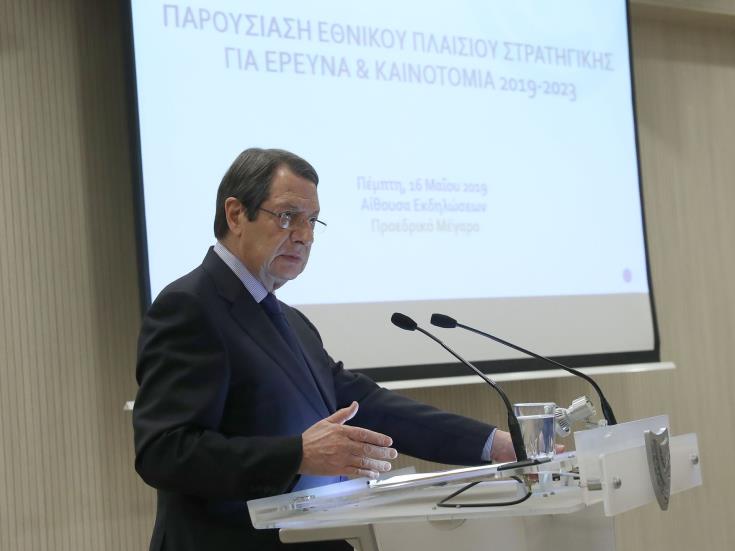 Cyprus’ 2019-2023 National Strategic Framework on Research and Innovation was unveiled on Thursday during an event at the Presidential Palace, in the presence of President Nicos Anastasiades, who said that the Government aims to more than double expenditure on research and development and increase private contribution to it.

Referring to the creation of a comprehensive development system in the field of research and innovation, the President spoke of one of the Government’s most important reforms.

He noted that having adopted a proposal dubbed “Innovate Cyprus” which was prepared by the National Committee on Research, Innovation and Technological Development, the Government proceeds with a series of reforms to realize its goal to create new productive sectors of development, with research, scientific excellence, innovation, technological development and entrepreneurship at its core.

Among other things, President Anastasiades referred to the Cabinet’s decision to adopt a new system of governance in research and innovation, by establishing a National Council of Research and Innovation and reiterated the Government’s intention to establish a Deputy Ministry for research, innovation and digital governance. He added that the relevant bill will be soon submitted before the Cabinet and then to the House of Representatives.

The President said moreover that the “startup visa” programme has been revised and renewed so that Cyprus can attract innovative enterprises and added that the Government promotes the support of private initiative and investment that targets the development and financing of startup and innovative entrepreneurship.

Anastasiades announced that three new schemes will be announced by the Research and Innovation Foundation in the next days to finance the establishment of new startups as well as of existing ones and support companies that would like to expand their activities and introduce new innovative products and services.

He also noted that the Government will provide €60 mn to co – fund the establishment of four new research centers of excellence.

He added that following the revision of the Cyprus Investment Program, any foreign investor wishing to do business in Cyprus should, among other things, donate €75,000 to the Research and Innovation Foundation.

“I would like to reassure you that the steps previously mentioned are only the beginning of our effort to make use of the research and innovation ecosystem”, said President Anastasiades.

“A series of announcements and measures will follow”, he added, “that will proceed rapidly in order not only to achieve the desired and optimistic goal to more than double expenditure on research and development, but also to increase private contribution to spending”, he pointed out.

The Council’s vision, he pointed out, “is for Cyprus to become a dynamic and competitive economy with research, scientific excellence, innovation, technological development and entrepreneurship providing the stimulus and a regional center in these key sectors”.