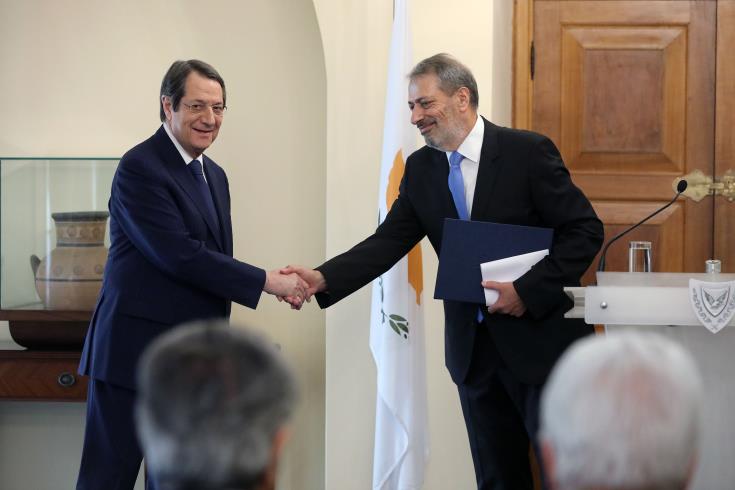 Georgios Savvides, the new Minister of Justice and Public Order, vowed to seek consensus among stake holders to complete reform of the justice system.

Savvides was sworn in today, succeeding Ionas Nicolaou who resigned in the wake of a public outcry over revelations that the seven victims of a self-confessed serial killer had earlier been reported missing.

Speaking during the swearing in ceremony at the Presidential Palace, President Anastasiades said he has no doubt that Savvides will respond to “the admittedly difficult task and will prove worthy of the expectations associated with his appointment.”

Anastasiades said that Savvides’ 35-year work experience, his excellent qualifications, his honesty and integrity provide the guarantees of an equally successful course in a Ministry which aims at the constant improvement of the justice system, security and protection of the citizens’ rights and the reform in the Police Force and Fire Service as well as the Prison Department.

The President also said he has no doubt that in performing his duties Savvides will be strict in observing the principles of transparency, good management, political ethos and meritocracy at all levels of the departments under his Ministry.

Anastasiades praised the work of the outgoing minister in promoting reforms in the justice system.

On his part, Savvides said he assumes the new post with full knowledge of the responsibilities of his duty, while he praised the work of his predecessor.

“I am aware that the problems my Ministry has to handle are difficult, complex and highly important especially those concerning citizens safety,” he said, noting that the biggest challenge concerns the completion of the reform in the justice system and the promotion of the other reform action initiated by Nicolaou.

He added that he will work to obtain the trust and support of the political parties, the judiciary, the Attorney-General, the Cyprus Bar Association and other stake holders seeking the broadest possible consensus necessary to promote the needed laws and achieve the necessary solutions.

“I am fully aware that Ministers come and go. What is important for me is to contribute in a way that you could depart with a clear consciousness that you did your duty, leaving behind a significant work and a good image,” he concluded.