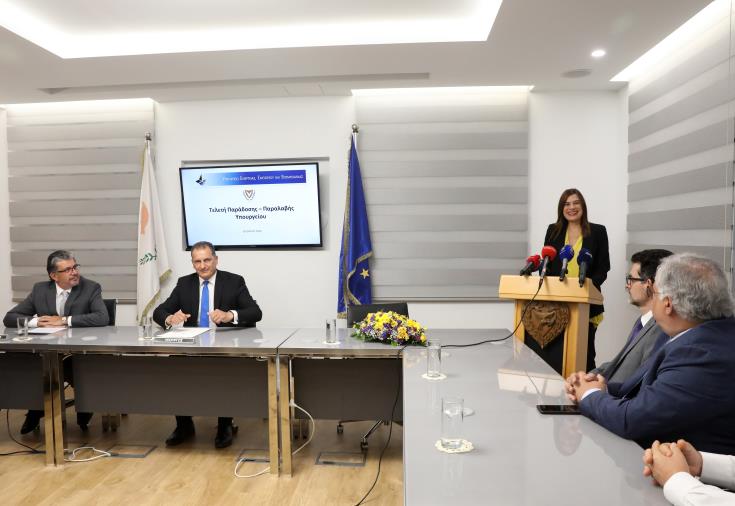 New Minister of Energy, Commerce and Industry of Cyprus Natasa Pilides assumed duties on Friday, with the promise to work hard to continue the Ministry’s successful course.

“I promise to work even harder to continue the successful course of the Ministry and to implement in the best possible way the goals of each Service, for the benefit of the Cypriot consumer, the Cypriot businessman, the Cypriot industrialist, the Cypriot citizen”, she said, speaking at the handover ceremony.

As she pointed out, from hydrocarbons and energy to trade, industry and the Registrar of Companies, the challenges of the Ministry are many and the goals are multidimensional.

“However, I hope that with the right planning, collective effort and hard work, our Ministry will become even more established as the first and main point of contact for energy, trade and industry, giving Cypriot businesses the resources they need to face future challenges successfully,” she said.

She also praised the work done in the Ministry, under the leadership of Yiorgos Lakkotrypis, over the last seven years and thanked him not only for the important legacy he leaves behind, but also for the excellent cooperation they had all these years, first from her position as Director of the Cyprus Investment Promotion Agency and, later, as Deputy Minister of Shipping.

From his part, Lakkotrypis said that by leaving the Ministry, he is leaving behind a large part of himself, thanking the staff that stood by his side in difficult times, while as he said, they also celebrated important successes together.

At the same time he said he was sure that under Pilides’ leadership, the Ministry will further strengthen its role.

Lakkotrypis also thanked President Anastasiades who entrusted him with this key post for almost seven and a half years and expressed hope that he was worthy of the President`s trust.

Addressing the new Minister, he said that having worked with her as colleagues in the Cabinet for the last two and a half years, but also from her previous position as head of Invest Cyprus, he is well aware that he is handing over the crucial portfolio of the Ministry to very experienced and capable hands.

By Josephine Koumettou
Previous articleTurkish court paves way to turn Hagia Sophia into a mosque
Next articleThree new Covid-19 cases, one a football player who arrived from Serbia