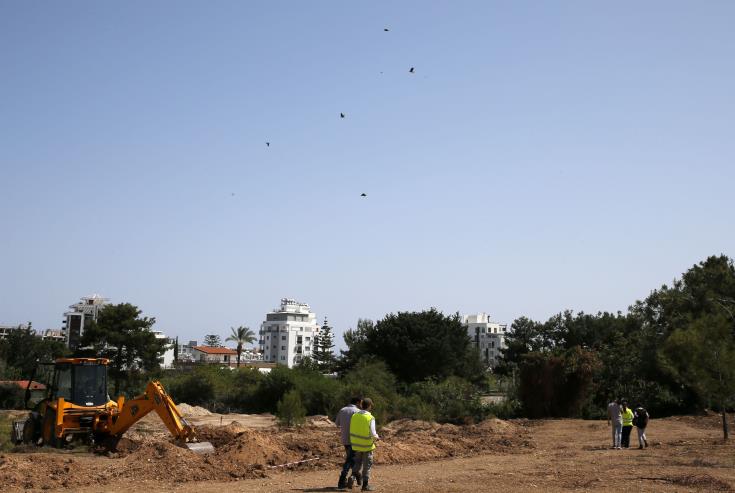 There are many difficulties in excavating the area in the northern Turkish occupied areas of Cyprus, where missing persons from Ashia village are believed to have been buried, the Greek Cypriot member to the Committee on Missing Persons (CMP) Nestoras Nestoros has told the Cyprus News Agency in an interview. He assured however that despite these difficulties, the Committee will do its utmost to excavate the area.

The landfill was closed between 2009-2012 by Portuguese experts, a project that was funded by the EU which did not know at the time the details of this case relating to the Ashia missing persons.

Nestoros told CNA that the dumping site was restored and made clear that no trees were planted in the area were rubbish was dumped in the past. According to Nestoros, trees are now in place only around a cell that was created to close the space of the dumping.

‘’All necessary procedures and studies are carried out to determine whether the site can be excavated. There are many difficulties and we need to take them into consideration in order to see if we could overcome them. We will do everything possible without any deviations,’’ he said.

Nestoros told CNA that this is expected to be a costly excavation for which additional funding will be sought from the EU.
‘’We are in constant contact with the Portuguese experts who carried out the project and we have been given technical data we had asked for,” he said.

More generally, with regard to the issue of CMP funding, Nestoros said it is indeed an issue of great concern, because the Committee’s smooth operation depends on it. CMP receives 2.6 million funding each year from the EU, with its annual budget being 3.5 million.

“Therefore, we are always concerned about securing the remaining amount, which is necessary. Regarding the slow pace in identification process of human remains, this is mainly due to the findings of the excavations, where fragments of bones are mainly located and whose anthropological analysis is time-consuming if we want to carry out identifications in accordance with the established scientific protocols,” the CMP Greek Cypriot member told the CNA.

Replying to a question about the excavations in military areas in the occupied Cyprus and whether there will be new excavations in 2018, Nestoros said that since November 2015 there has been an agreed process which provides for the excavation of 30 possible areas, ten per year, to cover 2016-2018.

In addition, he mentioned, during the course of the research process, this list has been updated with new information.

“At this stage, excavations at two sites in military areas at the occupied villages of Voni and Dikomo are in progress since 2017, while in 2018 there are 20 sites to be excavated and one more for which information has been obtained since the initial list was drafted,’’ he said.

Regarding the limited information received by the CMP on possible burial sites, Nestoros said that this is an issue that worries the Committee.

“It is obvious that the lack of information makes our work harder, since time is running out to the detriment of the objectives of the program. It appears that the information on burial sites, which was known to people, was shared with the CMP and was exploited during the early years of the program. In the course of time, information is still coming in from people who either heard or saw something and wanted to assist the work of the CMP but this information and testimonies do not relate to mass burials which is what we are looking for. Yes, fear of sharing information by some people on burial sites was there, in some cases people who have been involved in paramilitary groups were afraid to share information,” Nestoras told CNA.

He noted, however, that the most important information on burial sites is held by the Turkish army, who reportedly have organized mass burials of the dead who were collected from the battlefields during the 1974 Turkish invasion.

‘’These sites of mass burials have not yet been identified, except in the case of burial in the occupied Trachonas village, where in 2015 the remains of 36 people were identified,’’ Nestoras said.

He said that the cooperation of the Turkish army is important and the CMP needs this cooperation and is asking for it in order to deal to the maximum extent with the issue of missing persons.

On the issue of archives, mostly of the Turkish army, which can provide valuable information on the missing, Nestoros told CNA that in 2017 a three-member Archives Research Team was established, which undertook the task of searching for and recording relevant information from international archives. The three-member team comprises the Archives Research Coordinator, a Greek Cypriot researcher and a Turkish Cypriot researcher.

“My office also appointed a focal person to study police records and other government agencies’ records. At the same time a researcher was appointed by the Cyprus Defence Minister to search military archives in Cyprus,” Nestoros said.

Nestoros recalled that there was a commitment on behalf of Turkey and the Turkish Cypriot side to appoint a group to collect archive material that would be sent to the CMP after it had been declassified.

Moreover he said that the requests by CMP for investigation into the archives of the United Nations, in both Cyprus and New York, the International Committee of the Red Cross (ICRC-General Archive and Central Tracing Agency), the British Bases archives and other archives in the UK have been approved while positive answers were given also by Austria, Finland, Denmark, Canada and Sweden.

Nestoros was invited to say whether he believes that mistakes of the past in handling the issue of the missing persons have cost us, in particular with regard to the failure to seek permission to open archives or request assistance from other authorities or organisations such as the Red Cross.

“It goes without saying that any mistake has a cost. Regarding the archives I can say that there has never been a concerted effort to in the past by the three CMP members to this end, even though the thought was there. Ensuring a positive and effective assistance from countries involved requires intensive efforts. Also CMP members will have to develop a personal working relationship with relevant state or military authorities. The UN could have granted access to their archives or share information or both, much earlier,’’ he noted.

In order to locate burial sites the CMP scientists, as Nestoros explained, use various methods or a combination of methods and means. He said that in order to assist the search for burial sites and evaluating fresh information, his Office has recruited a Research Coordinator and three young researchers.

“In addition, the Greek Cypriot researchers are trained in analysis of testimonies, in specialized ways to approach witnesses, in methods to help people recall their experiences and in false detection techniques etc. Cooperation was also strengthened with the Office for Missing Persons at the Cyprus Intelligence Service and the Land Registry Department, while our staff has been trained by the Cyprus University of Technology in Geographic Information Systems,” he said.

With regard to the technical means used such as special radars and metal detectors, Nestoros explained that these are supporting the work of the scientists. He also noted that there is a daily and open contact with the office of the Turkish Cypriot member to the CMP.

Nestoros noted that the issue of missing persons should be resolved before a solution is reached to the Cyprus problem so that the right message could be sent to society. “It`s an important issue, a humanitarian issue which can give momentum,” he said.

Cyprus has been divided since 1974 when Turkish troops invaded and occupied its northern third. Hundreds of Greek Cypriots went missing during the 1974 Turkish invasion of Cyprus, most of them combatants but also women, children and elderly people. During the same period and in the early 1960 when intercommunal fighting broke out Turkish Cypriots went missing too.