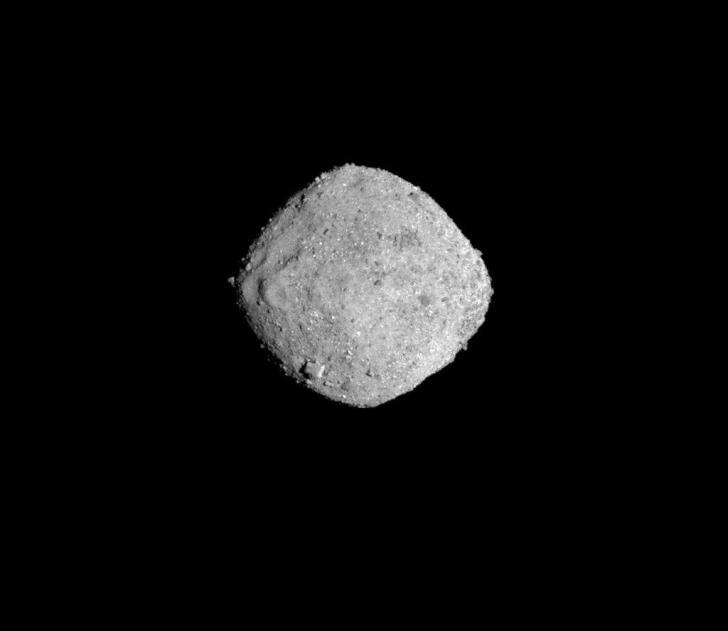 NASA’s deep space explorer Osiris-Rex flew on Monday to within a dozen miles of its destination, a skyscraper-sized asteroid believed to hold organic compounds fundamental to life as well as the potential to collide with Earth in about 150 years.

Launched in September 2016, Osiris-Rex embarked on NASA’s unprecedented seven-year mission to conduct a close-up survey of the asteroid Bennu, collect a sample from its surface and return that material to Earth for study.

Bennu, a rocky mass roughly a third of a mile wide and shaped like a giant acorn, orbits the sun at roughly the same distance as Earth and is thought to be rich in carbon-based organic molecules dating back to the earliest days of the solar system. Water, another vital component to the evolution of life, may also be trapped in the asteroid’s minerals.

Scientists believe that asteroids and comets crashing into early Earth delivered organic compounds and water that seeded the planet for life, and atomic-level analysis of samples from Bennu could help prove that theory.

But there is another, more existential reason to study Bennu.

Scientists estimate there is a one-in-2,700 chance of the asteroid slamming catastrophically into Earth 166 years from now. That probability ranks Bennu No. 2 on NASA’s catalog of 72 near-Earth objects potentially capable of hitting the planet.

Osiris-Rex will help scientists understand how heat radiated from the sun is gently steering Bennu on an increasingly menacing course through the solar system. That solar energy is believed to be nudging the asteroid ever closer toward Earth’s path each time the asteroid makes its closest approach to our planet every six years.

“By the time we collect the sample in 2020 we will have a much better idea of the probability that Bennu would impact Earth in the next 150 years,” mission spokeswoman Erin Morton said. Scientists have estimated that in 2135 Bennu could pass closer to Earth than the moon, which orbits at a distance of about 250,000 miles, and possibly come closer still some time between 2175 and 2195.

Osiris-Rex reached the “preliminary survey” phase of its mission on Monday, soaring to within 12 miles of the asteroid. The spacecraft will pass just 1.2 miles from Bennu in late December, where it will enter the object’s gravitational pull.

From that stage, the spacecraft will begin gradually tightening its orbit around the asteroid, spiraling to within just 6 feet of its surface. Osiris-Rex will then extend its robot arm to snatch a sample of Bennu’s terrain in a “touch-and-go” maneuver set for July 2020.

Osiris-Rex will later fly back to Earth, jettisoning a capsule bearing the asteroid specimen for a parachute descent in the Utah desert in September 2023.

NASA is developing a strategy for deflecting Bennu, or any other asteroid found to be on a collision course with Earth, by use of a special spacecraft to slam into the object hard enough to nudge it onto a safer path, said Lindley Johnson, a planetary defense officer with NASA’s Science Mission Directorate.

“But this is all dependent on the outcome of a very close approach that Bennu has with Earth in September 2135,” Johnson said. “We’ll just need to wait and see. Rather, our great-great-grandchildren will need to see.”