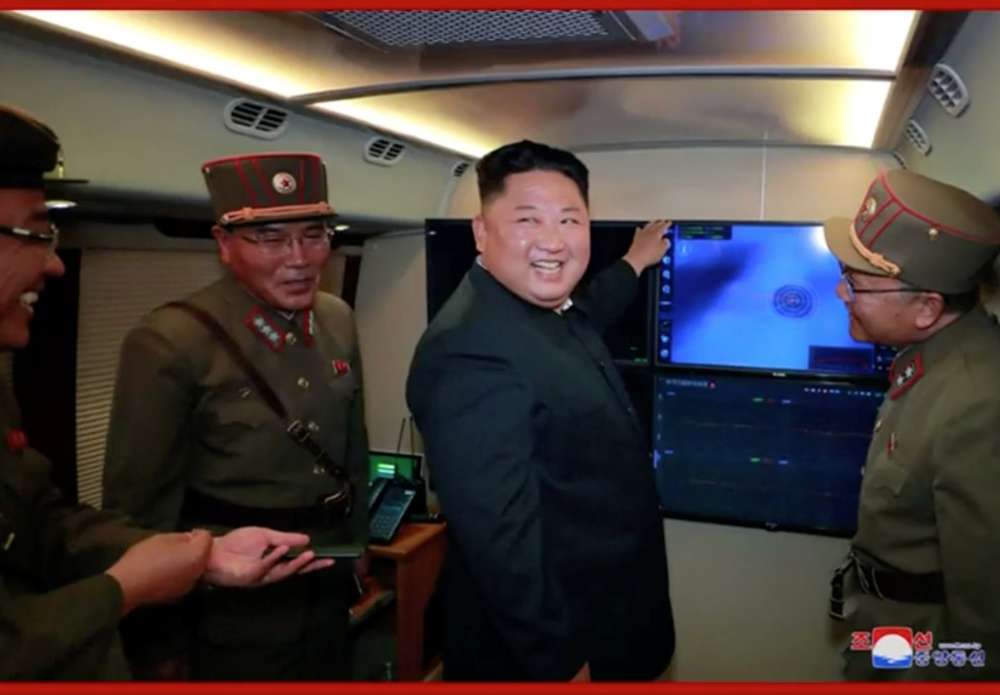 North Korea fired what may have been a submarine-launched ballistic missile from off its east coast on Wednesday, a day after it announced the resumption of talks with the United States on ending its nuclear programme.

If confirmed, it would be the most provocative test by North Korea since it started the talks with the United States in 2018. Analysts said it was likely a reminder by Pyongyang of the weapons capability it had been aggressively developing as it gears up for the new round of talks.

A State Department spokeswoman called on Pyongyang to “refrain from provocations” and remain committed to the nuclear negotiations.

South Korea’s military said it had detected the launch of one missile that flew 450 km (280 miles) and reached an altitude of 910 km (565 miles). It was likely a Pukguksong-class weapon, as the North’s earlier submarine-launched ballistic missiles (SLBMs) under development were known.

South Korean Defence Minister Jeong Kyeong-doo told a parliamentary committee that the Pukguksong, or Pole Star in Korean, has a range of about 1,300 km (910 miles) and that the missile’s trajectory may have been raised to reduce the distance it travelled.

CNN, citing a U.S. official, said that the missile was launched from an underwater platform, which North Korea has previously done at the early stage of the SLBM programme in 2015.

North Korea rejects U.N. Security Council resolutions that ban Pyongyang from using ballistic missile technology, saying they are an infringement of its right to self-defence.

Talks aimed at dismantling North Korea’s nuclear and missile programmes have been stalled since a second summit between U.S. President Donald Trump and North Korean leader Kim Jong Un in Vietnam in February ended without a deal.

The two leaders then met at the Demilitarized Zone border between the two Koreas in June and pledged to reopen working-level talks within weeks.

Japan’s Chief Cabinet Secretary Yoshihide Suga said it appeared that one missile was launched and had split in two and then fallen into the sea. The Japanese government had said earlier it appeared North Korea had launched two missiles, one of which fell inside Japan’s Exclusive Economic Zone (EEZ).

South Korea’s Jeong, asked about Japan’s earlier assessment of two missiles, said the missile might have had at least two stages that separated in flight.

North Korea had been developing SLBM technology before it suspended long-range missile and nuclear tests and began talks with the United States that led to the first summit between Kim and Trump in Singapore in June 2018.

State news agency KCNA released photos and a report of leader Kim Jong Un in July inspecting a large, newly built submarine, seen as a potential signal that Pyongyang was continuing with its development of an SLBM programme.

The latest missile launch was the ninth since Trump and Kim met in June, but the others have been of short-range land-based missiles.

David Wright, missile expert with the Union of Concerned Scientists, put the range of the missile tested on Wednesday at about 1,900 km (1,200 miles) at standard trajectory.

Hours before Wednesday’s launch, North Korean Vice Foreign Minister Choe Son Hui said in a statement the working-level talks with the United States would be held on Saturday – a development that could potentially break what had been months of stalemate.

North Korea’s previous missile launch was on Sept. 10, also hours after Choe had expressed Pyongyang’s willingness for talks with the United States.

Leif-Eric Easley, a professor at Ewha University in Seoul, said: “North Korea tends to raise the stakes before negotiations in an effort to win unearned concessions.”

Trump has played down North Korea’s recent series of short-range launches, saying in September the United States and North Korea “didn’t have an agreement on short-range missiles” and that many countries test such weapons.

Vipin Narang, a nuclear expert at the Massachusetts Institute of Technology, said the timing of the latest launch enhances leverage for the North and also signals Pyongyang is in for the long haul in its talks with Washington.

“The risk is that testing such a system causes the U.S. to walk away before this weekend, but Kim probably bet that the U.S. is so invested in the talks taking place and making progress … that the U.S. won’t walk away.”