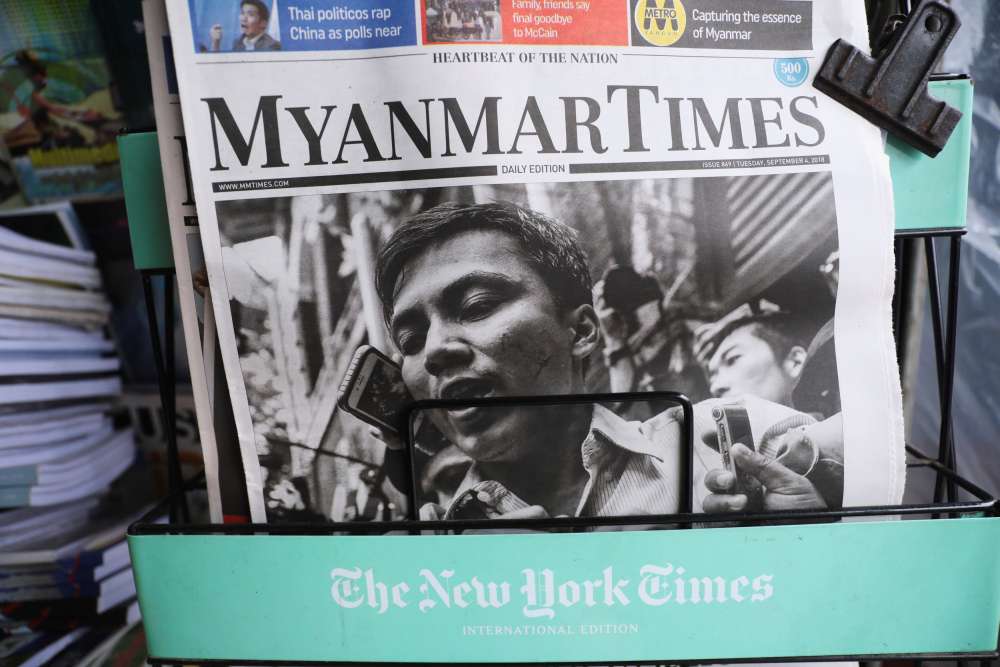 Seventy-six Myanmar civil society groups called on Tuesday for the release of two jailed Reuters reporters, denouncing their conviction as unfair and an assault on the right to freedom of information.

A court found the two journalists guilty on Monday of breaching a law on state secrets and jailed them for seven years in a landmark case seen as a test of progress towards democracy in Myanmar, which was ruled by a military junta until 2011.

Wa Lone, 32, and Kyaw Soe Oo, 28, were investigating the killing of villagers from the Rohingya Muslim minority by security forces and civilians when they were arrested in December. They had pleaded not guilty.

“The entire trial process was neither free nor fair and was completely manipulated,” the groups, including youth, educational and peace organisations, said in a joint statement posted on Twitter.

The conviction of the two reporters drew condemnation from the United Nations, many Western governments including the United States, Britain and France, and international organisations.

Several diplomats said it raised questions about Myanmar’s transition towards democracy after nearly 50 years of harsh military rule, and about the commitment to human rights of the government, led by Nobel laureate Aung San Suu Kyi.

“We take this as a crackdown on the right of access to information and media freedom, and an oppressive gesture on all concerned people of Myanmar who are aspiring and building for a society characterised by rule of law, accountability, freedom and justice,” the civil society groups said in an English-language statement.

The reporters had told the court two police officials handed them papers at a restaurant in the city of Yangon moments before other officers arrested them on Dec. 12.

One police witness testified the restaurant meeting was a set-up to entrap the journalists to block or punish them for their reporting of a mass killing of Rohingya Muslims in Rakhine State. The judge said on Monday that testimony had not been corroborated by any other witnesses.

A police officer also told the court that he burned notes he made at the time of the reporters’ arrest, but didn’t explain why. Several prosecution witnesses contradicted the police account of where the arrests took place. A police major conceded the “secret” information allegedly found on the reporters wasn’t actually a secret.

Myanmar government spokesman Zaw Htay could not be reached for comment about the verdict. He has mostly declined to comment throughout the proceedings, saying the courts were independent and the case would be conducted according to the law.

The conviction of the reporters comes amid mounting pressure on the government over the crackdown on the Rohingya in Rakhine State in west Myanmar. The crackdown was sparked by attacks by Rohingya insurgents on security forces in August 2017.

A U.N mandated fact-finding mission said last week that Myanmar’s military carried out mass killings and gang rapes of Rohingya with “genocidal intent” and called for top generals to be prosecuted. Myanmar rejected the findings.

More than 700,000 stateless Rohingya Muslims have fled into Bangladesh since the crackdown was launched, according to U.N. agencies.

The reporters were arrested on Dec. 12 while investigating the killing of 10 Rohingya Muslim men in Inn Din, a village in Rakhine State. The 10 men were shot and hacked to death by soldiers and civilians, and dumped in a shallow grave.

Myanmar has denied allegations of atrocities made by refugees against its security forces, saying they conducted a legitimate counter-insurgency operation against Muslim militants.

But the military acknowledged the killing of the 10 Rohingya at Inn Din after arresting the Reuters reporters. In April, the army announced that seven soldiers had been sentenced to “10 years in prison with hard labour in a remote area” for participating in the killings.