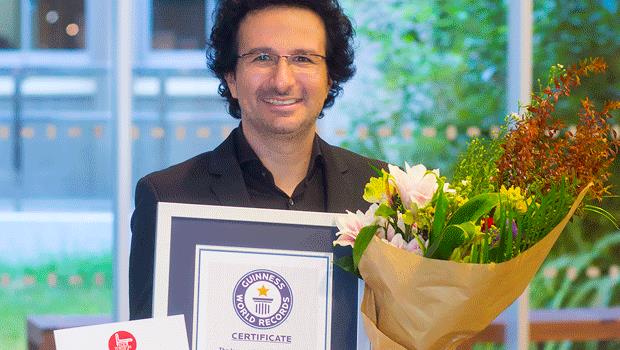 Marios Elia from Paphos had made it into the Guinness Book of Records after successfully composing music for the largest ensemble orchestra of Matryomins in the world.

The Cypriot composer who lives and works abroad has had a lot of success and distinctions over the past 15 years.

The new target was to compose music for the largest ensembles orchestra of Theremin (Matryomins) in the world.

He broke the record with “Matryoshka” the premiere of which took place at the Design and Creative KIITO in Kobe, Japan on September 14  featuring 289 performers using Theremin instruments.

The previous record was set in 2013 (273 performers using Theremin instruments).

Elia dedicated his composition to the 100 year anniversary of the invention by Russian inventor Leon Theremin of the theremin,  one of the first electronic musical instruments and the first to be mass-produced.

He also devised the interlace technique for improving the quality of a video signal, still widely used in video and television technology.

His listening device, “The Thing”, hung for seven years in plain view in the United States Ambassador’s Moscow office and enabled Soviet agents to eavesdrop on secret conversations.