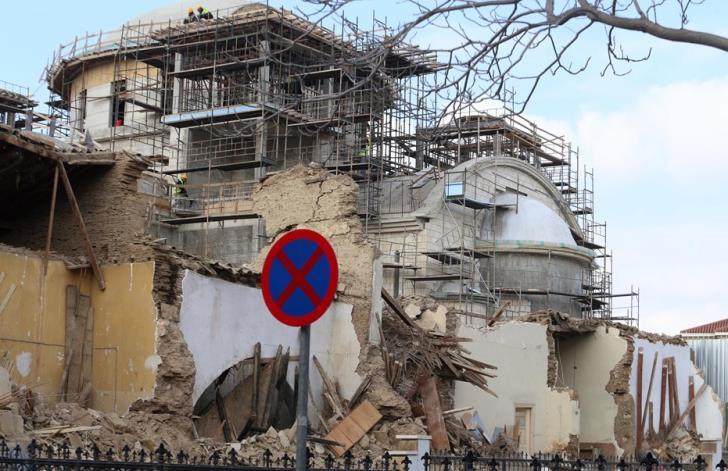 The Nicosia Municipal Council has voted on Saturday to allow Archbishop Chrysostomos to restore three listed buildings in the Nicosia old city which he had partly demolished on Monday to the astonishment of authorities and the general public.

Philenews reports that the agreement approved today stipulates that a timeframe be set for the restoration of the buildings which will be subject to fines if violated and that the building works are estimated to last one and a half to two months.

In addition, Archbishop Chrysostomos said that he is willing to be bound by a guarantor letter worth €400,000-€500,000 that the municipality will be entitled to should he not make good on the commitment to restore the listed property.

The Archbishop had sent a letter on Thursday to Nicosia mayor Constantinos Yiorkadjis saying that the demolition went ahead because last Saturday’s bad weather damaged one of the houses, deeming them a safety hazard, but critics have said that he gave the order because the buildings were blocking the view to the under-construction ostentatious new cathedral the Archbishopric is building there.

The Nicosia Municipality has clarified that other than the fines in the event of delays, it is also prepared to revoke the cathedral building permits and to request a court order to stop building works should the restoration not materialise.

Monday’s demolition of the listed buildings on Isokratous Street has sparked widespread outrage and prompted an online petition put together by local activists, lawyers and civil engineers to demand that the Archbishopric be brought to justice and that the government freezes building works of the new church until the demolished buildings are restored.

“We need to cherish the old Cypriot buildings and heritage, not destroy them,” said one supporter of the petition, which counts 1,400 signatures so far, while a few others noted that “no one is above the law.”

Earlier this week, Attorney General George Savvides said that the demolition of listed buildings is a criminal offence and that their restoration should take place the soonest possible.

Speaking to local media on Thursday, local historian Marios Epaminondas explained that according to written sources, one of the demolished buildings found on 4 Isokratous Street was bequeathed to the Pancyprian Gymnasium – Cyprus’ oldest secondary school located opposite the Archbishopric in Nicosia – by teacher Charalambos Maratheftis and his wife Ifigenia in the 1920’s.

In his will in 1927, Maratheftis bequeathed his and his wife’s – who had died earlier – property in the Ayios Antonios area in Nicosia, including 4 Isokratous Street, to the local people to be used for philanthropic and educational purposes, namely as a kindergarten or as a workshop to employ the ‘needy’ and ‘poor Greek Nicosia inhabitants’.

To ensure his and his wife’s wishes were executed after his death, Maratheftis had appointed as executors of the will the Archbishop of Cyprus, the headmaster of the Pancyprian Gymnasium “and the headmasters of the Nicosia urban Greek boys schools.”

By Josephine Koumettou
Previous articleWhere to get a rapid test on Sunday 7 February
Next articleOne death, 132 new Covid cases on Saturday