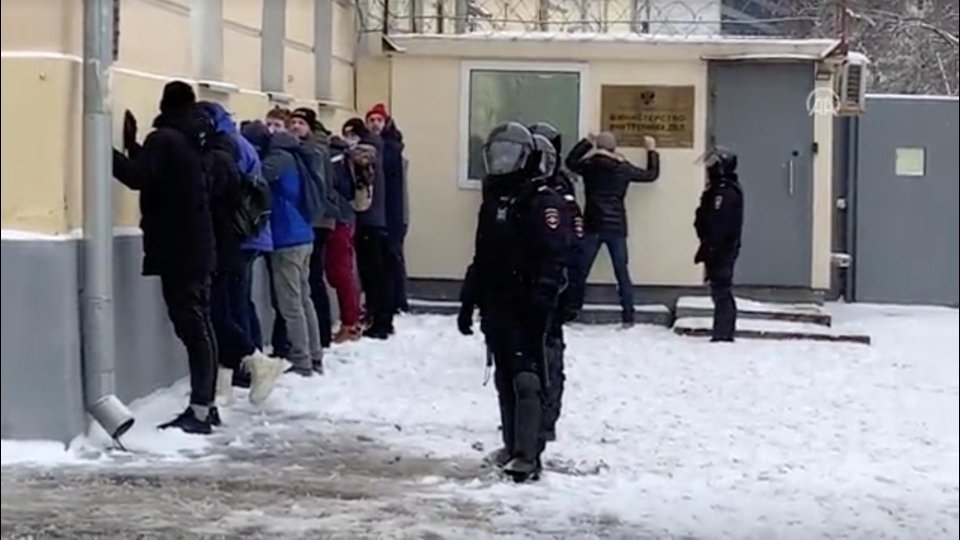 Police in the Russian capital arrested some protesters who gathered in central Moscow on Sunday, Jan. 31, against the detention of opposition politician Alexey Navalny.

Since last week, when tens of thousands of demonstrators gathered in Russia to protest Navalny’s detention and demanded his immediate release, protests have been ongoing.

A number of Navalny supporters were detained during police interventions.

Russian police raided the apartment and the office of the jailed Russian opposition figure for alleged violation of epidemiological or sanitary standards.

The raid occurred after several countries demanded Russia release Navalny while nationwide demonstrations were held to protest his detention.

Navalny, 44, who received treatment in Germany for poisoning, was arrested in Moscow after he returned on Jan. 17. Authorities said he violated probation terms from a suspended sentence on a 2014 money laundering offense. Navalny says the charge is “politically motivated.”

Less than 25 hours after his return, Moscow’s Khimki Court ruled that Navalny would remain in custody on 30-day pre-trial detention.

He is now behind bars in Moscow’s infamous jail Matrosskaya Tishina.

By gavriella
Previous articleRapid tests for people returning to work; where to get rapid tests 1- 7 February
Next articleMinister to reassess situation after tender for Cyprus-Greece ferry link fails to attract proposals