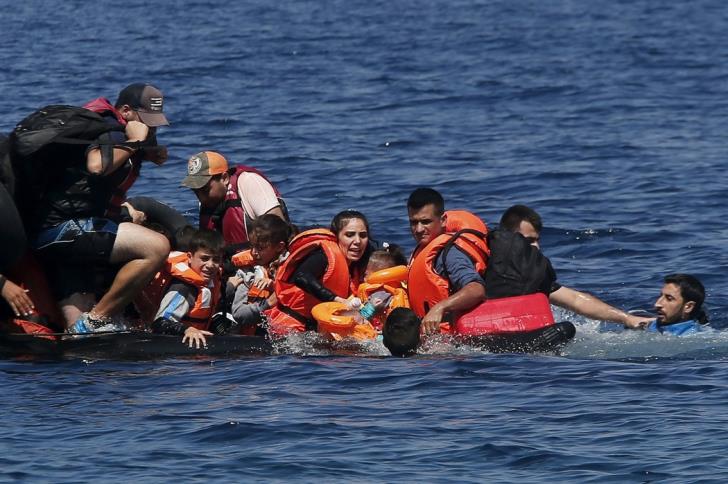 Wearing their wet clothes, 47 refugees were crossing the buffer zone, following the only advice they got from their trafficker: “As soon as you come ashore, walk. Get into a road. You will find someone.”

The trafficker then left to escape authorities.

UNFICYP found the refugees after 30 minutes and took them to the nearest police station. The next day they transferred them to the refugee camp in Kokkinotrimithia.

“Syria will never be the same. Death has become routine. The night comes and you don’t know whether you’ll be alive in the morning. Whether your house will turn into shambles and bury you underneath it,” said a young woman from Aleppo.

Her journey to Cyprus began under the worst conditions along with 46 other people who she shared a boat with in November.

She says, that the trafficker led them close to the shore and ordered them to jump. Not having any other choice, they complied.

“Ι hesitated. I was six months pregnant. I was scared, tired and exhausted by the journey and anxiety,” she said.

The trafficker had no time to lose. He pushed her in the sea.

“The water was so cold,” she told people of the UNCHR. The only things she brought from her country were a few clothes and the Quran. “I carry it with me as a keepsake.”

For refugees, the journey from Syria to Cyprus can cost them their lives. However, many are ready to risk it. The war in Syria has been going on for almost eight years now. The hope that some time they will be able to go home and live like they used to has vanished. So they leave without having anything to lose. Maybe they will win the bet and find somewhere safe to live and a second chance in life.

Between 10,000-30,000 people without documents lived in Cyprus in 2018, the World Population Review estimated.

Press officer of UNCHR Cyprus Aimilia Strovolidou told Phileleftheros that about 9,100 refuges have applied for asylum in Cyprus, with their applications still pending.

The review process can take up to five years, she said. “There are asylum applicants who live among us, with no money, without work, without having the basic things they need to live. They are fully dependent on us. The live in abysmal conditions, below the poverty line. Some sleep in parks, some live in rooms full of people.The social policy of the government is inadequate.”

Strovoliotou commented on the new UN migration pact which as she said “regulates and ensures the normal and safe flowing of migration and responds to illegal migration and human trafficking.”

Director General of International Organisation for Migration (IOM) said that in 2018, 3,400 lost their lives. “In 2018, there were 258 million migrants in the world. Of them 40 million are refugees, while 18.8 million each year are forced to leave their homes because of climate change. 3,400 of them died while trying to their destination either via land or via sea,” Vitorino said.

By In Cyprus
Previous articleRussia launches investigation into BBC as dispute with Britain escalates
Next articleCyprus trade deficit declines to €3.05 billion