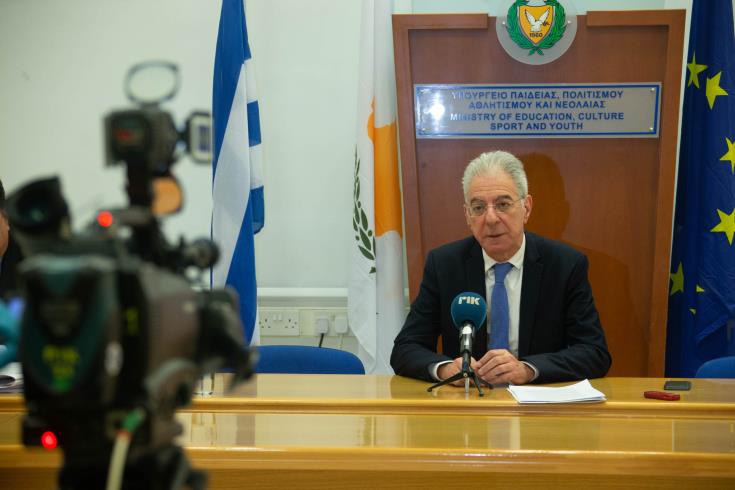 More than 110 thousand teachers and pupils have access to the distance learning system, the Ministry of Education is developing, said Education Minister Prodromos Prodromou on Tuesday.

“We exerted great effort and we are pleased now that it has been successfully concluded,” the Minister said during a press conference.

Pupils not attending class during this period, due to extraordinary government measures aiming to protect public health amid the COVID-19 epidemic, will receive pedagogical support, Prodromou went on.

He also said that this very important task was completed by the Ministry’s Directorates, along with the Pedagogical Institute, in cooperation with the Deputy Ministry or Research, Innovation and Digital Policy.

“There is already a comprehensive infrastructure, in order to provide distance education and other pedagogical support in all public schools, in a comprehensive and systematic manner,” the Minister went on.

Prodromou said that public school principals have already contacted parents and pupils, through the teachers, and informed them about the way children can take part.

In cases where this was not possible, parents were encouraged to contact  schools and receive all relevant information. School principals received specific instructions, that everyone needs to follow in order to implement the measure smoothly, Prodromou said.

He also noted that schools developed action plans for their distance learning curricula, which will be adapted accordingly.

The relevant infrastructure will be fully activated on Thursday and almost all pupils will be able to attend regularly, by accessing a specific program, the Minister added.

He said moreover that they reviewed the situation concerning the technical capacity and internet connectivity of households. “These shortcomings are limited and I believe that we can address them,” Prodromou said.

He added that the government’s general policy orientation is to support children and families, in order to exclude nobody from the broader effort to provide pedagogical support at home.

Furthermore, the Minister congratulated the teachers who had already established contact through electronic means with their pupils, in a bid to support their class, on their own initiative and by using various programs.

Prodromou said that besides private schools, teachers working for public schools also showed that they were prepared to offer distance education or other support for children.

He also said that in the next few days, teachers will inform all grades about the distance learning system and other means of support that are being provided. Moreover, he pointed to the Ministry website and those of several schools containing education material.

As for the school term, that was interrupted due to COVID-19 developments, Prodromou called on parents and pupils to avoid taking into account any rumors. The Ministry announced that classes have been suspended until April 10, which effectively means that classes will not take place until April 26 due to Orthodox Easter holidays. “What happens next regarding the operation of schools will be announced on time by the Ministry,” he added.

Prodromou said that they need to have reliable data in order to take the necessary decisions and said that there is no need to rush. “Depending on broader developments and the course of the epidemic, the government will take the relevant decisions,” he said.

He assured that decisions will serve public interest, education and children in general. The Minister also explained that distance learning teaching will not be subject to any exams. Exams will only test what has been taught in class by the end of the school term, he concluded.

By Josephine Koumettou
Previous articleTrump challenged on his early bid to reopen economy
Next articleCoronavirus: Decrees will be enforced says Justice Minister