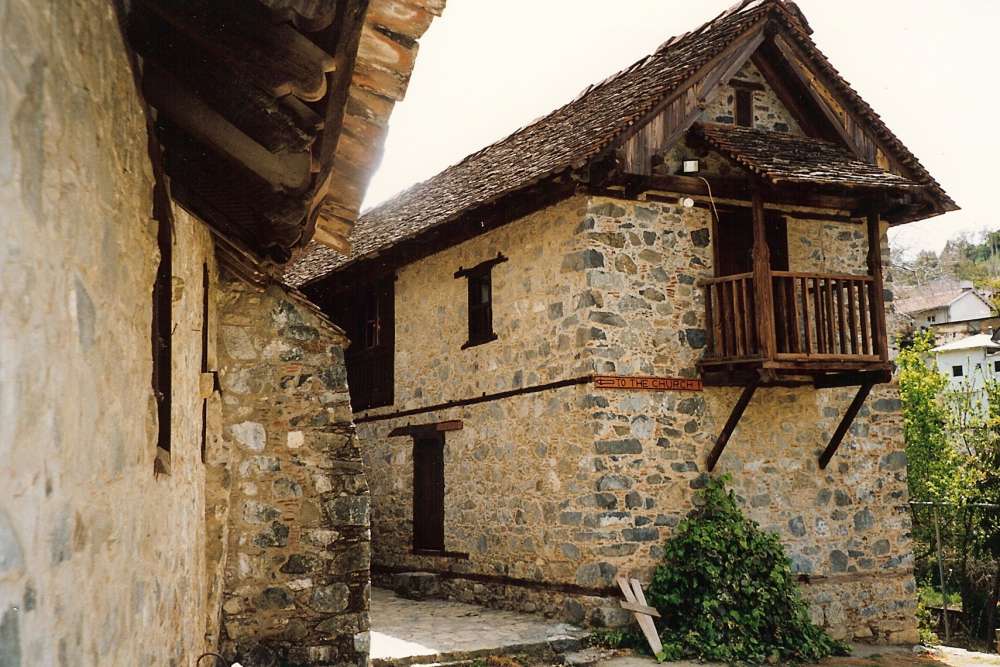 The exact founding date of the monastery is unknown. The katholicon (monastery church), which is dedicated to Saint Herakleidios, is dated to the 11th century. Among the wall-paintings of the narthex there is an inscription, dated to the 15th century, which describes this church as “katholiki”, i.e. the principal parish church of the village. According to other written sources the monastery functioned until the beginning of the 19th century. Since then it has been used as a church. In the middle of the 19th century a room of the monastic buildings was used as a classroom for the children of Kalopanagiotis and other neighbouring villages.

The group of buildings which survives today is the result of constructions and renovations of different periods. The main monastery church is a domed cross-in-square structure, dated to the 11th century. In the 12th century the chapel of Agios Ioannis Lampadistis was added to the north of the first church, above the tomb of the Saint. This second chapel collapsed and was almost entirely rebuilt in the 18th century. In the middle of the 15th century a common narthex was built to the west of the two churches.

During the second half of the 15th century a vaulted chapel was added to the north of that of Saint Ioannis. It became known as the ‘Latin chapel’ because of the assumption that it was built for the Latins (Catholics). Sometime between the 15th and the beginnings of the 18th century), a timber roof covered with flat hooked tiles sheltered the entire roof complex . As a result of its tripartite character, the building acquired an external image of a large building covered with a timber roof. 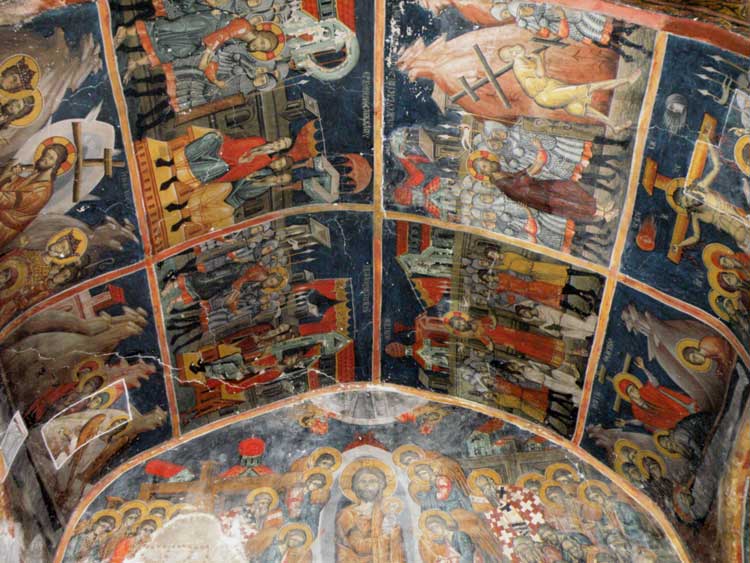 The wall-paintings of the monastery of Agios Ioannis Lampadistis are in accordance with its architectural history. The apse of the southern church of Agios Herakleidios, as well as some other parts, preserve fragmentary scenes dated to the 11th and 12th century. The rest of the church was painted in the 13th and 14th century. These frescoes are an important group and include some rare representations, as is the depiction of the Holy Handkerchief on the north pier supporting the dome.

The decoration of the narthex belongs to a later date and is the work of an artist from Constantinople, who fled to Cyprus after the fall in 1453. These wall-paintings follow the trends of the Byzantine capital, but are not of such high quality.

On the contrary, the frescoes of the ‘Latin’ chapel, (dated to around 1500), belong to the ‘Italo-byzantine’ style, which combines Byzantine and Italian Renaissance elements. In fact, it is the most complete set of this style in Cyprus. The “Latin” chapel, if it is so, denotes the coexistence of the two rites under the same roof and reflects the atmosphere of tolerance which prevailed in Cyprus after the Council of Ferrara-Florence (1439).

Worth mentioning is the wooden templon screen, dated to the 13th -14th century, with painted decoration imitating coats-of-arms. It is in fact the oldest wooden templon of Cyprus. Another important element of the monastery is the relic of Saint Ioannis Lambadistis, which is preserved in a precious reliquary. It is in a special niche and on the wall above it there are many signatures of eponymous and anonymous pilgrims and travelers who had visited the monastery in the past.

Apart from the complex of the three churches there are other monastic buildings including cells, auxiliary rooms and an oil press. One of the rooms is used today to house icons from the monastery as well as other churches of the village of Kalopanagiotis.