Mogherini: EU is standing united in solidarity with Cyprus 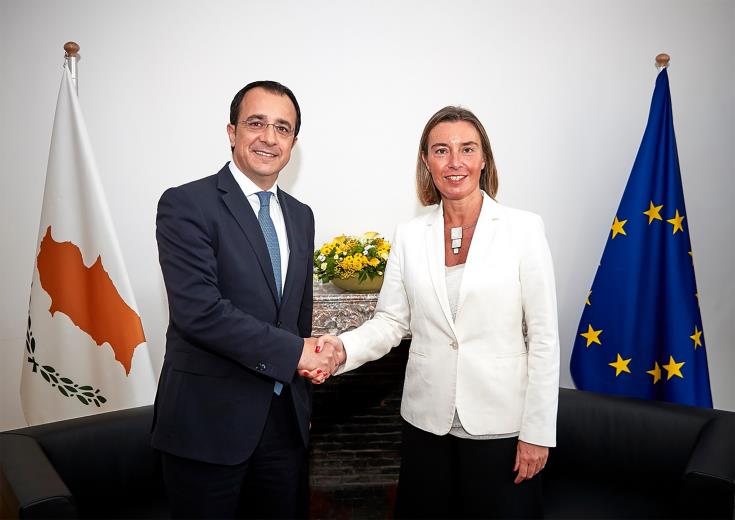 Solving the Cyprus issue within the UN framework “would be the game changer, not only for the drilling activities but also for Cyprus itself and the European Union and the entire region”, she also noted, , stressing that the illegal drilling is an act going the opposite direction and explaining that sanction is an instrument to help the United Nations.

“Thank you all for having expressed collectively what to me is the most important element, which is this full solidarity with one of our Member States – with Cyprus – and this unity is needed because it is constantly tested form the outside but also from the inside”, the High Representative stated.

“And it is a fundamental element of being together, the basic fact, that if the rights, if the sovereignty of one of our Member States is violated, as it is the case this moment with this Turkish drilling activities, the rest of the EU has to come together and not only show solidarity, but also act in solidarity with Cyprus”, she stressed. “And that is why it has been key for me, all these years to keep constant contact and coordination with Cyprus itself with one of our Member States and design the way we will react and shape our reaction with Cyprus”, F.Mogherini said.

Called to explain on what is coming next, Mogherini stated that “the framework is now established and now Member States – and I would expect that they would – present names, of individuals and entities, that would be analysed on a solid legal basis – you know that our sanction system is based on elements that need to resist the test of court judging, in case they are appealed against. So Member States now are going to present names of individuals and entities, this is going to be then analyzed by Member States themselves, through our Council procedures, and with unanimity the Council is going to adopt the further steps”.

“So this is what I expect to happen next”, she said, adding that “this can go very fast, or slower, depending on different bodies and depending also on the overall environment”.

“What I want to stress is this – I said also in the beginning: sanctions and the framework of introducing sanctions, is an instrument to put pressure and to try and provoke a change. The objective here is to change the attitude, stop the drillings, and – I am surprised not many of you did not underline this – try to help the UN finding what would be the real solution the settlement of the Cyprus issue”, the HRVP explained. “This would be it. And a united Cyprus inside the European Union. This would be the game changer, not only for the drilling activities but also for Cyprus itself and the European Union and the entire region”, Mogherini noted.

“So that is why I referred to the upcoming meeting that Mr.Gutteres has convened at the end of the month. It is important for us to stress that the European Union is continuing to look to that solution at that framework at the UN as the real solution for this issue and the settlement as such”, she stressed.

“Obviously and we have discussed this with our Turkish counterpart several time, including at my level, in the recent months, that this activities go the opposite direction”, she warned. “And this is an additional reason why we want to see them stopping”, she stated. “And reaffirm that the EU is standing united in solidarity with Cyprus”.