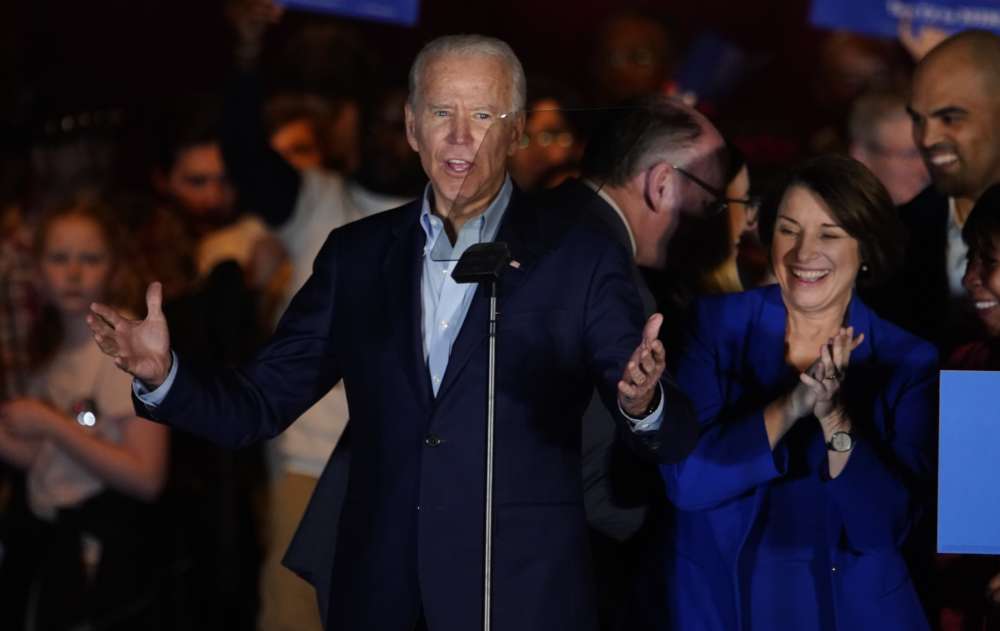 Buttigieg threw his support to Biden at an emotional appearance at a Dallas restaurant, while Klobuchar delivered a barnstorm of a speech at a rally, reminiscent of the types politicians give at their party conventions when anointing their presidential nominees.

“Joe Biden has dedicated his life to fighting for people,” Klobuchar said, before introducing Biden at the rally in Dallas on Monday night.

“Not for the rich and powerful, but for the mom, for the farmer, for the dreamer, for the veteran. He can bring our country together.”

Buttigieg, the former mayor of South Bend, Indiana, and the first openly gay presidential candidate, said earlier in Dallas that he was “delighted to endorse and support Joe Biden.”

“He is somebody of such extraordinary grace and kindness and empathy.”

Former U.S. Representative Beto O’Rourke, another former candidate for the Democratic nomination, also endorsed Biden, appearing to cheers as a surprise guest at the rally in Dallas.

Biden is fresh off a resounding victory in Saturday’s South Carolina primary and is aiming for a strong showing on Super Tuesday against Sanders, a self-described democratic socialist, who many centrist Democrats fear cannot win against Republican President Donald Trump in November.

But Biden still faces a challenge from billionaire former New York Mayor Michael Bloomberg among voters hoping the party will nominate a moderate to face Trump.

Bloomberg, a late entrant to the race, will make his ballot-box debut when 14 states vote on Super Tuesday. He is betting the $500 million of his own money he has poured into his campaign will allow him to make up for not competing in the first nominating contests in Iowa, New Hampshire, Nevada and South Carolina.

He said on Monday the most likely scenario was that no Democratic candidate would win a majority of delegates and that picking the nominee could come down to “horse trading” at the Democratic convention in Milwaukee in July.

Asked at a Fox News town hall if a contested convention lay in his path to the nomination, Bloomberg said: “That is the way that it would work I would guess.”

The Super Tuesday contests offer the biggest one-day haul of the 1,991 delegates needed to win the party’s nomination at its national convention in July, with about 1,357 delegates, or nearly one-third of the total number, up for grabs.

Five candidates – Biden, Bloomberg, Sanders, Senator Elizabeth Warren of Massachusetts and U.S. Representative Tulsi Gabbard of Hawaii – remain in the running for the Democratic nomination, down from more than 20 earlier in the campaign.

Bloomberg and Biden have emerged as the main contenders for the votes of moderate Democrats, while Sanders, a senator from Vermont, is the progressive front-runner nationally, eclipsing Warren.

At a rally on Klobuchar’s home turf in Minnesota on Monday night, he was gracious to his former rivals who endorsed Biden, praising Klobuchar as a hard worker and calling Buttigieg’s candidacy historic.

Biden’s high-stakes triumph in South Carolina, where his campaign had said his popularity with black voters would propel him to victory after early disappointing finishes in Iowa and New Hampshire, helped winnow the field.

Billionaire environmental activist Tom Steyer also gave up his campaign on Saturday after a third-place finish in the Southern state in which he had invested most heavily.

Sanders’ momentum might not be easily slowed. On Monday, his campaign played down the efforts by moderates to present a united front.

“The establishment is nervous, not because we can’t beat Trump, but because we will,” said Sanders’ campaign manager, Faiz Shakir. “And when we do, the Democratic Party will again be a party of the working class.”

It was not immediately clear who would immediately benefit from the departures of Buttigieg and Klobuchar. A Morning Consult poll taken Feb. 23 to 27, for example, before Buttigieg exited the race, showed that 21% of his supporters named Sanders as their second choice, 19% picked Biden, another 19% chose Warren and 17% favored Bloomberg.

Biden still lags his rivals in spending and organization in Super Tuesday states and beyond, but his campaign said on Sunday it had raised more than $10 million over the preceding two days.

Endorsements of the former vice president from elected officials and community leaders poured in on Monday.

By In Cyprus
Previous articleFine and sunny today, temperatures at 20 C inland and on coast
Next articleNetanyahu ahead in Israeli election, but still lacking governing majority