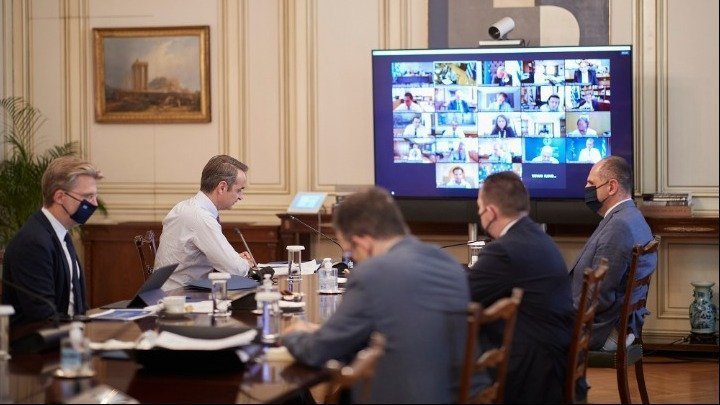 “The funding that Greece will receive through the Recovery Fund is a unique opportunity for the modernisation, reconstruction and overall productive reorientation of the national economy,” Prime Minister Kyriakos Mitsotakis said on Friday, during a virtual cabinet meeting.

He also noted that his original intention “was not to hold this cabinet meeting via teleconference, but for reasons of symbolism and taking into account the importance we attach to the full observance of the health and safety measures which have been recommended to us by the committee of scientists, I judged that we should continue to convene the cabinets via video conference. And of course we should also set a good example and wear a mask, as we already do in Parliament.”

Mitsotakis began with a reference to the “historic decision of the last summit in Brussels”.
As he said, “the total amount that the country will be called upon to manage, namely 72 billion euro, which is the sum of the new resources from the Recovery Fund and the regular resources of the Multiannual Financial Framework, constitutes the largest sum provided for the financing of our country in a time of peace and fiscal normality. As a result, it is a unique opportunity for the modernisation, reconstruction and overall productive reorientation of the national economy.”

“As I said in Parliament, the final solution of the agreement is fully compatible with what we claimed. From the Recovery Fund, most of the funds, about 19 billion euro, will correspond to grants. Thirteen billion euro will be in the form of loans with favourable terms. From the funds for the European budget we at least managed to protect the Cohesion Fund and we have strengthened the two main pillars of European policy, which our citizens perceive as a reference point of Europe, which are the NSRF and the Common Agricultural Policy. I want to emphasise that, especially in terms of the Recovery Fund, we get the largest percentage of grants as a percentage of our GDP in the euro zone. At the moment, we are able to say that this important success is followed by another challenge: in order to avoid losing even a single euro, not a single minute can be lost. So, if for most of our fellow citizens the last day of July is the first day of their vacation, August has in store for us fewer beaches and more work,” he added.

Mitsotakis said that “a draft report of the Commission for the Reconstruction of the Greek Economy is already completed. Academics, economists, from Greece and abroad, under the chairmanship of Nobel laureate Pissarides, have submitted a comprehensive Recovery Plan. His draft plan will be posted on the internet and released for public consultation on Monday. It is a draft plan that, on the one hand, identifies distortions but at the same time also highlights the advantages of the country, the spearheads of its potential. And it indicates 15 axes for the future prosperity of Greece and all Greeks. I want to emphasise that this plan will obviously be subject to constant updating and adjustments. Always listening to the messages of society, the proposals of the productive forces, the views of the parties, we aspire to be a useful, necessary I would say, compass for the safe course of the country in the troubled waters of the world economy.”