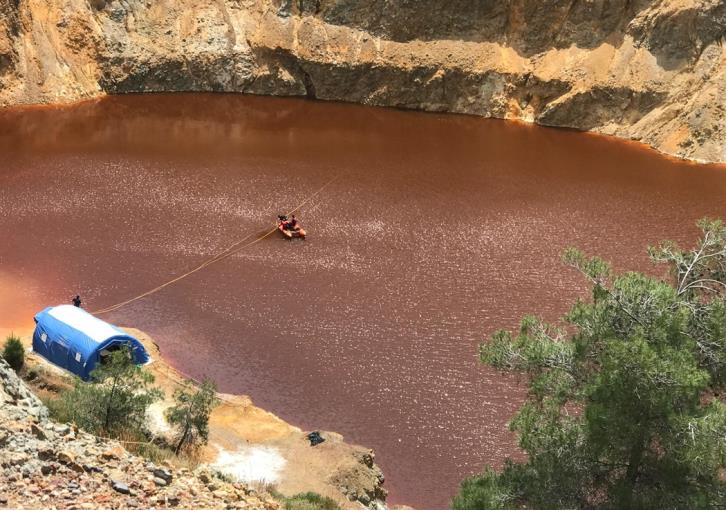 Scotland Yard investigators are at the Mitsero red lake, where a 35 year old suspected serial killer told police he dumped suitcases with the bodies of Livia Florentina Bunea, her eight year daughter Elena Natalia and that of Maricar Valdez Arquiola.

After Mitsero, the investigators will visit Memi lake in Xyliatos, where the body of six year old Sierra -— daughter of Marry Rose Tiburcio whose body was found in an abandoned mine shaft on April 14 — is believed to be.

The search for the victims of a 35 year old suspected serial killer will not stop, police spokersperson Andreas Angelides told reporters on Tuesday afternoon.

“The investigators will have a clearly-defined consulting role,” Angelides said.

The investigators have already met with the Chief of police and the Cypriot lead investigators of the case and have been briefed on the suspect’s profile.

Meanwhile, authorities and a private company providing divers and equipment for the search have placed 3 buoys in Mitsero’s red lake.

Fire service chief Markos Trangolas said that authorities have ordered a sonar system, which is expected to arrive on Friday to be used for the search in lake at Xyliatos and Mitsero.

Police have come under fire over the way they handled the disappearance of the women  and children. Lyvia and Elena were reported missing in September 2016, Maricar at the end of 2017, Marry Rose and her daughter in May 2018 and Arian in July 2018.

Responding to the criticism, Angelides reiterated that the police chief had ordered an administrative inquiry which would assign responsibility if any dereliction of duty is found.

“The Chief of police has assigned a trilateral committee to conduct the inquiry,” Angelides said. “They will first interview people who have submitted complaints regarding the disappearances.”