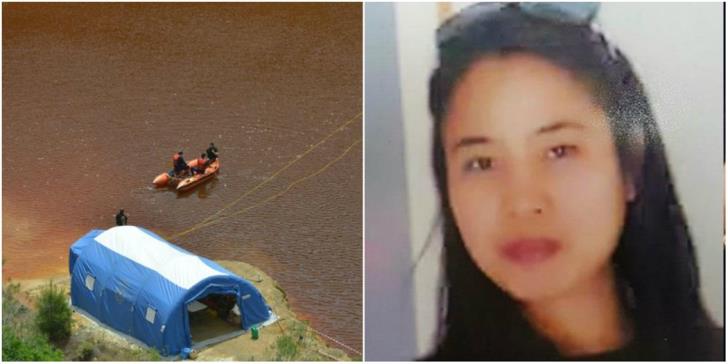 The discovery of a cement block in Kokkini Limni on Tuesday has raised hopes that search parties will soon find a third suitcase with the body of a murder victim, fire services chief Markos Trangolas said on Wednesday.

He told the Cyprus News Agency that the cement block that was found and recovered by a diver at a depth of 13 metres in the toxic lake was “totally linked” to the three suitcases.

A self-confessed serial killer has told police that he killed five women and two children, disposing of the bodies in four different locations.

Five bodies have already been found — two in an abandoned mine shaft in Mitsero, two in suitcases in Kokkini Limni and one in a dry well in Orounta firing range.

The suspect, a Greek Cypriot army officer, also told police that he also threw the body of Maricar Valdez in Kokkini Limni. The seventh body of a six year old child he said he threw in Memi lake at Xyliatou.

Police have been searching for victims since the chance discovery of the first body in the abandoned mine shaft on April 14. Their efforts in Kokkini Limni, though assisted by sonar equipment and a robotic camera, has been hampered by low visibility and the mud on the lake bed.

But the search parties who have been at the lake for weeks caught a break yesterday when a diver found the cement block tied to a piece of rope and believed to have been used to weigh down the suitcase.

Another cement block had been found in the first suitcase recovered from the lake, and a second was found close to where the second suitcase with the body of an eight year old girl was found.

Trangolas said that the search today will concentrate on areas close to where the cement block was found.

“We are continuing to look despite the difficulties because the third suitcase must be found,” he said.

“After the discovery yesterday of the cement block we believe we will find the suitcase,” he told CNA.

The fire chief said that the cement blocks appeared to have remained in place while the suitcases were ‘carried away’ and it is this that the authorities are trying to establish.

Trangolas said that the search for a six year old girl at Memi lake was also very difficult, but said authorities would persevere.