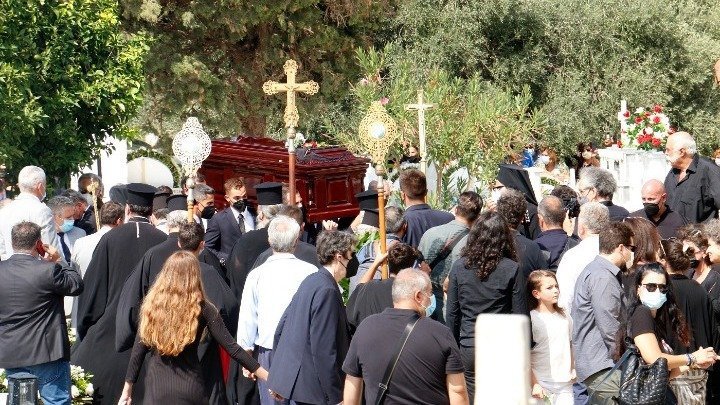 Accompanied by friends and relations singing his best beloved songs and the theme of ‘Zorba the Greek’, as well as the country’s state and political leadership, the body of renowned Greek composer Mikis Theodorakis was carried to its final resting place and lowered into the soil of his native Crete on Thursday.
In the presence of President of the Hellenic Republic Katerina Sakellaropoulou and surrounded by his family, Theodorakis was buried in his family grave at the village cemetery of Galata in Chania, next to his parents and brother.
All along the route between the cemetery and the church of Agios Nikolaos, where the funeral service was held, crowds of people from Galata and other parts of Crete gathered to see the procession and say goodbye.

Mitsotakis: ‘The last great Greek of the 20th century’

“Mikis Theodorakis will always be here. He will always be here, his work is immortal. A great Greek, a great composer,” Prime Minister Kyriakos Mitsotakis said on Thursday as he exited the church of Agios Nikolaos, after attending Theodorakis’ funeral.
“Today we say goodbye to him as he deserved. The last great Greek of the 20th century,” Mitsotakis added, noting that his songs will be hummed and sung by “ourselves, our children and our grand-children” in his memory.

The coffin carrying the late composer arrived at Agios Nikolaos Church in Galata just before 13:00 on Thursday afternoon where a funeral service got underway, led by the Metropolitan of Kydonia and Apokoronos Damaskinos with the participation of clerics throughout Crete.
The funeral service was held in the presence of President of the Hellenic Republic Katerina Sakellaropoulou, Prime Minister Kyriakos Mitsotakis, Parliament President Kostas Tasoulas, main opposition SYRIZA-Progressive Alliance leader Alexis Tsipras, Communist Party of Greece (KKE) General Secretary Dimitris Koutsoumbas and members of the late composer’s family.
Also in Galata for the funeral were Culture Minister Lina Mendoni, Citizen Protection Minister Takis Theodorikakos, MPs from all political parties, the regional governor of Crete Stavros Arnaoutakis and local officials on the island.
As a precaution against the spread of Covid-19, most of those gathered for the funeral, including the villagers, were spread outside the Church.

The body of the late composer Mikis Theodorakis, whose music came to define Greece and the Greek identity in the eyes of the world, arrived on the island of Crete early on Thursday morning and was first taken to the Cathedral of the Presentation of the Virgin in the city of Chania, where it lay in state until noon so that members of the public could pay their respects.

By gavriella
Previous articleCyprus in the red for another week on the ECDC’s epidemiological map
Next articleTruck reversed after accident at Nicosia-Limassol road, near Moni