Migrants camp on bridge between Guatemala and Mexico as U.S. pressure mounts 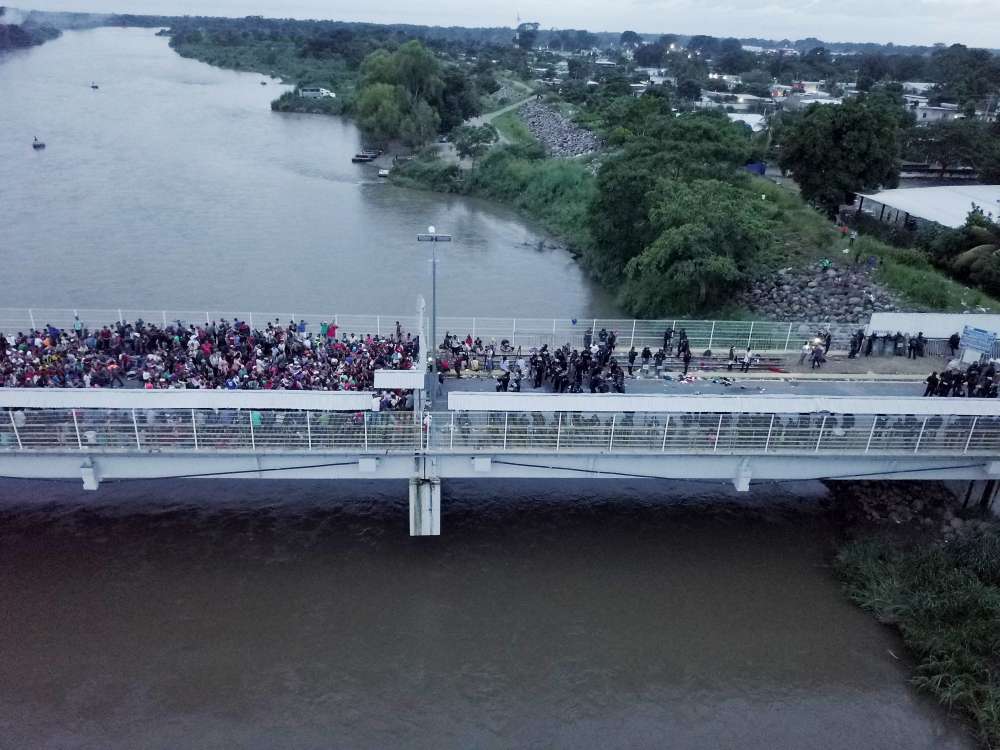 Hundreds of Central American migrants bedded down overnight on a bridge separating Guatemala and Mexico, many squeezed against a metal border gate, as efforts to halt a trek north by a caravan of thousands of people gathered pace under U.S. pressure.

U.S. President Donald Trump has warned the Central American caravan must be stopped before it reaches the United States, and Honduras and Guatemala said late on Friday they were mobilizing to return Honduran migrants to their homeland.

Earlier in the day, hundreds of migrants at the head of the caravan had poured through Guatemalan border posts and onto the bridge, but were repelled by dozens of shield-bearing Mexican police. Several complained they had been teargassed.

Drained from days of walking and frustrated, many prepared to spend the night in the open. Some stretched towels and garbage bags along the bridge walls, others lay down on backpacks, while a man applied lotion to his tired feet.

Mexico’s government, which says it will process migrants’ claims for asylum individually, vowed to tackle the caravan as U.S. Secretary of State Mike Pompeo met top officials in Mexico City. Pompeo urged Mexico to ensure the procession did not reach the United States.

Meanwhile, Honduran President Juan Orlando Hernandez was due to meet his Guatemalan counterpart Jimmy Morales in Guatemala on Saturday to implement a strategy for returning the Honduran migrants, their two governments said.

Most of the migrants that Reuters spoke to said they had no idea how to get the documentation needed for Mexico. But many were determined to try.

“No, I’ll fight. I’ll try again,” said Honduran Hilda Rosa as her four teenage children sat upright, beaming as she pumped the air with her fist.

The native of Tegucigalpa told a familiar tale when asked why she had left Honduras: “You know why: no work, violence.”

Most of the people now caught trying to enter the United States illegally hail from Honduras, El Salvador and Guatemala, among the poorest and most violent countries in the Americas.

A few of the caravan members, who ranged from farmers and bakers to housewives and students, and included a whole block of friends and family from the Honduran city of El Progreso, said they would start going back to where they came from on Saturday.

Jose Ramon Rodriguez, 45, a construction worker from El Progreso, sat on the Guatemalan end of the bridge with his head hanging low, his 9-year-old son tucked against him.

“Tomorrow we go home,” he said. His companions nodded.

Among them was Osman Melgar, who nursed a bleeding gash on his shin, suffered when he fell as dozens of people packed on the bridge began fleeing when police, according to several eyewitnesses, used tear gas.

Some, including 40-year-old Adriana Consuelo, went under the bridge, paying raftsmen 25 pesos ($1.30) to ferry them across the Suchiate River on vessels made of giant rubber tires.

After making it to the muddy banks of Mexico, she said “No one checked my documents,” as she headed to a taco restaurant.

But Mexico had stepped up its efforts to stop the flow of people, migration experts said.

“Every time there’s a (migrant) caravan there are police sent to the southern border … but we’ve never seen anything as dramatic as we’re seeing today,” said Eunice Rendon, coordinator of migrant advocacy group Agenda Migrante.

“This has everything to do with Trump,” she added.

By In Cyprus
Previous articleNew dust alert, scattered showers in the afternoon
Next article46 year old man arrested for possession of drugs and steroids