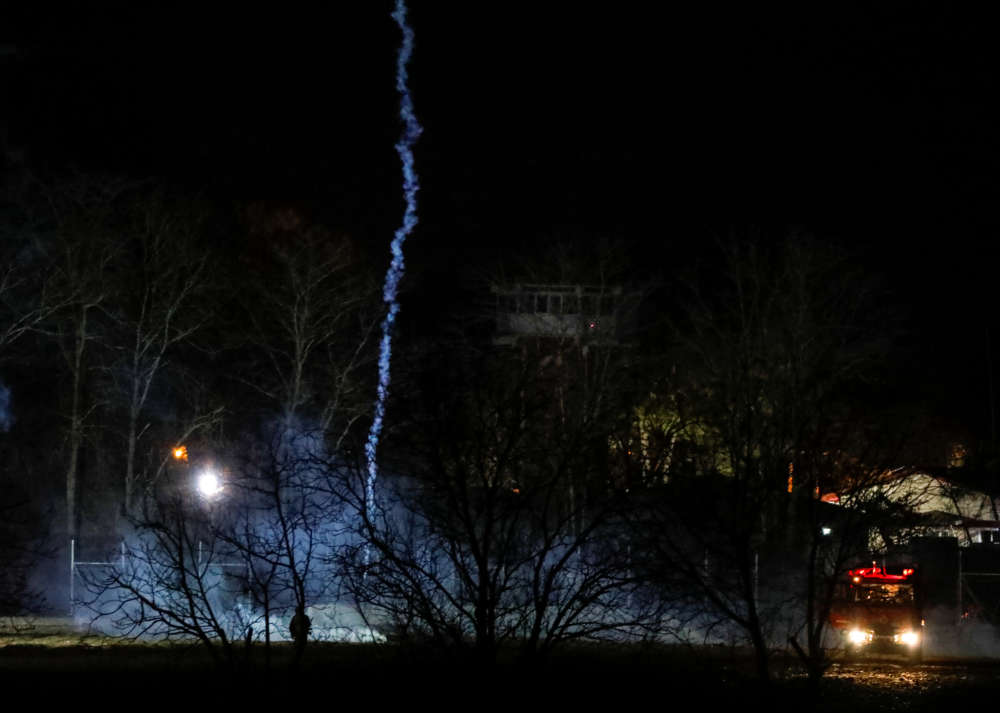 The European Union has pleaded with migrants on the Turkish border to stop trying to cross into Greece but dangled the prospect of more aid for Ankara as a standoff between Greek riot police and refugees entered a second week.

Tens of thousands of migrants have been trying to get into Greece, an EU member state, since Turkey said on February 28 it would no longer try to keep them on its territory as agreed in 2016 with the EU in return for billions of euros in aid.

Greek and Turkish security forces again deployed tear gas on Friday, witnesses said, sending plumes of smoke above the Kastanies-Pazarkule border crossing. Some migrants dabbed stinging eyes with water. Other trekked through fields probing for chinks in the well-guarded frontier.

“The news about the alleged openness (of the Greek-Turkish border) is false and people should not try to move there,” the EU’s top diplomat, Josep Borrell, told reporters during a meeting of EU foreign ministers in Croatia.

The EU could offer more money beyond the 6 billion euros ($6.79 billion) pledged in 2016 to help the refugees but Turkey must first stop using them as a “bargaining chip”, he said.

Turkey, which hosts nearly 4 million Syrian war refugees, says the EU has failed to honour earlier promises. It also wants more European support in Syria, where its troops are facing off against Russian-backed Syrian government forces.

In a sign of the EU’s hardening stance since the 2015 migration crisis, when more than a million migrants entered Europe from Turkey, the ministers in Zagreb said they were ready to take “all necessary measures” to stop illegal crossings into Greece, without elaborating.

Turkey’s foreign ministry slammed the statement, saying it showed EU countries were using migrants as political tools, and that they were allowing international law to be “trampled”. It said EU support for Greece showed the bloc was allowing its own values and laws to be disregarded.

“EU countries, including Greece, must abide by their international responsibilities and accept the applications of refugees,” the Turkish foreign ministry said in a statement, adding that the comments showed the EU did not understand the burden Turkey had to carry in hosting the migrants.

“Accusing a country that hosts the most number of refugees in the best possible way of using migration for political aims is another indication of the two-faced approach we have been subjected to for years. With this statement, the EU is itself using this issue as a political tool,” it said.

Migrants such as 18-year-old Ahmad al-Sadeq, from Syria’s war-ravaged Idlib province, are unlikely to heed such warnings.

“We will stay here for months. We hope that public pressure will grow and force the Greek government to change its mind. The situation requires some heart, not tear gas and fences,” said Sadeq, who got into Greece on Thursday but was then sent back.

“We left Syria to escape a government that murders women and children … and now we are here at Europe’s mercy.”

But Fawzi Uzbek, 37, an Afghan national who wants to reach Germany, said he would probably soon head back to Istanbul, where he has been working in a factory for about 18 months.

“The Greeks know that if they open the gates they will get many more people (arriving) on this side of the border,” said Uzbek, sitting in a makeshift tent he had constructed near the border for himself, his wife and four children.

About a quarter of the migrants at the border are Syrian and most of the rest are Afghans, Pakistanis, Iranians and Africans, according to Turkish estimates.

Greece says it has repulsed around 35,000 migrants trying to cross its border in the past week. Turkey has deployed 1,000 special police to the area to halt the pushback of migrants onto its territory.

Athens plans to extend its border fence by a further 40 km (25 miles), sources with knowledge of the matter said. It has also stepped up naval patrols in the Aegean to deter migrants trying to reach Greek islands such as Lesbos by dinghy.

Turkey’s coastguard rescued about 120 migrants, including small children, early on Friday. The migrants said the Greek coastguard had disconnected their boats’ motors, leaving them adrift in the Aegean.

On Lesbos, just a few miles (km) from the Turkish coast, fishermen, hoteliers and shopkeepers expressed concern that more migrant arrivals would further harm their island’s reputation as a dream holiday destination.

“Most businesses, at least tourism businesses, are going to hell,” said Vangelis Papastavros, whose wife owns a hotel in Mytilene, the largest town on an island which already houses some 20,000 migrants in camps in mostly squalid conditions.

Turkey’s President Tayyip Erdogan discussed the crisis with German Chancellor Angela Merkel on Friday, saying migration regulations between Ankara and the EU were not working and needed to be revised, the Turkish presidency said.

The EU’s Borrell said a new ceasefire deal brokered by the presidents of Turkey and Russia for Syria’s Idlib province could facilitate increased humanitarian help to Syria and for the refugees housed in Turkey. He said the EU would host a donor conference on June 29-30.

But such news provides scant comfort for the migrants stranded at the Greek-Turkish border. On Friday night, the occasional pop of teargas was permeated by Christian hymns on a loudspeaker from a small chapel on the border, a service common during a period of abstinence observed before Easter in Greece.

Sawsan al-Musawa, who travelled 1,300 km (800 miles) with her four children from a Syrian refugee camp in southeast Turkey to the Greek border, said she had all but given up hope of ever reaching Europe.