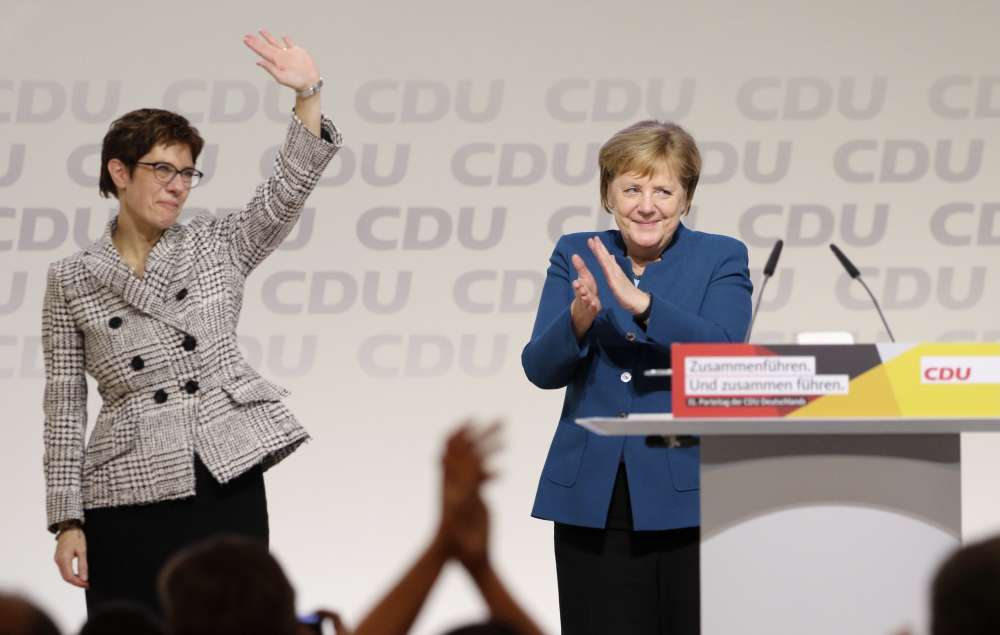 Germany‘s Christian Democrats elected Annegret Kramp-Karrenbauer on Friday to replace Angela Merkel as party leader, a decision that moves her into pole position to succeed Europe’s most influential leader as chancellor.

Kramp-Karrenbauer, 56, is Merkel’s protege and was the continuity candidate favoured by the party elite. She won the leadership with 517 votes out of 999 votes cast by delegates. Her rival, Friedrich Merz, won 482 votes in a run-off.

A former state premier in Saarland, where she led a three-way coalition, Kramp-Karrenbauer has a reputation for uniting support across the conservative Christian Democratic Union (CDU) and a talent for striking alliances with other parties.

Sometimes dubbed “mini Merkel”, Kramp-Karrenbauer is admired by the CDU upper echelons for her appeal across the party.

“I have read a lot about what I am and who I am: ‘mini’, a copy, simply ‘more of the same’. Dear delegates, I stand before you as I am and as life made me and I am proud of that,” Kramp-Karrenbauer said in a passionate speech to the congress.

Playing up her experience in regional government, she added to cheers and loud applause: “I learned what it is to lead – and above all learnt that leadership is more about being strong on the inside than being loud on the outside.”

Merkel said in October she would step down as party chief but remain chancellor, an effort to manage her exit after a series of setbacks since her divisive decision in 2015 to keep German borders open to refugees fleeing war in the Middle East.

During the leadership campaign, Merz delighted rank-and-file CDU members hungry for a more clearly defined party after 13 years of consensus-type leadership under Merkel by calling for tax cuts and a more robust approach to tackling the far right.

But the party delegates – many of them career politicians – preferred Kramp-Karrenbauer, often known by her initials, AKK.

“She is a safe bet: a centrist candidate who does not threaten nasty surprises,” said Josef Joffe, publisher-editor of weekly Die Zeit.

“Merz was just a bit too free-market, pro-American and pro-defence. Also, his pitch to the convention was wooden compared to AKK’s passionate appeal. Still, he forced her into a run-off, which suggests that AKK will preside over a divided party.”

There was jubilation as the result of the run-off was announced. A tearful Kramp-Karrenbauer thanked her rivals and invited them to share the stage with her in a show of party unity, which delegates applauded.

The Social Democrats (SPD), junior partner in Merkel’s ruling coalition, congratulated Kramp-Karrenbauer and offered to work constructively with her.

The hardline Left party and the far-right Alternative for Germany lamented what they saw as the dawn of “Merkel 2.0”.

Merkel, 64, has presided over Europe’s most populous country and powerful economy for 13 years.

Earlier, an emotional Merkel bowed out as party leader, telling the congress: “It has been a great pleasure for me, it has been an honour.”

Kramp-Karrenbauer has differentiated herself from Merkel on social and foreign policy by voting in favour of quotas for women on corporate boards and taking a tougher line on Russia.

She told Reuters last week that Europe and the United States should consider blockading Russian ships over the Ukraine crisis.

She also took a more cautious stance on the future of Europe than Merz, who said Germany should “contribute more” to the European Union as it benefits from a euro common currency that is “too weak for our economy”.

But on what lies ahead for the CDU, Kramp-Karrenbauer said when campaigning: “I have no particular recipe.”

That practical, non-ideological approach is similar to the style Merkel has employed as chancellor. Party insiders say Kramp-Karrenbauer gets on well with Merkel. “The chemistry is good,” said one senior CDU official.

By In Cyprus
Previous articleMainly fine with some light showers possible in the afternoon
Next articleUpdate: Six people, mostly teenagers, killed in Italy nightclub stampede