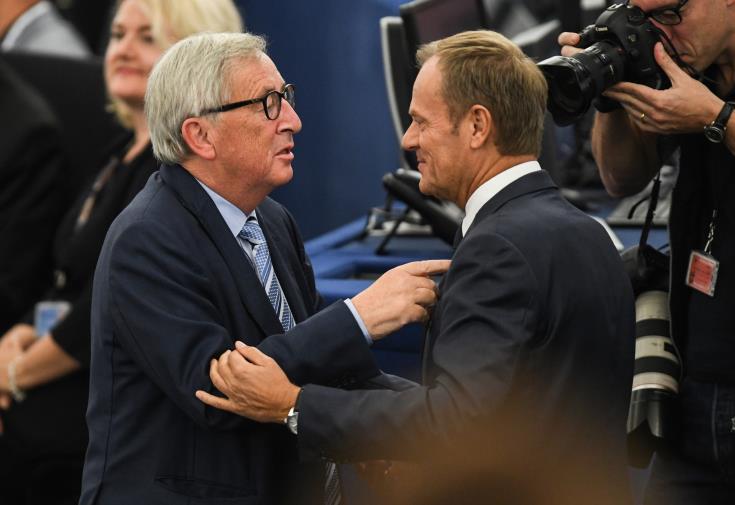 The European Parliament debated on Tuesday morning the results of the last European Council, held on October 17-18, that lent support to Cyprus over Turkey’s illegal drilling activities, among other decisions. Opinions expressed during a discussion on Brexit in the plenary were more divergent.

European Council President Donald Tusk and European Commission President Jean-Claude Juncker had the opportunity to address the EP one last time, as their term comes to an end soon. EPP leader Manfred Weber proposed the adoption of sanctions for Turkey’s behaviour.

Addressing the plenary, Tusk said that the European Council reconfirmed its full solidarity with Cyprus, faced with Turkey`s illegal drillings off its coast. Speaking about Turkey’s military action in North East Syria, he noted that “no-one is fooled by the so‑called ceasefire.”

He called moreover on Turkey to “end its military action permanently” noting that any other course would entail unacceptable human suffering, a victory for the Islamic State and a serious threat to European security.

On Brexit, Tusk said that the Council just finalized the necessary steps for the EU`s approval, and said that the European Parliament has an important role to play.

The situation is quite complex, the European Council President added and said that he was consulting with the leaders on how to react, and will decide in the coming days.

“It is obvious that the result of these consultations will very much depend on what the British parliament decides, or doesn’t decide. We should be ready for every scenario” said Tusk and reiterated that a no-deal Brexit will never be our decision.

Moreover, Tusk said that not opening accession talks with North Macedonia and Albania was a mistake and expressed hope that leaders will draw the right conclusions, when they discuss the accession process before the Zagreb summit in May 2020.

Turning to Jean-Claude Juncker, he said that despite the past five difficult years for the Union, they always cooperated in good faith. “I can say without hesitation that Jean-Claude has always been devoted to Europe and served Europe well” he concluded.

On his part, Juncker said that during his political career, he attended 147 European Council sessions and addressed the plenary 105 times. On Brexit, he said that the Commission has worked tirelessly to negotiate and renegotiate an agreement with the United Kingdom, to respect the UK`s decision to leave the European Union.

The agreement we reached with the United Kingdom`s government addresses all Parliaments` demands, he added.

“We need now to watch events in Westminster very closely. But it is not possible, not imaginable that this Parliament would ratify the agreement before Westminster will have ratified the agreement” the Commission President said. “First London, then Brussels and Strasbourg” he added.

Speaking about the EU budget, he said that it is time to come to an agreement with the Council and warned of a possible impasse, particularly during the first two years of the multiannual financial framework.

Taking the floor, EPP President Manfred Weber said that Turkey has invaded Syria illegally and expressed regret that the Council could not take appropriate measures.

He also referred to Ankara’s illegal drilling activities, the deterioration of press freedom in Turkey and the handling of the refugee issue and wondered about Europe’s response.

Since Turkey is behaving aggressively, we also need to discuss sanctions, Weber said, adding that it is not possible for Turkey to only benefit from the Customs Union.

S&D President Iratxe García Pérez also send a message of solidarity to Cyprus, noting that we will not allow Turkey to continue its illegal drilling activities in the EEZ while Cyprus’ sovereignty needs to be respected.

Nicolas Bay, Vice-Chair of the Identity and Democracy Group, said that Turkey occupies for 45 years a large part of Cyprus and now proceeds with illegal drilling activities in the EEZ. He added that Ankara violated international law by interfering in Syria and strengthened jihadists with this move.

Lefteris Christoforou, a Cypriot MEP for the EPP, said that Turkey cannot continue benefiting from the Customs Union, the internal market and get EU support while invading countries, such as Syria. He added that Weber’s proposal for financial consequences should be adopted against Ankara.

He also referred to Turkey’s invasion of Cyprus, 45 years ago and said that this aggressive and expansionist behaviour should be contained.

Chief EU negotiator on Brexit Michel Barnier also took the floor to discuss Brexit developments and the way ahead, while other MEPs also took part in the debate, reflecting diverging opinions around Brexit.