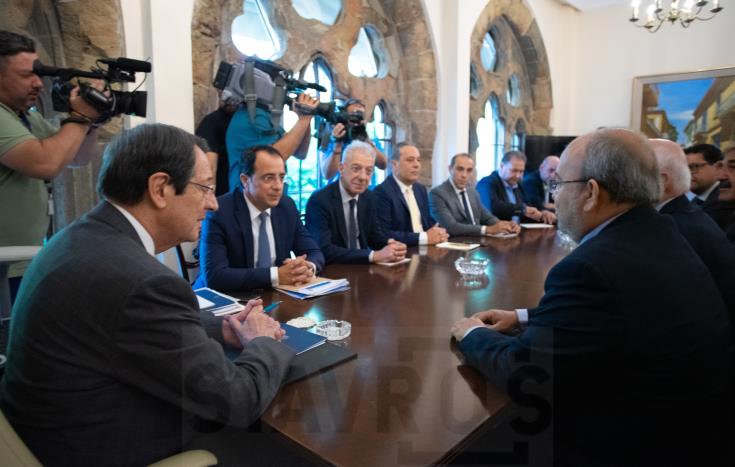 A report prepared by the Foreign Ministry over the possible recourse by the Republic of Cyprus to the UN Security Council over Turkish provocations in the fenced off area of Famagusta, is in the President’s hands, the government spokesman announced.

Prodromos Prodromou further said that soon there will be announcements on the issue.

The report was discussed during a meeting of President Nicos Anastasiades and Foreign Minister Nicos Christodoulides with the newly elected mayor of Famagusta Simos Ioannou and the municipal  council.

Prodromou said the meeting was very useful as it gave the President and the Minister a chance to be informed on all the relevant issues involved and how the situation stands as well as the measures and moves which the government of the Republic of Cyprus is taking.

Prodromou said there will be a complete coordination with the government and the municipality to achieve the effectiveness of the measures that are underway.

The President said that the issue of Famagusta was discussed and soon the relevant announcements will be made.

The Spokesman further said the two women that were illegally detained on Sunday were expected to be released. On the issue of the 16-year-old boy who took down the flag of Turkey as well as a picture of the late T/C leader Rauf Denktash last Sunday, the Spokesman said private initiatives were underway too. We really hope that this issue ends because it should not become an issue of political exploitation, he added.

On his part, Famagusta Mayor Simos Ioannou said that the President informed them thoroughly on the actions he has undertaken for Famagusta and the Cyprus issue.

He further said that Famagusta Municipality will provide information to foreign media, such as Euronews, to promote the issue of Famagusta, while municipal cuncil delegation will visit Brussels on October 14 for meetings with EU officials. Moreover a protest is being organised during President Anastasiades’ speech at the UN General Assembly.

Ioannou added that their proposal to President Anastasiades to convene the National Council on the issue of Famagusta has been accepted.

In response to another question, he also said that the Municipality had discussed with the Foreign Minister the issue of taking measures to avoid the sale of the property in the Turkish occupied areas.

Asked if owners are being approached by investors to sell their properties in Famagusta, he answered affirmatively, noting that they are not only Turkish or Turkish Cypriot investors but also foreigners.