MED7 stress need for solidarity to address the migration issue 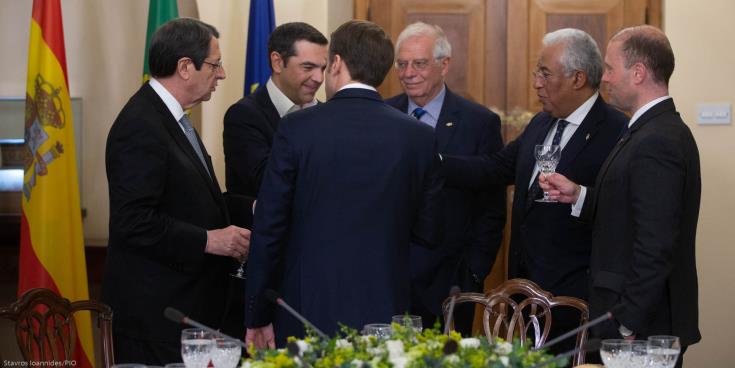 The seven Southern EU Countries have called for a comprehensive approach to the issue of migration as well as for solidarity among the EU members states in order to address this major challenge for Europe.

Following their  deliberations on Tuesday afternoon in Nicosia, the leaders of Cyprus, France, Italy, Greece, Portugal and Malta and the Foreign Minister of Spain made statements to the media.

Among the issues discussed were  the migration challenges, the reform of the Eurozone, the energy security of the European Union and climate change.

On the critical issue of migration, there was a unanimous position that collective effort, cooperation, unity and in particular solidarity, are required, President Nicos Anastasiades said.

“I am completely satisfied that the Nicosia Declaration inscribes objectively the problems in question, pointing out also the need for Turkey to fulfil all its obligations toward Cyprus, including cooperation as well as effective and implementation of the Readmission Agreement with the European Union, without discrimination,” the President of Cyprus said.

Moreover he noted that in view of the imminent signing of the relevant interstate agreement, leaders had stressed the necessity to push forward the “EastMed” pipeline for the transfer of natural gas, and underlined the decisive contribution that this pipeline will have on the energy security that is sought and on the diversification of the energy sources and supply corridors of the Union.

“I had the opportunity, during the discussion of this issue, to express my warm thanks to our friends, the leaders, for the support and solidarity they have been demonstrating over the years to the Republic of Cyprus, in the course of the exercise of its sovereign rights with regard to the exploration and exploitation of the natural resources within its Exclusive Economic Zone,” Anastasiades said.

He noted that he briefed his colleagues on the latest developments on the Cyprus problem, reiterating his full support for the efforts of the UN Secretary General and his Special Envoy, for the resumption of the talks on the basis of the agreed upon framework and the terms of reference that are being formulated.

“As I explained to our friends, our colleagues, what we look forward to is to achieve a solution that will be functional so that it will be viable, always on the basis of the resolutions of the Security Council of the United Nations. A solution that will create a functional state within the Union, with full respect for the European principles and values, for the benefit of all the people, Greek Cypriots and Turkish Cypriots,” he stressed.

He said that they agreed that the European Union, by itself, is a guarantee for prosperity and security on which all Cypriots can depend.

President of France Emmanuel Macron said relations between Cyprus and France are excellent and they are nourished with exceptional communication and cooperation especially in the sectors of energy and defence.

He noted that Cyprus is indeed an important port for the air-naval Charles de Gaulle “and I would like to thank and demonstrate again this cooperation shows this sovereign Europe which can protect itself and this is a very important dimension of defence, and during last year.”

Macron said that the Summit was an opportunity to reconfirm our solidarity to Cyprus as well as the need for the sovereignty of Cyprus to be respected, an issue which he mentioned to Turkish President Tayip Erdogan.

Moreover he referred to the negotiations for Cyprus` reunification, noting the commitment of President Anastasiades vis-à-vis this issue, which is enormous for the EU and the stability of the region, as he said.

Referring to migration he said that Cyprus is one of the Mediterranean countries affected by it. He stressed that
“we are defending a pragmatic operation way of seeing migration” thanking the Prime Minister of Malta, for trying to find efficient and humane ways.

He referred to the respect for the Law of the Sea, noting that the Sea Watch 3 ship should go to Italy because it is closer. Moreover he recalled the principle of law, noting that “we have to struggle against trafficking and NGOs should also respect the rules within this kind of operations. All of the above can and should become a permanent mechanism. This was the object of our discussion, he noted.

The Prime Minister of Italy Giuseppe Conte said migration  is an issue that presents a major challenge for Europe. It is a challenge that might lead Europe to implode, feeling the reaching of joint vision, joint agreement.

In the Conclusions of the European Council last June, we heard quite clearly the stance based on solidarity and shared responsibility. It is there that we expressed quite clearly that the principles that anyone setting foot in any European country, actually sets foot in Europe as a whole, he noted.

He went on to say that we acknowledged that fact that we have not been able to resolve the major issues touching the countries of the European South. Our countries have a shared sensitivity and we have to work in order to find common solutions, he stressed.

I do not need to remind you that it is Article 80 of the EU Treaty that talks about solidarity and fair sharing of burden, Conte noted, adding  that  considering and acknowledging the fact that we have in part failed to give an answer to this problem, we should not be surprised to see our citizens turning their back to Europe.

We have a historical duty, we have responsibility towards our citizens. We have to adopt tangible initiatives, so that our people start believing again in Europe, the EU, he noted.

Greek Premier Alexis Tsipras called on Turkey to respect international law, both in the Eastern Mediterranean and in the Aegean sea.

He also expressed support for a just and viable Cyprus settlement, on the basis of UN resolutions and the EU acquis.

Such a solution can not provide for third party guarantors or occupation troops and needs to be for the benefit of all Cypriot people, he said.

Tsipras also noted that the benefits arising from the exploitation of natural resources – which,he said, is a sovereign right of the Republic of Cyprus – should be shared in a just and equitable manner between Greek Cypriots and Turkish Cypriots.

Speaking about the EastMed pipeline, the Greek Premier said it comprised a project of particular geostrategic importance and called on all stakeholders to cooperate for its implementation.

Tsipras also referred to the resolution of the name dispute with Skopje, saying that “this is a significant success for Europe” sending a message that “there are European solutions through dialogue and mutual understanding.”

The Greek Premier also referred to the migrant crisis and underlined the need to create a Common European Asylum System, on the basis of solidarity and fair burden sharing. In this respect, he said that revising the Dublin regulation was an important priority.

Prime Minister of Portugal António Costa expressed hope that 2019 is the year the Cyprus issue will be solved. Addressing President Anastasiades, the Portuguese Premier referred to the need to respect Security Council resolutions for the reunification of Cyprus, adding that “we hope this to happen soon.”

Costa also said that Europe is better prepared today to deal with a crisis, than it was back in 2008, he said however that European leaders need to go through with reforms. Among others he said that a new stability mechanism was necessary to act as a safety valve. He thanked finally Joseph Muscat for offering to host the next MED7 Summit in Malta.

Despite the differences there is a clear understanding that there needs to be a unified approach when to it comes to addressing migration and the reform of the Eurozone, said the Prime Minister of Malta Joseph Muscat.

He added that as frontline countries, the seven EU member states know through experience that “when push comes to shove we have found in many cases each other’s solidarity” and that “we are there to guard each other’s backs”.

Muscat said however that while dealing with migration, it should be clear that all are following the rules, both member states and NGOs.

The Foreign Minister of Spain Josep Borrell Fontelles said from his part that Africa should become a priority when dealing with migration. He added that Europe needs to have a balanced approach on the asylum system and safeguard the Schengen Area.

Borrell referred to Spain’s approach of cooperating with countries of origin as well as transit countries and called for the termination of illegal migration and for a more orderly way of regulating migration.