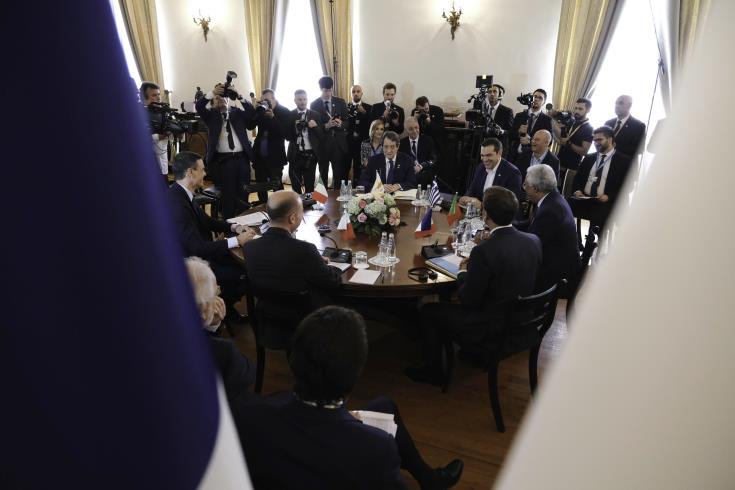 The southern EU member states leaders, who met in Valletta on Friday, in the context of a MED7 Summit, presented a united front on a number of challenges Europe is faced with, including social rights, climate change and migration, conveying their will for the European Union to promote solutions in practical terms.

In the Valletta Declaration issued after the leaders of France, Malta, Cyprus, Greece, Italy, Spain, Portugal concluded their consultations and their statements, they stressed the need for Europe to take action.

“A fair EU is one which puts its social agenda at the forefront,” the Declaration reads.

Europe, the MED7 point out, “must enhance its social dimension, empower and protect citizens, namely through equal opportunities and access to the labour market, fair working conditions and social protection and inclusion.”

“Reinforcing the common tools to fight youth unemployment should be high on the EU’s agenda,” they stress. In their statements, leaders spoke in particular of promoting a European Minimum Wage and the establishment of an EU fund in support of the unemployed.

“We are committed to further promote gender equality, including through an ambitious gender-equality strategy,” they also note in the Declaration calling “upon the incoming European Commission to prioritise LGBTIQ rights, building on the proposals in the joint non-paper on the future of the LGBTIQ list of actions signed by 19 Member States in December 2018.”

All leaders made reference to the necessity to take action to tackle climate change, pointing out that the matter is urgent. “We shall strive to jointly tackle the effects of accelerating climate change in the Mediterranean basin, and intensify work on the EU`s climate strategy, mindful of regional specificities, in order to implement the Paris Agreement objectives,” they note in the Declaration.

The MED7 express their concern “about the proliferation of plastic pollution and the effect that it is having on the marine environment and beyond.”

“We therefore welcome the adoption of a Directive on single-use plastics that will contribute to reduce the negative effects of plastic pollution in our seas,” they say.

With southern European countries having had to shoulder the burden of migratory flows the MED7 also referred to the need to deal with this issue which has not been resolved.

“We need to step up work on the internal aspects, such as the “Dublin” reform and the protection of“Schengen”, namely through the reform of the Common European Asylum System with swift adoption of all the legislative proposals with a view to establishing a legislative framework based on shared responsibility and solidarity as a matter of priority for the next Commission,” they stress in the Declaration.

“Together we continue to seek permanent and predictable solutions, which are now a matter of urgency,” they point out.

They also note that “third countries with the highest percentage of departure of migrants who subsequently enter the EU irregularly, face a specific challenge”, pointing out that “the EU should provide them with a long-term, predictable and stable political and financial association framework.”

The MED7 also make a point of expressing commitment to the EU- Africa relationship noting, among other things that “a prosperous Africa is key for the stability of the Mediterranean region and the European Union as a whole.”

“We are committed to maximise the potential of the EU External Investment Plan to contribute to Africa’s socio-economic transformation, particularly through education, health, infrastructure, innovation, digitalisation and women empowerment,” the leaders of the MED7 countries assure.

In a reference to RescEU, the newly established EU wide civil protection mechanism the MED7 express their commitment “to contributing to a Union that can provide a better crisis and emergency support to its citizens.”

“We will continue working towards the swift implementation of a Union Civil Protection Mechanism (RescEU) that will provide Member States with the means of dealing with disasters, including natural and other severe emergencies,” they say.