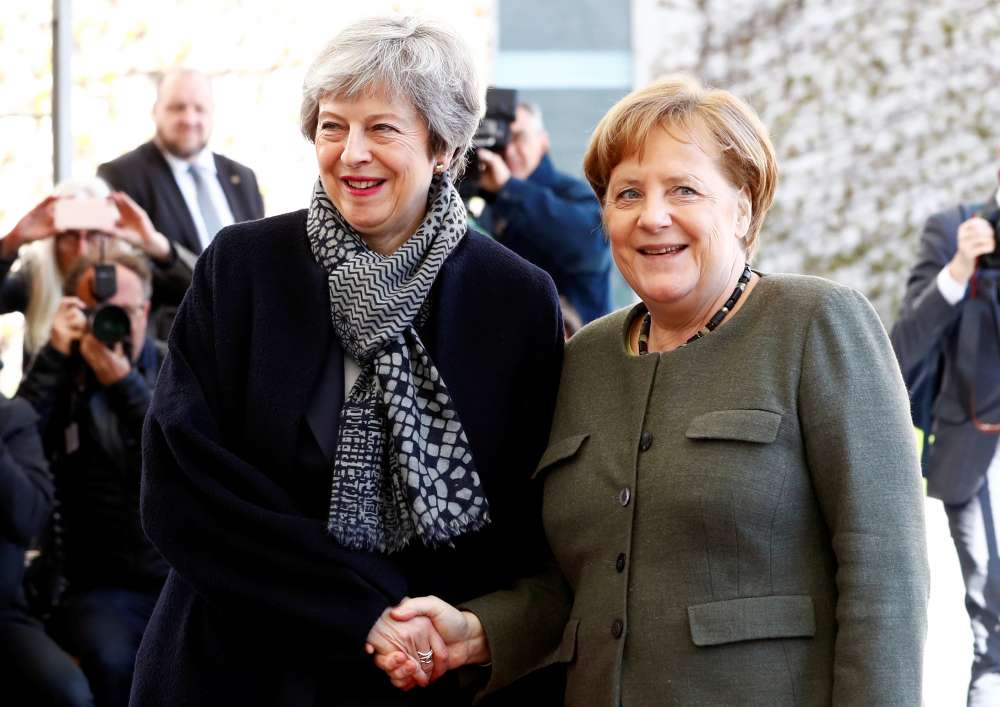 Theresa May was flying to Berlin and Paris on Tuesday to seek support for a new Brexit delay while her ministers tried to break the deadlock in London at crisis talks with the Labour Party.

More than a week after the United Kingdom was originally supposed to have left the EU, the weakest British leader in a generation has said Brexit might never happen as she battles to get a divorce deal ratified by a divided parliament.

With little sign of a resolution in London, May was visiting Europe’s two most powerful leaders, German Chancellor Angela Merkel and French President Emmanuel Macron, to seek support for her request to delay Brexit a second time, from April 12 to June 30.

On the eve of an emergency EU summit in Brussels, chief EU Brexit negotiator Michel Barnier said the bloc was ready to grand a delay, but that the duration “has got to be in line with the purpose of any such extension”.

Barnier also told a news conference in Luxembourg that he hoped the cross-party talks in London would yield a compromise.

EU leaders, fatigued by the three-year Brexit crisis, have repeatedly refused to renegotiate the Withdrawal Agreement May agreed in November, though on Tuesday there was speculation in London that Merkel might be open to doing just that.

“What I think would be fantastic is if Angela Merkel will try to support a proper UK Brexit by agreeing to reopen the Withdrawal Agreement,” said Andrea Leadsom, the government’s business manager in the lower house of parliament, the Commons.

Sterling rose half a percent to $1.3122 on speculation that Merkel could offer a five-year limit on the “backstop”, the controversial Irish border arrangement, but then fell back.

Barnier said he had no information about such a plan, and a German government spokesman said the report was “without any foundation”.

May met Merkel at her riverside Chancellery, a short walk from the Brandenburg Gate, where Ronald Reagan in 1987 urged Soviet leader Mikhail Gorbachev to “Tear down this wall!” – the barrier that had divided West and East Berlin since 1961.

Meanwhile in London, lawmakers were due to debate her Brexit delay proposal.

The debate was forced on the government by parliament passing a law on Monday giving lawmakers the power to scrutinise and even make legally binding changes to May’s request to extend the Article 50 negotiating period.

The 2016 referendum revealed a United Kingdom divided over much more than EU membership, and has sparked impassioned debate about everything from secession and immigration to capitalism, empire and what it means to be British.

Yet nothing is resolved and many opponents of Brexit say the whole divorce is at risk, especially if there is a long delay.

Unable to convince enough of her own Conservatives of the merits of her deal to get it passed, May is courting socialist Jeremy Corbyn, whose opposition Labour Party wants to keep Britain more closely tied to the bloc after Brexit.

With further talks scheduled on Tuesday between his team and government ministers, Corbyn said that “the prime minister has not yet moved off her red lines so we can reach a compromise”.

Labour’s demands include keeping Britain in a customs union with the EU, something that is hard to reconcile with May’s desire for Britain to have an independent trade policy.

The EU has been clear that it would accept a softer Brexit, but the idea is anathema to eurosceptics in May’s party who have helped to defeat May’s divorce deal three times this year.

If Britain’s exit is delayed beyond May 22, the EU has said it will have to take part in European Parliament elections. The British government on Monday took the legal steps necessary to take part in that vote.

Without an extension, Britain is due to leave the EU at 2200 GMT on Friday, without a deal to cushion the economic shock.

While the EU is not ultimately expected to trigger such a potentially disorderly no-deal exit, diplomats said all options were on the table – from refusing a delay to granting May’s request or pushing for a longer postponement.