Mavroyiannis: Let us continue the talks where we left off to help us clinch a strategic agreement 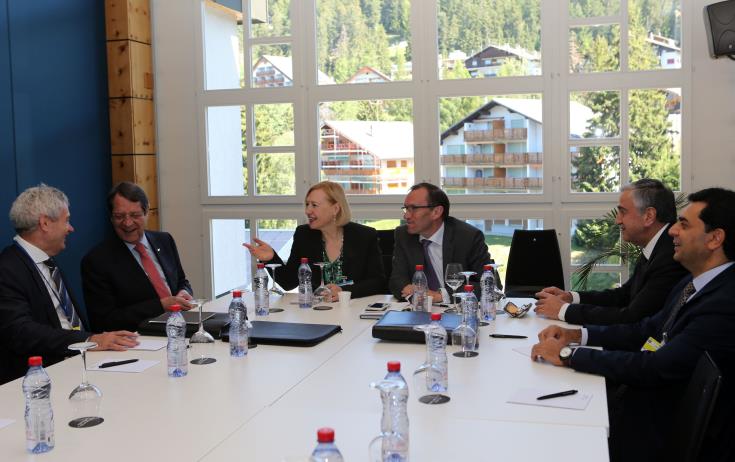 Τhe Greek Cypriot side has no substantial reservations with regard to the resumption of negotiations with a view to reaching a strategic agreement on a six-point package which the UN Secretary General has proposed on Cyprus, Greek Cypriot negotiator Andreas Mavroyiannis has said. “Our only reservation is whether the Turkish Cypriot and the Turkish side are willing to continue from the point the negotiations were left at” in July last year, at the Swiss resort of Crans Montana, he added.

“If they are ready to continue where we left off in July, this would be extremely positive and this is what we want,” he pointed out. What the Turkish Cypriot leader Mustafa Akinci says indicates that the Turkish side seems to “pick selectively” those points that suit it, he noted. The negotiator of the Greek Cypriot side underlined that “only within the framework of an overall and comprehensive package, the positions, the concessions or the positions of the parties make sense.”

Mavroyiannis said that President Nicos Anastasiades would be ready – in the framework of such a package that would provide for the immediate abolition of existing guarantees, the drastic reduction of troops to 650 soldiers and a sunset clause for the withdrawal of all troops, soon, within a certain period of time, as well satisfying Greek Cypriot positions on the territory issue – to accept the rotating presidency as long as there are, among other provisions, mechanisms to overcome deadlocks, a crystal clear distribution of competencies, cross voting and weighted vote.

All these make sense only within a package, the negotiator underlined, noting that the other side cannot ask the Greek Cypriot side to accept the rotating presidency and then move on to other issues.

Asked about the importance of a strategic agreement, Mavroyiannis said that certainly during a negotiating process nothing is binding until everything has been agreed, but what is important is to know the other parties’ position.

If there is a strategic agreement which outlines the way these issues will be solved, then one can begin to negotiate the rest immediately, and as there is an understanding on the strategic points the rest of the issues should not impede the conclusion of an agreement, he explained.

Talking to CNA on Thursday, Ambassador Mavroyiannis noted that the Guterres framework is not a document but ideas proposed by the UN Secretary General in Crans Montana, stressing that the UN does not submit official documents as it is not an arbitrator in the Cyprus peace process.

He explained that the UN Secretary General has said that from what he had heard he believed that there were six important points which, as a package, if negotiated and agreed, could constitute a strategic agreement, which would give a decisive push.

These points were discussed in Crans Montana and Guterres’ special advisor had put them down on paper, which both sides had contested. Following this, the advisor, Espen Barth Eide, talked to Guterres and presented to the two sides what the UN chief believed to be the six points. Negotiations took place again, he explained.

On the last night of the negotiations, (July 6, 2017) Ambassador Mavroyiannis recalled, Guterres said he would outline a brief text on how, in his view, the six points could be resolved. These points concern security and guarantees, troops, territory, property, effective participation and the Turkish citizens’ treatment in Cyprus after a solution, Mavroyiannis said.

These points were accepted as thematic topics by everyone, he noted. He also recalled that the Greek Cypriot side had prepared and submitted its proposals on 5 and 6 July in Crans Montana on the six points, as part of a package. “I believe that the positions we have submitted, and on the basis of what the UN SG has recorded in its report, meet that which Guterres had asked of us on issues relating to property, effective participation and the treatment of Turkish nationals,” he said.

With regard to the guarantees and the intervention rights, he recalled that the Prime Ministers of the three guarantor powers (Greece, Turkey and the UK) were not invited to Crans Montana as Turkey did not accept to satisfy the Secretary General’s position to abolish the guarantees and consequently there was no package.

The negotiator said that legally the Greek Cypriot side’s positions are not valid since there is no package. This does not mean that if the negotiations resume from the point they were left and from what Guterres had said, “we do not go back to what was on the table during the last night in Crans Montana.”

“We are now waiting for the Secretary General to send an envoy to see whether everyone is ready to continue from that point, and see how and what methodology this can be done,” he added.

Mavroyiannis said that the Greek Cypriot side is ready to discuss the methodology, the process, and the way forward. He noted that it does not take years to achieve a strategic agreement but what is needed is something similar to the process that was followed in Crans Montana with two tables were the internal and the external aspects of the Cyprus problem will be discussed.

Responding to a question, Mavroyiannis said “I would like the Turkish side to prove that it is interested in the continuation of the negotiations,” noting that valuable time would be lost if the visit of an envoy were to be postponed because of the June elections in Turkey.
The Turks cannot be saying, on one hand, that they are in a hurry and want a timeframe for the talks and on the other hand to delay the resumption of the peace process, he added.

Mavroyiannis described any notions about a “two state solution” in Cyprus as very worrying and dangerous, noting that there is no alternative to terminating Turkey’s occupation of Cyprus’ northern part and reuniting the country, to have peace and security and build a prosperous future for the coming generations.

“It is not morally conceivable to accept that we cannot all live together as Cypriots, as Europeans and we must not give up on this effort,” he concluded.

Cyprus has been divided since 1974, when Turkish troops invaded and occupied 37% of its territory. Talks in Crans Montana ended inconclusively because the Turkish side insisted on maintaining the right of intervention, retaining the existing system of guarantees and would not agree to a sunset clause on the complete withdrawal of foreign troops from Cyprus.

By In Cyprus
Previous articleNicolas Sideris Painting Exhibition
Next articleWithout an immediate radical change, there is no place for this Turkey in our Union, says EP President