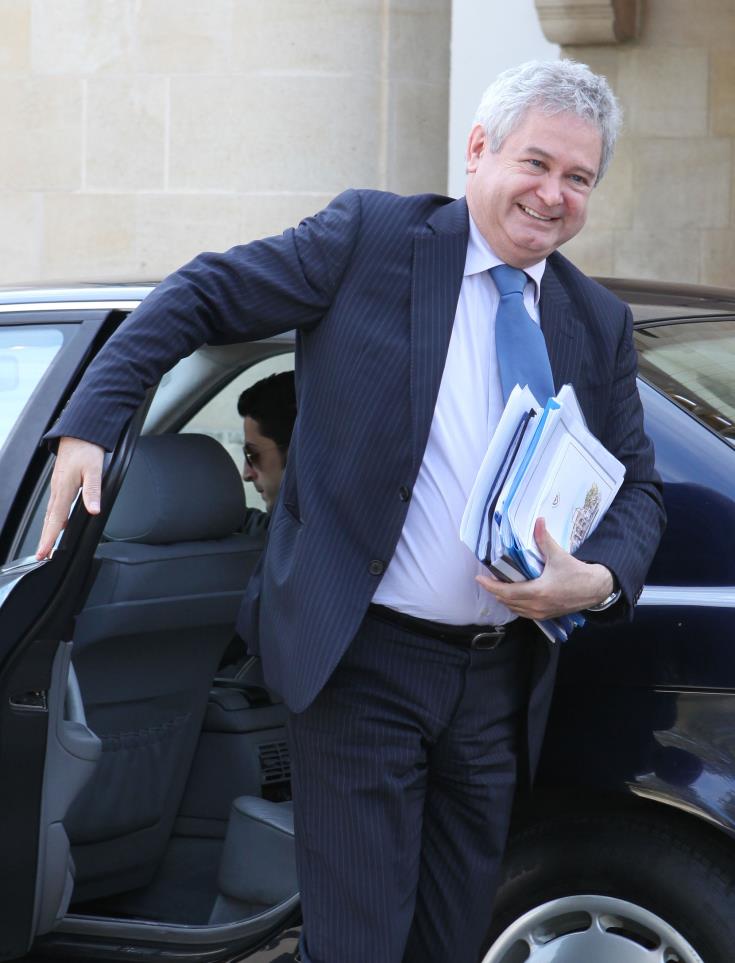 Andreas Mavroyiannis, the Permanent Representative of Cyprus to the United Nations, expressed cautious optimism regarding the prospects of recording substantial progress in the Cyprus issue. He was briefing members of the Federation of Cypriot American Organization and the International Coordinating Committee — Justice for Cyprus (PSEKA) about the latest developments, ahead of a meeting in Berlin, on November 25, between the UN Secretary-General and the Cyprus leaders.

The informal briefing was held on Tuesday evening, during a dinner hosted by the Federation.

Ambassador Mavroyiannis said that the meeting November 25 meeting aims to facilitate the resumption of settlement talks. “I can’t tell you that the conjuncture is optimal” and Turkey is not interested to see something happening in Cyprus, particularly now, he added.

He also referred to Turkish threats to open Varosha, the fenced-off part of Famagusta, for settlement and the continuous violations of Cyprus’ sovereign rights in its exclusive economic zone.

Turkish tactics in the last few months showed that their intention was to secure what they wanted in order to attend the negotiating table and this, he said, is not acceptable.

Mavroyiannis, also sent a letter recently to the Secretary-General, responding to recent allegations levelled against the Cyprus government by the Permanent Representative of Turkey.

In the letter, dated 29 October 2019, he notes that that for decades, Cyprus is not only the victim of Turkey’s aggressive and expansionist policies, but also as “the subject of its relentless propaganda that attempts to distort the past and pre-empt the future.”

“We have suffered an invasion that resulted in thousands of fatalities and persons who are still missing, destruction and massive violations of human rights, only to be insulted by the shameless branding by Turkey of this aggression as a ‘peace operation’” he says.

Mavroyiannis notes that the facts are well established and no doubts exist, despite the habitual misrepresentation of historical facts by Turkey in order to sanitize its own history.

The international community “has no place for historical revisionism that allows the perpetrators of ethnic cleansing to accuse their victims of the crime that they themselves have committed” he adds.

He says moreover that the intercommunal strife in the 1960s, which compelled the Cyprus government to request the deployment of the United Nations Peacekeeping Force in Cyprus (UNFICYP) in order to restore law and order and ensure better protection of all its citizens, could never justify Turkey’s unlawful use of force against Cyprus, regardless of the fact that Turkey itself incited and stoked this violence precisely in order to create a pretext to intervene.

As the facts on the ground speak for themselves, there is simply no way for Turkey to credibly claim that it did not invade and is not occupying a substantial part of Cyprus, he underlines.

He says, moreover, that armed aggression by one State against another not only is prohibited under international law, but also constitutes an international crime. The desperate attempt to find a basis for the invasion in the 1960 Treaty of Guarantee is futile, as, in its most extreme interpretation, the Treaty does not go beyond entailing responsibility for the maintenance of the constitutional order of Cyprus, provided that it is done in line with the Charter of the United Nations, he says.

“The use of force cannot be justified under the pretext of so-called ‘rights of guarantee’, nor can occupation, the displacement of hundreds of thousands of people and massive and persistent violations of human rights” Mavroyiannis says in the letter. And notes that these are the undeniable realities that Turkey has to account for.

Referring to the issue of hydrocarbons, Cyprus’ Permanent Representative to the UN stresses that “the threat repeated by Turkey in its letter is no longer a threat but a reality of daily violations of the sovereignty and sovereign rights of Cyprus in its territorial sea and its exclusive economic zone/continental shelf, including through the use of force.”

He goes on to say that despite the repeated calls by the Security Council “for a reduction of tensions in the Eastern Mediterranean ”, Turkey has, in effect, surrounded Cyprus with drilling and seismic vessels conducting illegal hydrocarbon exploration, escorted by numerous warships and daily patrols of armed, unmanned aerial vehicles, which, together with the increased number of military exercises, have led to an intense militarization of the sea around Cyprus.

At the same time, he adds, Turkey refuses to accept the United Nations Convention on the Law of the Sea and customary international law, including the fact that islands have maritime zones, and lays claims even over areas where it could not, under any circumstances, be considered an interested party under international law. As regards the Turkish Cypriots, Mavroyiannis says that the clearly unfounded claims by Turkey against the maritime zones of Cyprus are, ipso facto, injurious to all Cypriots, including Turkish Cypriots.

On the issue of Varosha, he says that as the fenced area of Varosha is under the direct and exclusive military control of Turkey, the latter bears sole responsibility for the lack of compliance with relevant Security Council resolutions since their adoption, as well as for the further violation of its obligations under those resolutions by allowing “scientific inventory work”.

“The fact remains that anything other than returning the fenced area to its lawful inhabitants under United Nations administration is a breach of the said resolutions” Mavroyiannis underlines.

He also says that Turkey should stop exploiting the deep-rooted desire of the displaced lawful inhabitants of Varosha to return in order to justify flouting the resolutions of the Security Council.

Cyprus’ Permanent Representative welcomes in his letter the claim that Turkey supports a just and lasting settlement to the Cyprus issue, based on dialogue and diplomacy and says he hopes to welcome tangible deeds by Turkey that substantiate this claim in the near future.