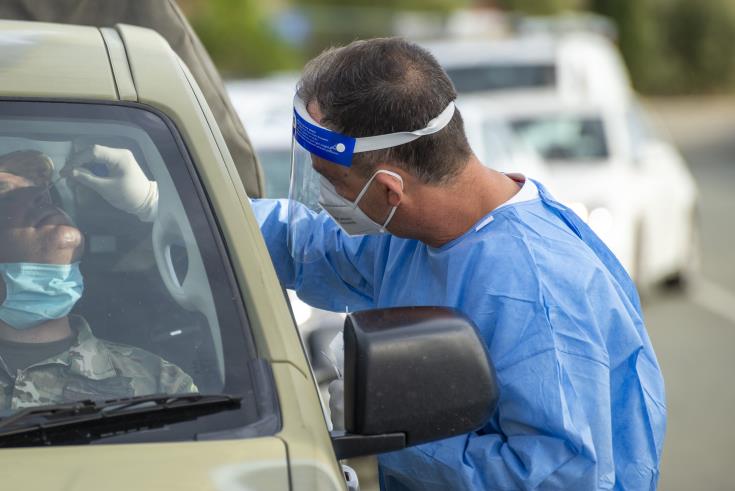 Cyprus’ Ministry of Health continues on Sunday a mass testing program for COVID-19, with mobile units taking samples in a number of areas across Cyprus.

The mobile units conduct rapid antigen tests, with the aim of testing a larger number of citizens and forming a more precise picture of the extent of infections in the community.

The program is addressed to all citizens and especially to those serving the public, distributors and front-line professionals.

Mobile testing units are also carrying out PCR tests across the island on employees who are exempt from a prohibition of movement to and from Limassol and Pafos districts but who have to present a negative PCR test to the police when travelling to and from these districts.

Police said on Sunday that in the last 24 hours they had to ask a total of 222 people to turn around at the temporary checkpoints set up for checks near the locked down districts because they failed to meet the required criteria.

Meanwhile, police in Limassol prevented on Saturday night a protest in downtown Limassol. A number of people who had started gathering to protest the imposition of increased restrictions in the district to curb the spread of the pandemic dispersed peacefully, following instructions from the police. A 21-year-old man was arrested later for throwing and possessing fire crackers.

Police in Pafos who were also on high alert after information for possible gatherings of people in Pafos to protest against measures to tackle the spread of coronavirus, arrested a woman who allegedly incited the public to mass gatherings on an online social networking platform.

In the last 24 hours the police booked 51 individuals and 3 establishments throughout Cyprus for violating the measures in place. A police spokesperson told the Cyprus News Agency that a total of 2,686 checks were carried out during the last 24 hours.

By Josephine Koumettou
Previous articleCypriot Foreign Minister to meet with his Slovak counterpart in Nicosia
Next articleUK’s Sunak: no return to austerity in new spending plan