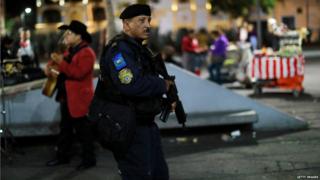 Gunmen with rifles and pistols killed three people on Friday and injured at least seven in a tourist plaza in downtown Mexico City, according to Mexico police.The armed men opened fire at a road crossing on the edge of the Plaza Garibaldi, a major tourist attraction packed with mariachi bars, police said.

The gunmen then fled from the scene on motorbikes.Plaza Garibaldi borders the notorious Tepito district, home to the violent La Union drugs gang.