Maria Kalogeropoulou Callas, The Woman and The Artist 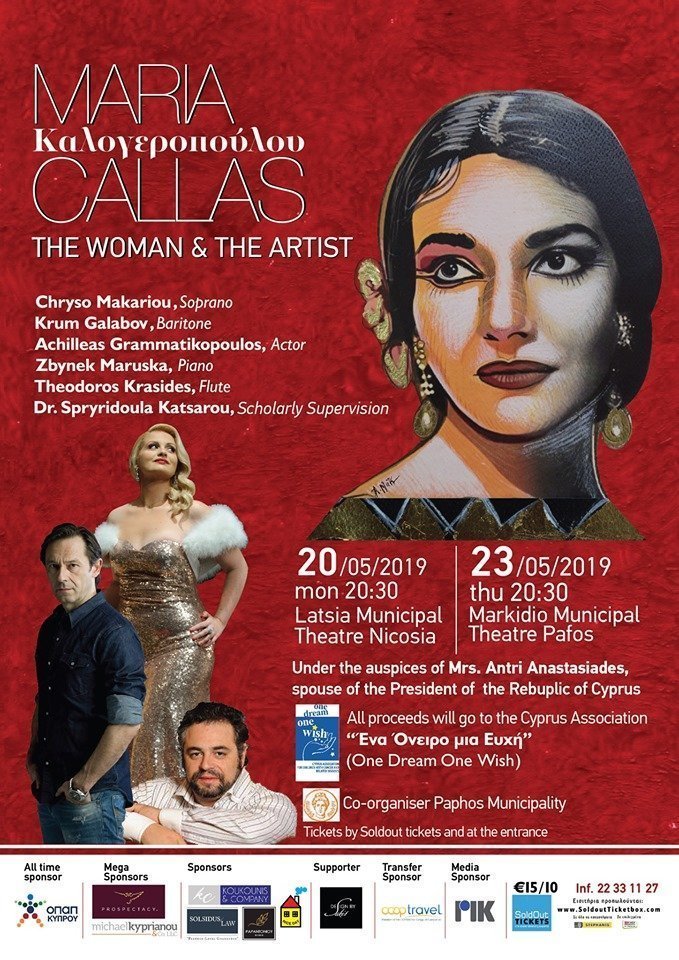 Τhe performance “Maria Kalogeropoulou Callas, The Woman and The Artist”, after its great success in Limassol in February returns to Cyprus for two unique appearances on 20th May at the Municipal Theater in Latsia/Nicosia and on 23rd May at Markidio Municipal Theater in Pafos at 20:30.

The event is the greatest homage ever presented in Cyprus about the life and work of the most important soprano of 20th century Maria Kalogeropoulou, known as Maria Callas (1923-1977). The performance presents her artistic career, from her early steps in the field of lyrical theater to her unexpected death.

Word and music are combined harmoniously by the two protagonists, the soprano Chryso Makariou and the actor Achilleas Grammatikopoulos. Mr Grammatikopoulos plays the role of a director who is about to direct a production regarding the Greek Diva but does not know enough about her and Ms Makariou presents with her vocal skills the role-heroines that marked and established Callas as the absolute Opera Diva. The two protagonists are accompanied by the internationally renowned Bulgarian Baritone Krum Galabov, the Pianist Zbynek Marouska and the on the flute by Theodoros Krasidis.

The conception of the event combines, in addition to the interpretation of the most characteristic arias and opera scenes of Callas, audiovisual material in the form of collages, rare photographic material and interviews. The tremendous work of the research was undertaken by the Historian Musicologist Dr Spyridoula Katsarou, while the editing was made by Maria Avraam. The monologue / narrative is based on unique sources and archives amongst others such as the one of ERT (Greek National Television), the National Opera of Athens, the National Conservatory of Athens, as well as large collections of personal items and letters by Maria Callas from private collectors.

The Homage aims at the most complete presentation of Maria Kalogeropoulou as a personality with specific ideas and perceptions about art and especially about opera, as a person in all its dimensions and expressions as a continuously evolving musician in dialogue with her audience, as a creator of a particular image: La Callas.

The performance is organized by the Cyprus Association “One Wish, One Dream” (Ena Oneiro Mia Efxi) supporting children suffering from cancer and related diseases. The evening, apart from its charitable character, is also a high contribution to Cyprus culture, since it is the biggest tribute to Callas that has been held so far in Cyprus.

The event is under the auspices of the First Lady, Mrs Andris Anastasiadis, wife of the President of the Republic of Cyprus and High Protector of the Cyprus Association “One Wish, One Dream”.

Tickets are available from Soldout Tickets online, at all So Easy kiosks in all cities, at all Stephanis electronics shops, in Paphos at Time Out kiosk and also on the day of performances at the Box office of the theatres.