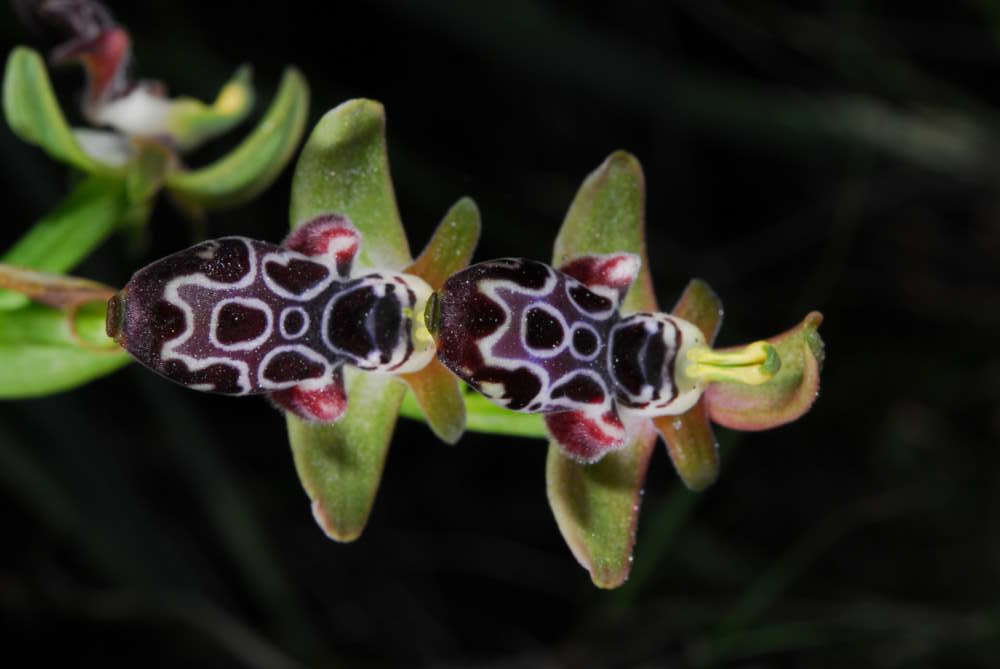 The Ministry of Agriculture introduces the rare Cypriot orchid Ophrys kotschyi, commonly ‘melissaki’ that blooms in March and April as part of its regular feature that aims to present to the public some of the 141 species and sub-species of plants that only grow in Cyprus.

This beautiful but vulnerable species that is among the emblematic plants of the island and can be widely found in the central, southern and northern part of Cyprus, with at least 35 locations having been confirmed in areas controlled by the Republic of Cyprus. The flower grows in humid and shady places such as shrubs, sparse pine forests, field boundaries and meadows, from 0 to 900 meters above sea level.

The name of the genus Ophrys comes from an ancient Greek word that means eyebrow and represents the hairy edge of the flower bud found in many species. The adjective kotschyi was given to the species in honour of Austrian botanist Karl Georg Theodor Kotschy (1813–1866), who first discovered it. The common name ‘melissaki’ (little bee) is due to the resemblance of the flower to a bee.

The genus Ophrys has two distinct features: The first is its mode of reproduction, which is done by manipulating male insects. Specifically, the plants developed visual, tactile, and olfactory stimuli that mislead male insects into pseudocopulation, thereby transferring pollen from one plant to another.

The second feature of the genus is related to the structure of the flower, whose lower petal (lip) has been morphologically differentiated to resemble a female and thereby attract male insects to pollinate it.

Texture, shape, colour, and lip design are important features for identifying the species. The genus Ophrys encompasses about 200 species and subspecies spread throughout Europe, North Africa, the Middle East and the Canary Islands. In Cyprus it is represented by 16 species and subspecies as well as several hybrids.

10-30 cm high, with globular or oval tubers. 3-6 leaves, elliptic to lanceolate, 4-8 x 1.5-2.5 cm, most in rosettes. Inflorescence with 3-10 flowers, in spiral arrangement on top of the shoot. 3 sepals, green or slightly pink. 3 petals — the two lateral ones are olive green with a reddish hue. The lip is elliptic to narrowly oval, 12-15 mm long of a dark purple or brown  colour.

Although the species is widely spread, it usually occurs in small groups of 10-50 plants and rarely in colonies larger than 100 plants. Its total population in areas controlled by the Republic of Cyprus is around 3000 plants, however the population fluctuates significantly depending on the weather.

Because most subpopulations of the species occur at low altitudes, in areas severely affected by human activity, the population is declining and some areas near urban centres have been destroyed or degraded. The main threats to the species are housing and tourism development, road construction, land clearing for various purposes, and the species’ inability to intrinsically reproduce.

Ophrys kotschyi is included in Annexes II & IV of the Habitats Directive (92/43 / EEC), which means that its conservation requires the designation of Special Areas of Conservation (Natura 2000 Areas). In addition, it is included in the Cyprus Red Book of Flora, where it is characterised as Vulnerable. Five areas have been included in the Natura 2000 Network to protect the species, the most important being the Mitsero-Agrokipia area (CY2000003) and the Mammari-Denia area (CY2000001).