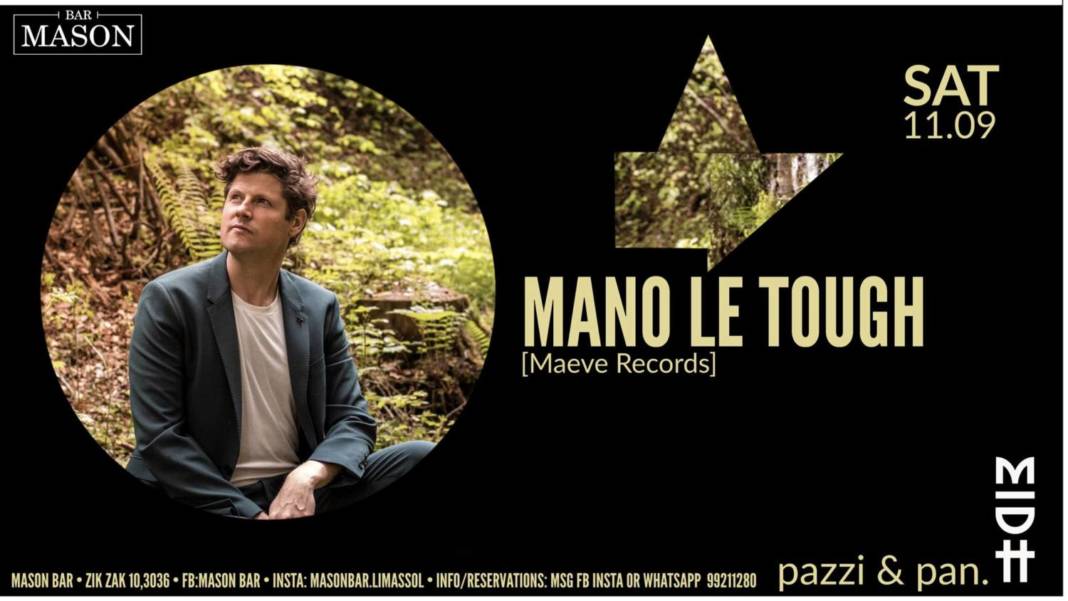 Mano le Tough moved from Dublin to Berlin in his twenties, and is currently located near Zurich, Switzerland. He grew up in a small village in Wicklow, on Ireland’s east coast, where his earliest musical memories involved taping Talking Heads and Fine Young Cannibals off the radio as a seven-year-old, before he heard the siren song of dance music on local pirate radio.
After playing in bands during a reasonably diverse musical adolescence, he had returned to
house and techno by his twenties, diving headfirst into the nascent MySpace culture around
2007. The first track he ever finished, Warhorn, was fortuitously spotted by producer and True Romance labelhead, Tensnake, fifteen minutes after it had finished uploading.
He moved to the German capital shortly afterward, steadily growing his audience as gigs and releases accumulated. His singles soon became mainstays in sets around Berlin and the wider world, adored for their unique melody- driven and disco-flecked house, while his albums Changing Days and Trails (both on Permanent Vacation) saw him channelling deeper water, underlain with intricate arrangements and the stripped back intimacy of his own voice.
In 2012, he founded a label of his own with close friends The Drifter and Baikal. Maeve Records immediately became an essential stable for eclectic, forward- thinking dance music from its three founders, and carefully curated releases by the likes of Isolée, Phil Kieran, New Jackson and Kev Sheridan.
As well as dozens of releases, two full length albums, and remixes for, among others, The Pet Shop Boys, Roisin Murphy, Caribou and Erol Alkan, Mano became one of Europe’s most
in-demand DJs, with headline performances across the continent’s dancefloors and the world’s biggest music festivals. Since early 2020, however, he’s been at home, attempting to channel inspiration from eighteen months without live music, amid the anxiety of a global pandemic.
“I’ve always liked that Mallarmé quote, “poetry is the language of crisis”. It’s hard for me to make good music about everything being amazing. Anything I’ve done that had any kind of artistic merit has been through struggles I’ve had”.
For Mano, these feelings have found their truest expression in “At The Moment”, a record which balances the ambivalence and melancholy of the last year, with wistful streaks of unguarded optimism.
Supported by: Pazzi & Pan.
Info/Reservations:  What’s app at 99 211280
When Saturday, September 11 at 9pm
Where 10 Zik Zak Street 3036 Limassol, Cyprus
Facebook
Location Mason Bar, Limassol
By Lisa Liberti
Previous article22-year-old in jail for possession of one kilo of cannabis
Next articleRapid antigen testing units – Wednesday, 8 September 2021; who is eligible