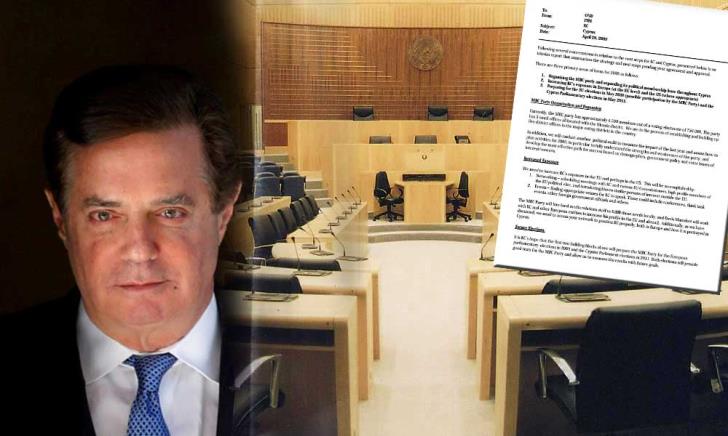 Paul Manafort, the convicted former campaign chairman of Donald Trump, had drawn up a strategy to promote a  political party in Cyprus for the 2009 European Parliament elections and the 2011 parliamentary elections, according to a 2009 memo published on Twitter by New York Times journalist Kenneth P Vogel.

Manafort has pleaded guilty to a range of federal charges from money laundering to unregistered lobbying.

On Twitter,  Vogel wrote: “While @TIME focused on efforts by MANAFORT & DERIPASKA to advance pro-Russian interests in Montenegro, the duo also waded into other countries’ elections. This memo reveals that they backed a political party in CYPRUS.”

INTERNATIONAL ELECTION INTERVENTION: While @TIME focused on efforts by MANAFORT & DERIPASKA to advance pro-Russian interests in Montenegro, the duo also waded into other countries’ elections. This memo reveals that they backed a political party in CYPRUS. https://t.co/ryHxwaB9j5 pic.twitter.com/L7GaQP0fvL

He attaches a copy of the memo dated April 20,  2009 in which Manafort informs the Russian oligarch Oleg Deripaska, about his plans to promote ‘KC’ and the party ‘MRC’.

Manafort notes that the MRC Party has 4500 members, three small offices in Nicosia and was in the process of establishing parties in the five voting districts.

And he adds: “We need to increase KC’s exposure in the EU and perhaps in the US.” This will be accomplished by networking-scheduling meetings with KC and various EU Commissioners, high profile members of the EU political elite and introducing him to similar persons of interest outside the EU.

Moreover, appropriate venues will be found for KC to speak that could include conferences, think tank events, other foreign government officials and others.

“The MRC Party will hire local media relations staff to fulfil those needs locally…. Additionally, as we have discussed we need to access your network to position KC properly both in Europe and how it is portrayed in Cyprus,” the memo adds.