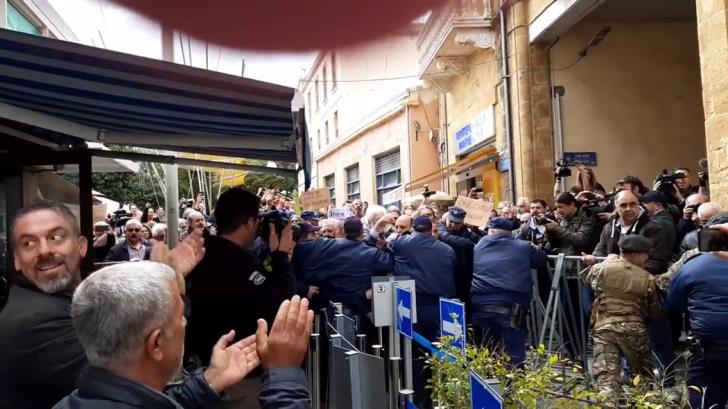 A 55 year old man caught on video appearing to assault a young national guard soldier during protests over the closure of Ledra Street checkpoint was remanded in police custody for two days on Sunday to facilitate police investigations.

The man was arrested on Saturday evening and appeared before Nicosia district court on Sunday where police asked that he be remanded in custody.

His lawyer did not object to the remand but said that his client reserved all his rights.

Earlier on Sunday, police had announced that the man had given a written statement in connection with the incident. He was then re-arrested for unlawful assembly and causing a disturbance.

The suspect was among scores of demonstrators protesting the government’s decision to temporarily suspend operation of four checkpoints as part of measures to prevent the spread of coronavirus.

They managed to break through the barricades erected at the checkpoint and enter the buffer zone where they were joined by Turkish Cypriots demanding the government reverse the decision they said was hampering free movement.

No incidents of the virus have been reported on either side of the Green Line. But the government said the measures were necessary to free resources so that screening can be carried out at the other checkpoints.

Turkish Cypriot leader Mustafa Akinci has also criticised the measure, saying it “had nothing to do with the coronavirus” and “separated rather than united the two communities.”

By In Cyprus
Previous articleLarnaca to hold carnival fiesta this afternoon; parades also in Paphos and Limassol today
Next articleCoronavirus: New travel advice from foreign ministry