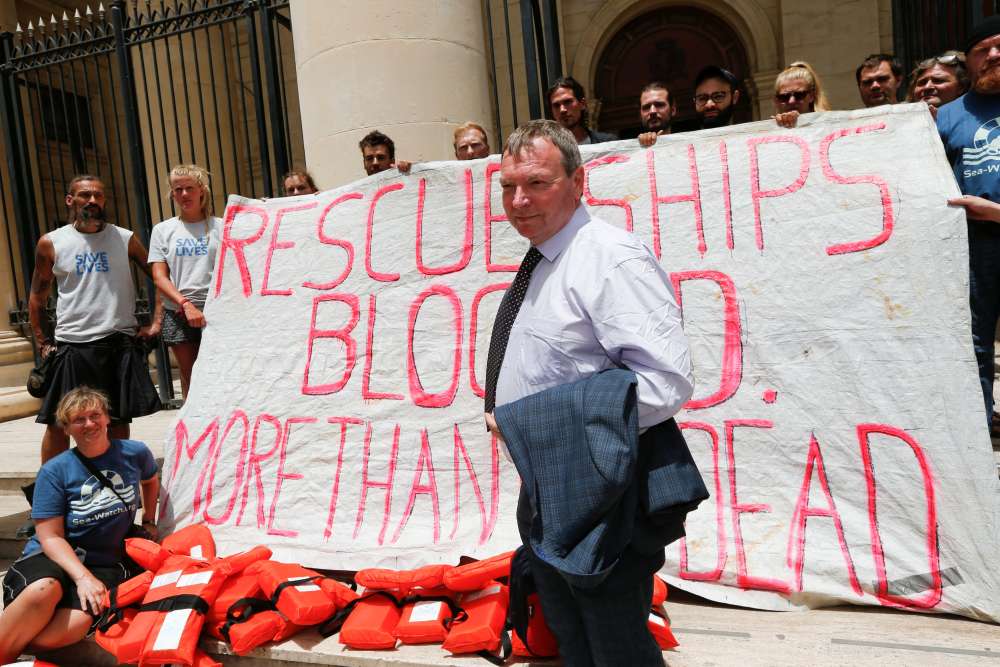 For the second time in a week, Malta on Monday detained a humanitarian vessel that normally rescues boat migrants off the coast of Libya, where two shipwrecks have claimed the lives of as many as 200 people in recent days.

The Sea Watch 3 vessel, operated by a German charity, requested to leave port after undergoing maintenance and the port authority refused, a Sea Watch spokeswoman said. The port authorities said only that the vessel’s status was under review.

Another humanitarian ship, Lifeline, was detained last week after Malta for the first time in years opened its port to a large number of migrants, some 230, when Italy refused it safe haven. A new Italian government including the League, a far right anti-immigrant party, took power last month and has shut Italian ports to charity ships carrying migrants.

Lifeline’s captain attended a court hearing in Malta on Monday in which the prosecutor said the ship was not properly registered. The groups operating both ships deny any wrongdoing.

“They are creating the conditions to make it impossible for non-governmental groups to operate at sea,” Sea Watch’s Giorgia Linardi said. “Against this background, people are dying and no one seems to care.”

In two separate incidents, as many as 204 migrants have drowned since Friday after being packed into unsafe vessels by smugglers, the International Organization for Migration (IOM) has said. The incidents raised the toll for this year above 1,000 people lost at sea.

The humanitarian groups say they are being wrongly targeted by governments — Malta and Italy — that are seeking to stem migrant arrivals to Europe, and they say the policy spearheaded by the new Italian government is causing deaths.

Italy’s far-right interior minister says the rescue ships are colluding with Libyan smugglers, a charge never proven in court and denied by the rescuers. Malta said last week it would no longer provide logistical support to the vessels under the suspicion they were acting illegally.

The flow of migrants into Europe has abated since a 2015 peak, with the number attempting the dangerous sea crossing from North Africa to Italy falling to tens of thousands from hundreds of thousands. The other main route, from Turkey to Greece, used by more than a million people in 2015, was shut two years ago.

But the journey by land through the Sahara and then across the Mediterranean remains world’s deadliest migration route, and as polarising as ever in European politics. In addition to Italy, anti-immigrant parties are now firmly entrenched in the ex-Communist states of central Europe and won seats in the German parliament for the first time since the 1940s last year.

In Germany, the issue threatens to bring down Angela Merkel’s ruling coalition.

A humanitarian boat run by Spanish charity Proactiva Open Arms is heading for Spain carrying 59 migrants after Italy and Malta refused it a port, the third such case in less than a month.

During a hearing on Monday, Malta police inspector Mario Haber questioned whether the Lifeline ship, which says it operates under a Dutch flag, should have been registered as a yacht instead of a commercial vessel.

“The yacht is not registered with the Netherlands. It is registered with a Dutch yacht club but it isn’t the flag state,” Haber said. The court appointed “experts” to board the ship and inspect its contents, including its computers, with the prosecution saying it could not rule out charges.

Magistrate Joe Mifsud set bail at 10,000 euros for Lifeline captain Claus-Peter Reisch, adding that he must stay on his ship and cannot leave the small island state. Another hearing will be held on Thursday.

“What kind of world are we living in when sea rescuers are criminalised?” Reisch said in a statement before the hearing