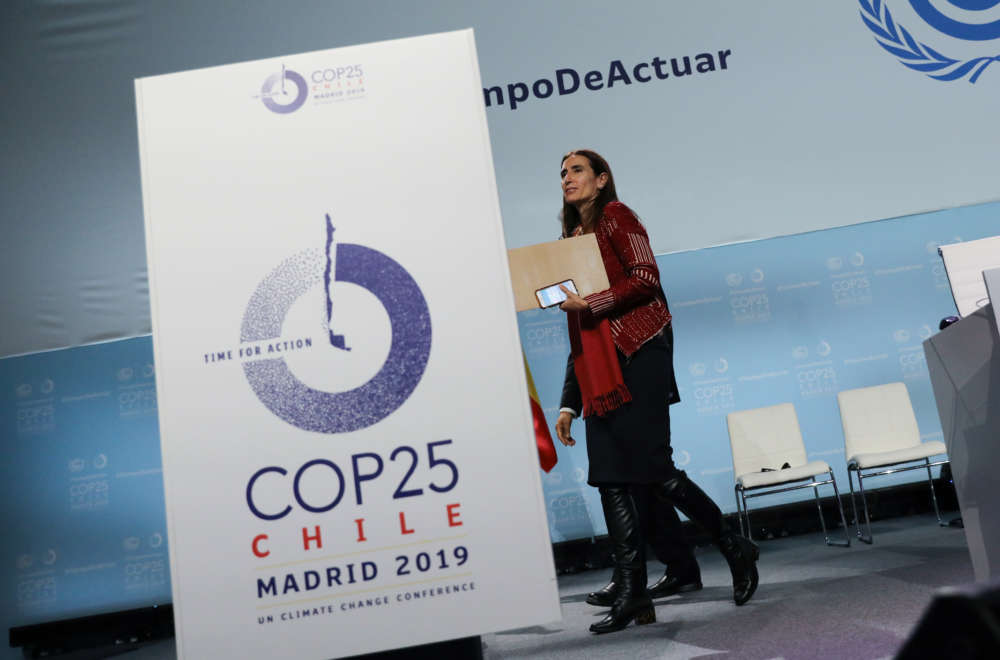 A handful of major states resisted pressure on Sunday to ramp up efforts to combat global warming as a U.N. climate summit ground to a close, angering smaller countries and a growing protest movement that is pushing for emergency action.

The COP25 talks in Madrid were viewed as a test of governments’ collective will to heed the advice of science to cut greenhouse gas emissions more rapidly, in order to prevent rising global temperatures from hitting irreversible tipping points.

But the conference, in its concluding draft, endorsed only a declaration on the “urgent need” to close the gap between existing emissions pledges and the temperature goals of the landmark 2015 Paris climate agreement – an outcome U.N. Secretary-General Antonio Guterres called disappointing.

Many developing countries and campaigners had wanted to see much more explicit language spelling out the importance of countries submitting bolder pledges on emissions as the Paris process enters a crucial implementation phase next year.

“These talks reflect how disconnected country leaders are from the urgency of the science and the demands of their citizens in the streets,” said Helen Mountford, Vice President for Climate and Economics, at the World Resources Institute think-tank. “They need to wake up in 2020.”

The lack of a strong outcome to reinforce the Paris accord raises the stakes for the next big climate summit, in Glasgow in November next year. As hosts, British Prime Minister Boris Johnson’s government faces the task of persuading countries to submit more ambitious plans to cut carbon emissions.

The Madrid summit had been due to end at the two-week mark on Friday but ran on for two extra days – a long delay even by the standards of often torturous climate summits.

After final decisions were made, Chile’s environment minister Carolina Schmidt – who served as president of the talks – said she was “of mixed emotions”.

The country had earlier triggered outrage after drafting a version of the text that campaigners complained was so weak it betrayed the spirit of the Paris Agreement.

‘A CRIME AGAINST HUMANITY’?

The process set out in the Paris deal hinges on countries ratcheting up emissions cuts next year.

The final draft did acknowledge the “significant gap” between existing pledges and the temperature goals adopted in 2015.

Nevertheless, it was still seen as a weak response to the sense of urgency felt by communities around the world afflicted by floods, droughts, wildfires and cyclones that scientists say have become more intense as the Earth rapidly warms.

Guterres, who opened the talks on Dec 2., said he was “disappointed”.

“The international community lost an important opportunity to show increased ambition on mitigation, adaptation and finance to tackle the climate crisis,” he said in a statement. “We must not give up and I will not give up.”

Delegates drew some consolation from an agreement reached in Brussels last week by the European Union’s 28 member states, bar Poland, to reach net zero carbon emissions by 2050, under a “Green Deal” to wean the continent off fossil fuels.

“It seems that EU now needs to be the leader and we want to be and we are going to be and that is what we are doing,” said Krista Mikkonen, Finland’s environment minister and the EU’s representative at the talks.

The negotiations became mired in disputes over the rules that should govern international carbon trading, favoured by wealthier countries to reduce the cost of cutting emissions. Brazil and Australia were among the main holdouts, delegates said, and the summit deferred big decisions on carbon markets.

“As many others have expressed, we are disappointed that we once again failed to find agreement,” said Felipe De Leon, a climate official speaking on behalf of Costa Rica.

Smaller nations had also hoped to win guarantees of financial aid to cope with climate change. The Pacific island of Tuvalu accused the United States, which began withdrawing from the Paris process last month, of blocking progress.

“There are millions of people all around the world who are already suffering from the impacts of climate change,” Ian Fry, Tuvalu’s representative, told delegates. “Denying this fact could be interpreted by some to be a crime against humanity.”