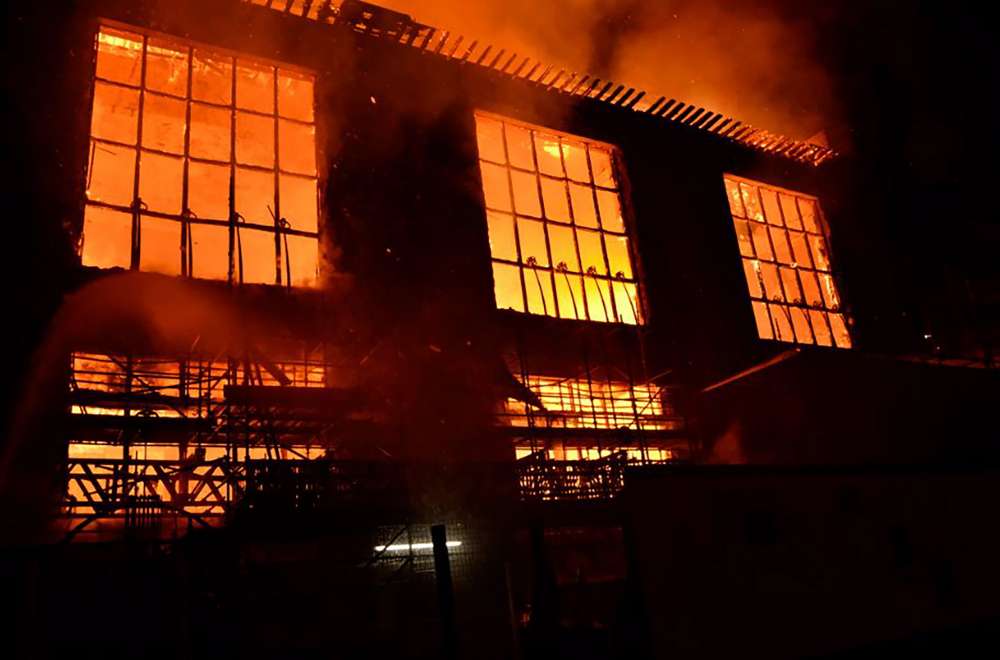 A major fire has torn through one of Scotland’s architectural gems, the Mackintosh building at the Glasgow School of Art, for the second time in four years.

More than 120 firefighters fought the blaze during the night as it gutted the 1909 building and spread to a theatre and a nearby night club. No casualties were reported.

“The extent of the damage is very severe,” Peter Heath, deputy assistant chief officer of the Scottish Fire and Rescue Service, told reporters at the scene in Glasgow city centre on Saturday morning.

The fire “has reached from the ground floor right through to the roof,” he said.

By morning the fire was under control, but smoke was still rising from the building as firefighters sprayed it from tall ladders. Heath said the theatre was still on fire and its roof had partly collapsed, but the blaze was no longer spreading.

The Mackintosh building had been due to re-open next year after millions of pounds in restoration works following a fire in May 2014.

“My first thoughts tonight are for the safety of people — but my heart also breaks for Glasgow’s beloved School of Art,” Scottish First Minister Nicola Sturgeon said on Twitter.

The Mackintosh building is named after its architect, Charles Rennie Mackintosh, Scotland’s most influential designer. The School of Art’s website says the building “heralded the birth of a new style in 20th century European architecture”.

Heath said fire crews were called about 20 minutes before midnight on Friday, and by the time they arrived fire had already spread to the whole building.

The area was quickly evacuated and cordoned off. It remained inaccessible to the public on Saturday morning.

“This is a devastating loss for Glasgow, absolutely devastating,” Heath said.

By In Cyprus
Previous articleUpdated: Man held in Paphos for sexually harassing teen girl
Next articleA scary thought: Germany is better prepared than in 2014