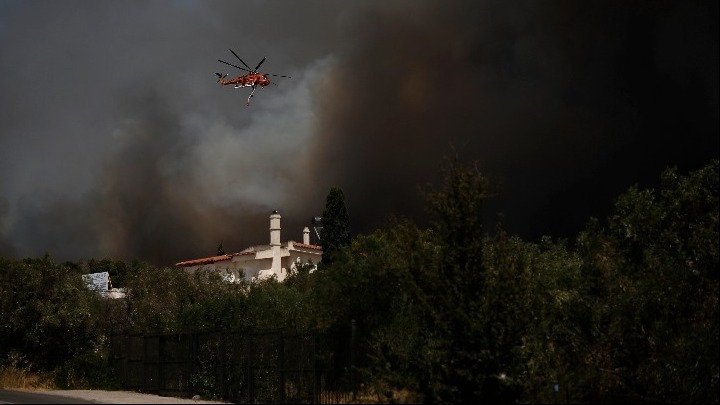 A big wildfire broke out on Tuesday afternoon in a forest near the former royal estate in Varybobi. The fire department immediately mobilised and sent 60 fire-fighters with 20 fire engines, two team of fire-fighters on foot, four helicopters and four aircraft to put out the blaze. Among the aircraft is a Russian Beriev 200 aircraft.
The fire fighting effort is being coordinated by the chief of the fire brigade, Lieutenant General Stefanos Kolokouris.

The Athens-Lamia national highway was closed to traffic in both direction on Tuesday afternoon due to the ongoing Varybobi fire. According to the police, the lanes for Lamia have been closed from Lykovrisi and those toward Piraeus from the Agios Stefanos exit.

The wildfire spread quickly due to the dry conditions, despite the lack of strong winds and the efforts of fire-fighting forces to contain it quickly.
The Civil Protection service sent a message to residents of Varybobi and Kryoneri via the European emergency number 112, advising them that a forest fire was underway in their area and urging them to seal their chimneys, doors and windows to prevent flaming cinders from entering their homes. It also called on them remaining on alert for further instructions from the authorities.
While the lack of strong winds is a positive sign, there have also been a number of explosions whose source has yet to be identified and will be clarified once the fire is under control.
The police have stopped the movement of vehicles on the Tatoiou Road between Kymis Avenue and Erithrea Road, on Erithrea Road between the Varybobi bridge and on Tatoiou from Parnithos Road (Ippokratios Politia).

By gavriella
Previous articleMoses Moiseos at Kesh for a massive performance on Friday, August 6
Next articleRapid antigen testing units – Wednesday 4 August 2021; who is eligible