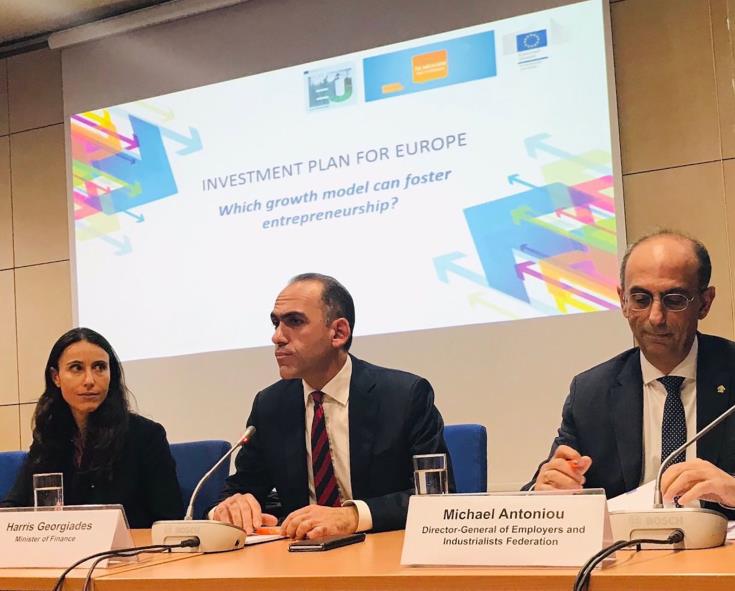 The practices of maintaining large deposits by non-EU citizens accompanied with shell companies (companies with no physical presence) are finished, Cyprus Minister of Finance Harris Georgiades has said, stressing that Cyprus will not maintain such practices that contributed to the financial meltdown of 2013.

“This, and we should acknowledge it, was the model for a very large sector of the economy, that of the services,” Georgiades said during a discussion hosted by the European Commission Representation to Cyprus on the future model of the economy.

“When we speak of the services sector, essentially we mean extremely large foreign deposits, not investments, in the banking system which turned out to be a problem,” he said.

He referred to press reports that deposits by non-EU citizens, mainly that of Russian citizens are declining.

“In the past years, foreign deposits, mainly deposits from Russia declined drastically. Let’s be honest, we had billions and billions of deposits along with a company that nothing but a shell with no employees and no physical presence,” he said.

According to Moody’s, at their peak in April 2012, deposits from residents of countries outside the EU climbed to €21.9 billion, exceeding the size of the domestic economy. Following a sharp decline in 2013 due to the conversion of deposits to equity in Bank of Cyprus, and now-defunct Laiki Bank, which was liquidated, the volume of non- EU deposits declined to €7.1 billion as of September 2018, accounting for 15% of total deposits.

The Central Bank published a circular defining a shell company as an entity that has no physical presence other than a mailing address, no established economic activity in the country of incorporation, or has little to no independent economic value, advising Cypriot banks to avoid engaging in business ties with such companies.

“This is over, its finished. Even if we wanted to continue with such a model we can’t, and there is no desire for such model anymore,” Georgiades added, adding what’s important are companies with physical presence.

The Cypriot Finance Minister pointed out that companies with physical presence are being established in Cyprus in sectors such as shipping and fund management, having Cyprus as their base.

Sofronis Clerides, Professor or Economics in the University of Cyprus said maintaining money in a bank is not an investment. An investment would be putting money to finance a company, he said. Investments, Clerides added, are the actions that increase productivity and create jobs and not just a mere deposit and the purchase of real estate.

He also highlighted the need for the attraction of Foreign Direct Investment which would create real growth.

Michalis Antoniou, the Federation of Employers and Industrialists General Director, highlighted the need for structural reforms that would keep the economy on a positive track, stressing the need for the regulation of the right to strike in key sectors.

Melina Skouridou an analyst in Moody’s rating agency said the Cyprus banking sector is moving towards the right direction, but still faces significant challenges due to the large stock of non-performing loans.

Noting that significant progress has been achieved, Skouridou added that the agency maintains its ratings for the Cypriot bank on positive outlook, reflecting the agency expectation that the sector will make further progress in reducing NPLs and return to profitability.

“There is no magic wand in the reduction of NPLs,” she went on to say, adding that along with macroeconomic developments such as the reduction of unemployment and economic growth, bans should employ all tools at their disposal.

She however cautioned over the slow pace of corporate loans restructuring, the low number of asset sales through auctions of primary residents pledged as collateral and the delay in contract enforcement, a key element for an efficient banking sector.

He however pointed out that Cyprus enjoys one of the largest budget surpluses in the EU accompanied by robust growth which lead to the return of the Cypriot rating to investment-grade territory.

“This is a positive development enabling us to see the glass as half-full. There was progress, let us recall where Cyprus was in 2013, but more effort is needed,” he said.

EpidemiologiThe scientific team of the Health Ministry is ready to include colchicine in the treatment protocol to face COVID-19, Konstantinos Tsioutis, assistant professor of...

As of this morning, the Vaccination Portal is available for citizens over 90 years of age. According to the Health Ministry, until 1:00, some 1,100...
Read more

EpidemiologiThe scientific team of the Health Ministry is ready to include colchicine in the treatment protocol to face COVID-19, Konstantinos Tsioutis, assistant professor of...

The scientific team of the Health Ministry is ready to include colchicine in the treatment protocol to face COVID-19, Konstantinos Tsioutis, assistant professor of...
Read more
Local