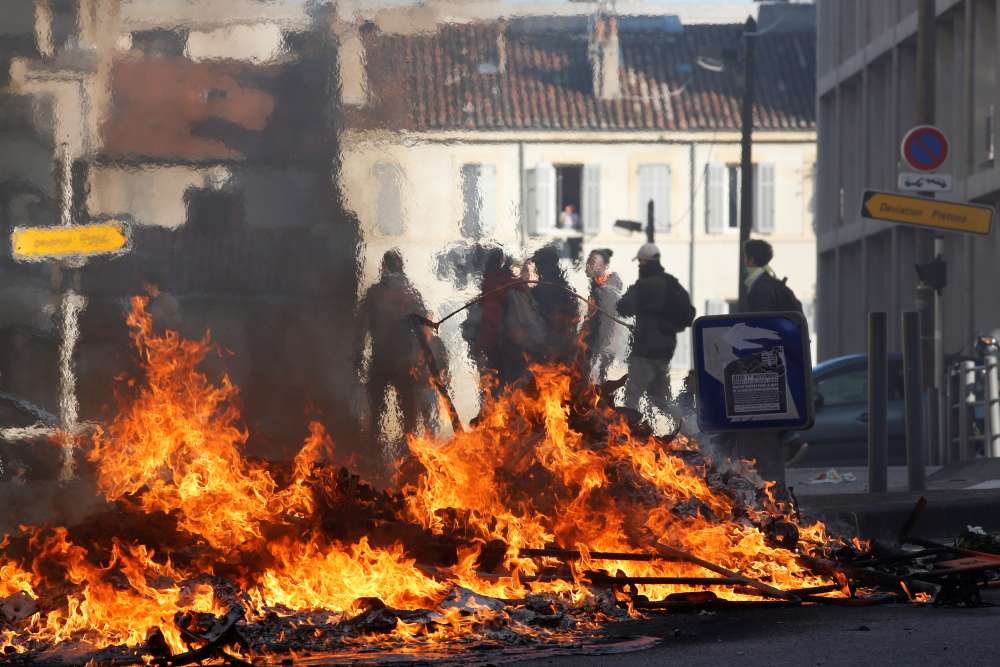 French authorities warned another wave of “great violence” and rioting could be unleashed in Paris this weekend by a hard core of ‘yellow vest’ protesters, as senior ministers sought to defuse public anger with conciliatory languages on taxes.

Despite capitulating this week over plans for higher fuel taxes that inspired the nationwide revolt, President Emmanuel Macron has struggled to quell the anger that led to the worst street unrest in central Paris since 1968.

Rioters torched cars, vandalised cafes, looted shops and sprayed anti-Macron graffiti across some of Paris’s most affluent districts, even defacing the Arc de Triomphe. Scores of people were hurt and hundreds arrested in battles with police.

An official in Macron’s office said intelligence suggested that some protesters would come to the capital this Saturday “to vandalise and to kill.”

Prime Minister Edouard Philippe said 65,000 security personnel would be deployed across the country on that day to keep the peace.

In a bid to defuse the three-week crisis, Philippe had told parliament late on Wednesday that he was scrapping the fuel-tax increases planned for 2019, having announced a six-month suspension the day before.

Finance Minister Bruno Le Maire told a conference he was prepared to bring forward tax cutting plans and that he wanted workers’ bonuses to be tax-free.

But he added: “In this case, it must go hand-in-hand with a decrease in spending.”

He also said France would impose a tax on big internet firms in 2019 if there was no consensus on a European Union-wide levy, seeking to appeal to the “yellow vests'” anti-business sentiment.

The threat of more violence poses a security nightmare for the authorities, who make a distinction between peaceful ‘yellow vest’ protesters and violent groups, anarchists and looters from the deprived suburbs who they say have infiltrated the movement.

On Facebook groups and across social media, the yellow vests are calling for an “Act IV”, a reference to what would be a fourth weekend of disorder.

“France is fed up!! We will be there in bigger numbers, stronger, standing up for French people. Meet in Paris on Dec. 8,” read one group’s banner.

Several top-league soccer matches on Saturday have been cancelled and the Louvre museum said it and others were awaiting word from Paris officials on whether to close their doors.

The protests, named after the fluorescent jackets French motorists are required to keep in their cars, erupted in November over the squeeze on household budgets caused by fuel taxes. Demonstrations swiftly grew into a broad, sometimes-violent rebellion against Macron, with no formal leader.

Their demands are diverse and include lower taxes, higher salaries and Macron’s resignation.

France’s hard-left CGT trade union on Thursday called on its energy industry workers to walk out for a 48 hours from Dec. 13, saying it wanted to join forces with the yellow vests. The movement, with no formal leader, has so far not associated itself with any political party or trade union.

The fuel-tax volte-face was the first major U-turn of Macron’s 18-month presidency.

The unrest has exposed the deep-seated resentment among non-city dwellers that Macron is out-of-touch with the hard-pressed middle class and blue-collar labourers. They see the 40-year-old former investment banker as closer to big business.

Trouble is also brewing elsewhere for Macron. Teenage students on Thursday blocked access to more than 200 high schools across the country, burning garbage bins and setting alight a car in the western city of Nantes.

Meanwhile, farmers who have long complained that retailers are squeezing their margins and are furious over a delay to the planned rise in minimum food prices, and truckers are threatening to strike from Sunday.

Le Maire said France was no longer spared from the wave of populism that has swept across Europe.

“It’s only that in France, it’s not manifesting itself at the ballot box, but in the streets.”