M. Palmer: US has made clear to Turkey that its actions in the E. Mediterranean are provocative (vid) 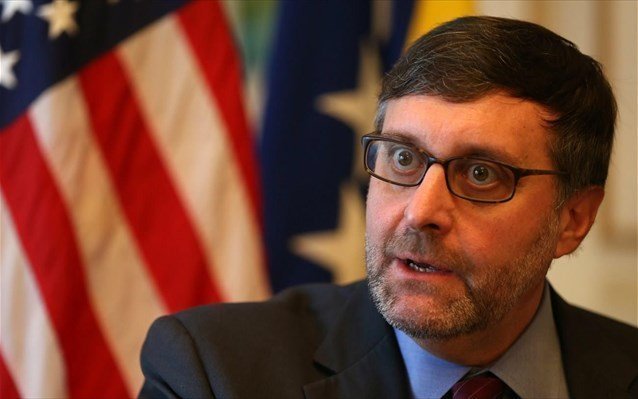 The US has made clear to Ankara that is considering the actions that Turkey has undertaken in terms of its announced intentions to begin drilling in the Eastern Mediterranean as provocative and has encouraged Turkey to stop those actions, US Deputy Assistant Secretary for European and Eurasian Affairs, Matthew Palmer, has told the Cyprus News Agency (CNA).

Invited to say, during an interview to the Agency, after a series of meetings he held in Cyprus, if the US administration has contacted Turkish officials and has conveyed the US position on the issue, Palmer said that “we have done that privately and we have done it publicly”.

Asked about his meetings on the island and the outcome of his discussions, Palmer who had served at the US Embassy in Nicosia from 2003 to 2006, noted that “some things have changed while I have been away. Some things remain the same. Cyprus sadly remains divided but the United States remains committed to the reunification of the island as a bizonal, bicommunal federation. We remain strongly supportive of the UN-led process of negotiations. We would like to see the island reunified, we would like to see that happen as quickly as possible,” he added.

“We believe that the proceeds from those resources should be shared equitably amongst all the people of the island within a framework of a negotiated settlement. There is a lot on the bilateral agenda as well. I discussed those issues at length in my meetings including with the President, the Foreign Minister. The signing of the Statement of Intent was a significant development in the US-Cyprus bilateral relationship and we are working to implement it and strengthen our cooperation in that spirit,” he noted.

Asked what will the US concretely do in case Turkey insists to its actions in the Eastern Mediterranean, Palmer said: “I don’t want to get into hypotheticals, but what I can tell you is that we’ve made clear to Turkey that we consider the actions that it has undertaken in terms of its announced intentions to begin drilling as provocative and we’ve encouraged Turkey to stop those actions.”

Invited to say if the US administration has contacted Turkish officials, and has conveyed its position to them, Palmer said that “we have done that privately and we have done it publicly”.

Asked about the way the Statement of Intent on security cooperation that was signed last year between the US and Cyprus is being implemented, Palmer said that “since the Statement of Intent was signed by Foreign Minister Christodoulides and then Assistant Secretary Wess Mitchel, there have been a number of developments consistent with the goals and objectives of the statement.”

“There was the 3+1 meeting in Jerusalem in which Secretary of State Mike Pompeo participated along with Prime Minister Tsipras, President Anastasiades and Prime Minister Netanyahu”, he said, noting at the same time the participation of the US in the Argonaut Multinational Civil-Military Cooperation (CIMIC) Exercise that took place recently in Cyprus.

“We continue to discuss ways that we can deepen and strengthen the partnership. The Republic of Cyprus recently sent its first ever defence attaché to the Embassy in Washington, so we are working together to ensure that the Statement of Intent is operationalized and practiced,” he added.

To a remark that speaking during the reception at the US Embassy, on the occasion of the US Independence Anniversary, Cyprus President Nicos Anastasiades referred to specific steps that can be taken to enhance the bilateral relations, such as updating the Avoidance of Double Taxation Agreement, Cyprus joining the Visa Waiver Programme and revoking the embargo on the sale of military and defence related equipment to Cyprus and invited to comment on these steps, Palmer noted that this is a good set of issues to talk through with the Cyprus government.

Asked if he thinks it is anachronistic that there is still an arms embargo on Cyprus, which is a partner of the US, he noted that “Cyprus is a strategic partner, an important partner for the United States and we are being in the process of taking a look at what may be possible in that area. There is a number of different bills that are circulating on Capitol Hill,” he added, noting that “we’ll see what happens on the Hill.”

Invited to say if the US participation in the Trilateral cooperation among Cyprus, Greece and Israel will continue, he noted that “we are committed to continuing our participation in the 3+1. Some of these engagements will be at senior levels but some of it will be at more operational levels, working levels, where we can get experts together from Cyprus, Greece, Israel and the US to work together in pursuit of progress in our shared goals.”

Asked if any meetings have been planned in this framework, Palmer said that there is something that it is upcoming on terrorism, where there will be an expert level discussion “and then moving ahead we can envision any number of possible formats and frameworks where we can continue to deepen and strengthen this 3+1 cooperation. “

Asked if the mandate of the UN peacekeeping force in Cyprus (UNFICYP) should change, given the US position on UN peacekeeping operations, Palmer said that “the position of the US has been clear and it is not specific to UNFICYP or to Cyprus.”

“This is an issue of how it is that the UN conducts its peacekeeping operations. What we want to ensure is that PKOs don’t become a substitute for political processes, they don’t become a substitute for resolution of conflict. And what we want to ensure is that UNFICYP is not envisioned as a perpetual operation, but in fact it is structured in such a way as to support the negotiating process and to help the parties reach an agreement on a bizonal, bicommunal federation. So, we have some principles that underpin our approach towards peacekeeping in general and the question really how do you apply those principles in the case of UNFICYP,“ he added.

To a remark that recently, as in the past, there have been incidences in the buffer zone that indicate the need for the presence of the peacekeeping force in Cyprus, the US officials said: “I understand that position. UNFICYP has played an important role here on Cyprus and continues to play an important role. We do want to ensure going forward that UNFICYP is structured in an appropriate fashion and that it does not in any way substitute for progress on the political front.”

He noted that scheduling a meeting with the President of the United States “is obviously a difficulty thing to do, but we are committed to looking for every opportunity that we can to meet with Cypriot counterparts and to deepen and strengthen cooperation across the full range of issues.”

Cyprus has been divided since 1974, when Turkish troops invaded and occupied 37% of its territory. Repeated rounds of UN-led peace talks have so far failed to yield results. The last round of negotiations, in July 2017 at the Swiss resort of Crans-Montana ended inconclusively.